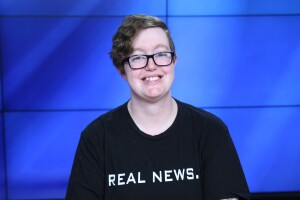 Brooke is the Special Projects producer for KGUN 9 in Arizona by way of Wichita Falls, Texas where she worked at KFDX-TV.

Brooke graduated from Midwestern State University in 2014 where she studied journalism and television production.

She worked on one feature film that will never actually be released.

In her spare time Brooke reads lots of books, skateboards very badly, and watches every popular sitcom on television.