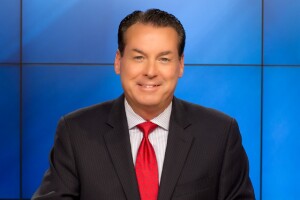 Pat is no stranger to Tucson and KGUN 9. He is a graduate of Sabino High School where he was the 1982 high school state track champion in the 800 meters. While in high school and college, he worked part-time in the KGUN 9 newsroom. His father, Jack Parris, is a former general manager of the station.

Pat attended the University of Arizona and ran track for one year before transferring to Drake University in Des Moines, Iowa. An All-American in track, Pat graduated from Drake with a degree in Broadcast News. He has over 30 years of broadcasting experience and has won four Regional Emmy Awards for broadcasting excellence.

Pat started his on-air career as a sports anchor at WHO-TV in Des Moines. He then moved to WTAE-TV in Pittsburgh in 1996. Five years later he joined FOX Sports Pittsburgh, and eventually FOX Sports Midwest in St. Louis.

Pat jumped at the chance to return to Tucson and KGUN9 in the spring of 2016. He is married and has two grown children. He enjoys hiking, running and playing golf.