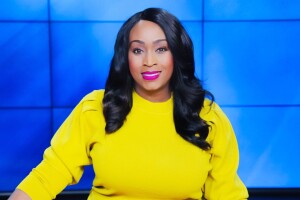 Shawndrea Thomas is living her dream as a journalist who’s passionate about making a difference. She recently finished up a year-long project as the lead investigative reporter in a cold case series for Oxygen network called “The Disappearance of Phoenix Coldon”. Through her work in the series she uncovered new leads, conducted exclusive interviews and discovered new details in the case. The series also helped to shine a light on missing women of color and how infrequently those stories are covered by the media. Shawndrea also made a national appearance on "The Dr. Oz Show" and was featured in both local and national media interviews about the series.

Since finishing up the investigative series Shawndrea decided to continue her work to help families spread the word about their missing loved ones. With that goal in mind she decided to venture into new territory. The determined journalist is now inviting family members and friends of the missing to share their stories on her new podcast called "Intrigued Full Effect". She also discusses unsolved crimes, strange crimes and other topics in the podcast.

The straight talking journalist is driven by a desire to expose injustice and is committed to telling stories that truly reflect the community she lives in. Prior to her Oxygen project Shawndrea spent more than 6 1/2 years as an anchor/reporter at FOX 2/KPLR 11 in St. Louis. While in St. Louis she covered the 2014 unrest in Ferguson, Missouri after the police involved shooting death of Michael Brown. The driven journalist covered the events up close on a daily basis from beginning to end. She even anchored for more than 8-hours overnight relaying minute by minute details to the public during one of the most intense nights of rioting that sparked protests across the country. She also covered historic flooding in the region and spent some time covering American Idol in L.A. On a more personal note Shawndrea also appeared on "The Doctors" to share her story with the world of how she lost her 34-year-old brother Terran Hubbard to melanoma skin cancer to raise awareness about the disease and how it affects people of color.

Before arriving in St. Louis Shawndrea worked as a traffic anchor in Orlando, a reporter at ABC 6/FOX 28 in Columbus, Ohio and reporter/fill-in anchor at NewsWest 9 in Midland, Texas.

Shawndrea holds two Bachelors Degrees from Arizona State University in Broadcast Journalism and Interdisciplinary Studies. She is a member of the National Association of Black Journalists.