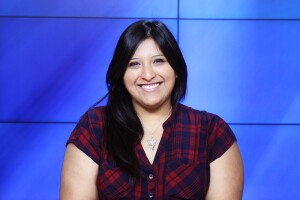 Elizabeth Jimenez, better known as EJ, is the Executive Producer for Good Morning Tucson and Morning Break. EJ joined KGUN9 in June 2017 after working in Beaumont, Texas as a News Producer.

EJ was born in raised in Beaumont, Texas which is just east of Houston. Since a teenager, EJ was involved with production work and grew her talents while helping in independent projects and for her church's broadcasted shows. It was during her college career that she decided to continue pursuing her passion, majoring in Media Production at the University of Houston.

During her time at UH, EJ studied both television and film. She was part of multiple independent projects, including the team that won a national competition for Walmart's advertising campaign. The campaign package aired on television and across digital platforms for three months. EJ also minored in Italian Studies and studied abroad in Florence, Italy. While attending college, EJ also maintained her production role in Beaumont, worked another job in her hometown, was a Daily Cougar copy editor for the campus's newspaper and as a barista at a Houston coffee shop. She graduated Magna Cum Laude from the University of Houston with a Bachelor's of Arts degree in just three years. Go Coogs!

With a passion for film, EJ found herself developing a love for news. After graduating from college, she then pursued a job in the industry where she started as an Associate Producer at KBMT/KJAC in Beaumont. After three months, she became a full-time news producer for 12News Daybreak and then was the acting Executive Producer soon after. During her time at 12News, EJ was a part of special newscasts for Elections 2016, campaign visits for the Presidential election, and a severe dam flooding that shut down I-10 into Louisiana.

After two years in Beaumont, EJ then took a job in Tucson as the EP of Good Morning Tucson and the Morning Break at KGUN9. She oversees the morning show, while also contributing to the digital content.