Embattled Arizona Wildcats coach Sean Miller announced he will remain as coach of the team.

Miller made the announcement at a mid-day press Thursday at McKale Center. 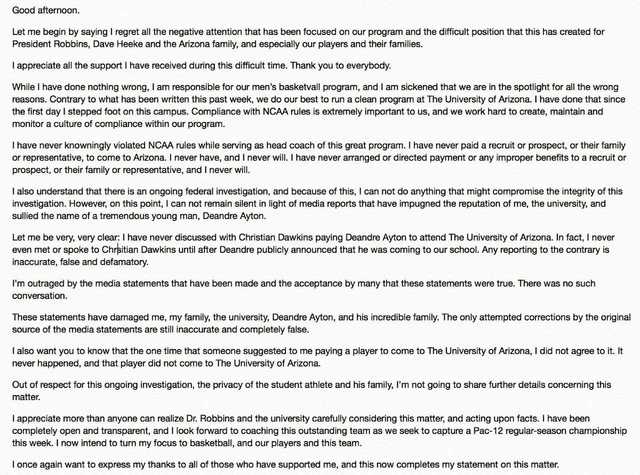 He denied paying any player, family or representative in the recruiting process.

Sean Miller to remain men’s basketball head coach at U of A, maintains he never spoke with Christian Dawkins about paying DeAndre Ayton @kgun9 pic.twitter.com/nlsO1BwQgN

“I look forward to coaching this outstanding team...I now intend to turn my focus to basketball, our players, and this team.” @kgun9 #SeanMiller pic.twitter.com/zPCHmEBEtj

On Friday, ESPN reported that an FBI wiretap recorded Miller discussing paying then-recruit DeAndre Ayton $100,000 to play at the UA with Christian Dawkins.

Since then, the sourcing of the article has been called into question and an attorney representing Ayton's family has denied receiving payment. On Thursday, Miller said he never spoke to Dawkins before Ayton committed to the UA.

Miller and the UA mutually agreed that he sit out Saturday's game at Oregon. Miller released a statement declaring that he would be exonerated of wrongdoing.

Assistant coach Lorenzo Romar has been running the team in Miller's absence. The Wildcats host Stanford at 8 p.m. Thursday.