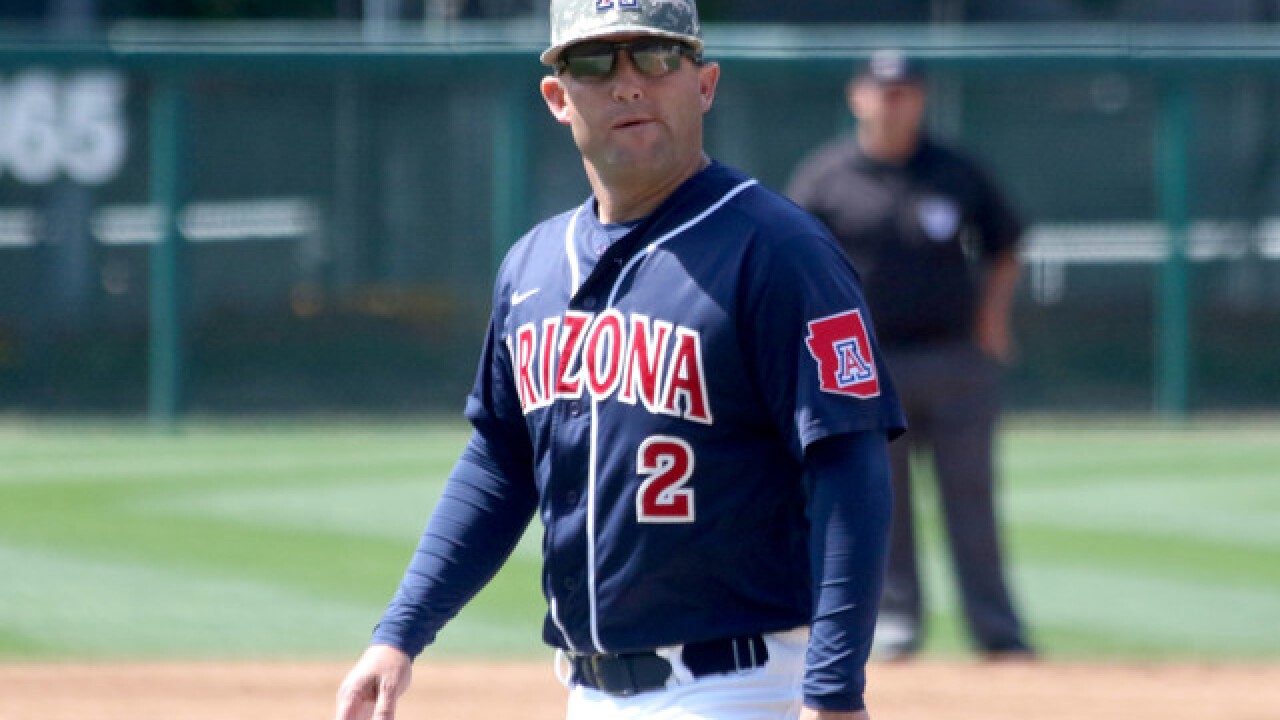 By: Jason Barr
Posted at 2:26 PM, Aug 15, 2017
Arizona head baseball coach Jay Johnson has agreed to a contract extension through the 2022 season.
"Jay Johnson has done a tremendous job as our head baseball coach and we are committed to having him in Tucson for a long time," Arizona athletic director Dave Heeke said. "Jay's combination of program vision, preparation, leadership, in-game coaching and ability to recruit have made him one of the most sought-after coaches in college baseball, and we're ecstatic he'll remain a Wildcat. It's important that we continue to invest in our baseball program from on-going improvements at Hi Corbett Field to competitive coaches' salaries, and retaining Jay Johnson is a great way to start."
The deal will increase Johnson's yearly base salary to $500,000. In addition to the base salary, Johnson's five-year extension includes performance bonuses and 50,000 units in a master limited partnership that will fully vest at the completion of the contract. The extension has been agreed to in principle but is subject to final approval by the Arizona Board of Regents.
In two seasons at Arizona, Johnson has compiled an 87-45 record and became the first coach in school history to lead his team to the NCAA Tournament in each of his first two seasons as head coach.
In 2016, Johnson led the Wildcats to the College World Series Finals, making him one of just five coaches in college baseball history to accomplish the feat in their first year at a school. Overall, he guided the Wildcats to a 49-24 record. The Cats captured the Lafayette Regional Championship and the Starkville Super Regional title en route to their 17th College World Series in program history. Last season, Johnson led Arizona to a 38-21 record and a spot in the Lubbock Regional. The Wildcats were ranked inside the Top 25 all season.
"I am honored to be the coach at Arizona because this is a special place," stated Johnson. "I'm thankful that President Robbins, our AD Dave Heeke and our University community have the trust in me to lead this program. Their support, along with the wonderful support of our fans, will help us continue to make Arizona baseball something the Wildcat family can be proud of."
While at Arizona, Johnson has coached 12 Major League Baseball draftees and seven All-Americans. He has also mentored 10 All-Pac-12 selections in two seasons.
Tucson fans have responded to Johnson and the Wildcats' success. Arizona has led the Pac-12 and all West-Coast schools in attendance each of the last two years. Last season, Arizona ranked 16th nationally, averaging 3,351 fans per game. In 2016, the Wildcats drew an average of 3,043 fans, and ranked 19th nationally.
In conjunction with the success on the field, Johnson and the baseball program continue to see improvements to their home, Hi Corbett Field. Construction is currently underway on the Terry Francona Hitting Facility, which will be located beyond the right field wall and is scheduled to be completed this fall. The home clubhouse is also being fully renovated and is scheduled to be completed by Labor Day. These projects come on the heels of recent upgrades including a new videoboard, seating replacements, a new backstop, and a new in-stadium speaker system.
Copyright 2017 Scripps Media, Inc. All rights reserved. This material may not be published, broadcast, rewritten, or redistributed.