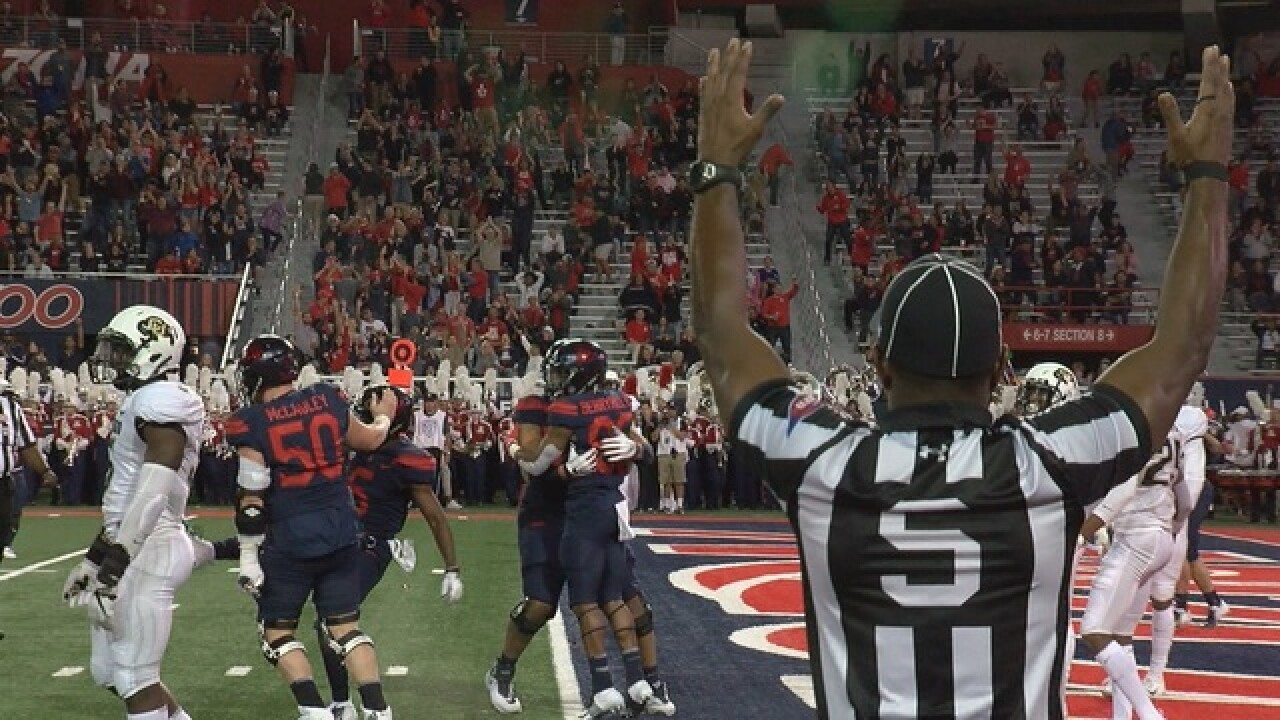 Khalil Tate threw for career-high 350 yards and five touchdowns after setting an FBS rushing record against Colorado a year ago, lifting Arizona to a 42-34 victory over the Buffaloes Friday night.

Arizona's junior quarterback ran all over Colorado a year ago, setting an FBS record for a quarterback with 327 yards rushing. He beat the Buffaloes with his arm this time, completing 17 of 22 passes, including a pair of touchdowns to Shawn Poindexter.

J.J. Taylor provided balance to the Wildcats' offense, running for 192 yards on 40 carries to send Colorado (5-4, 2-4) to its fourth straight loss.

Steven Montez threw for 343 yards and three touchdowns, but had a late interception for the Buffaloes.

Arizona's offense stagnated early and Taylor lost a fumble at the Wildcats' 7-yard line, setting up a field goal. Arizona also had a pair of miscues on special teams and K.D. Nixon scored on an 8-yard run to put Colorado up 10-0 after one quarter.

Once Tate got the Wildcats going, Colorado had a hard time stopping him.

He hit Stanley Berryhill III on a 40-yard touchdown pass, tossed a 1-yarder to Poindexter and 12 yards to Shun Brown for another score.

Two defensive breakdowns allowed Colorado to stay in it.

The first came when Montez caught Arizona on a blitz and found Kyle Evans on a 17-yard touchdown pass. Then Wildcats safety Jarrius Wallace missed on an interception attempt, clearing the way for Travon McMillian's 57-yard touchdown.

Lucas Havrisik hit a 55-yard field goal on the final play of the first half to put Arizona up 26-24.

Tate kept firing in the second half, hitting Poindexter on a 39-yard touchdown in the third, and Cedric Peterson on a 57-yard score in the fourth to put the Wildcats up 42-34.

Montez found Tony Brown on a 20-yard TD pass in the third, but threw an interception in the end zone with five minutes left.

Once considered a front-runner in the Pac-12 South, Colorado now must win one of its final three games just to become bowl eligible.

Arizona is clicking on offense at just the right time, moving within a game of becoming bowl eligible in its first season under coach Kevin Sumlin.

Colorado plays at No. 10 Washington State next Saturday.

Arizona has a bye before facing the Cougars on Nov. 17.