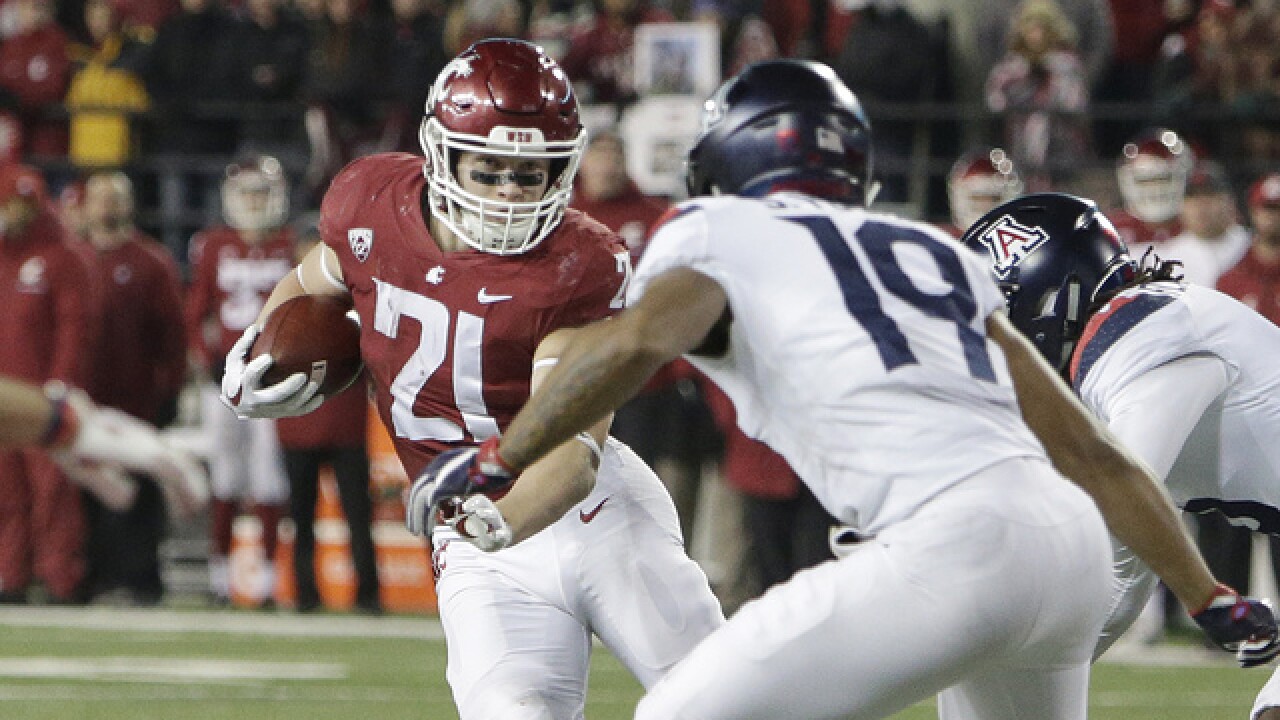 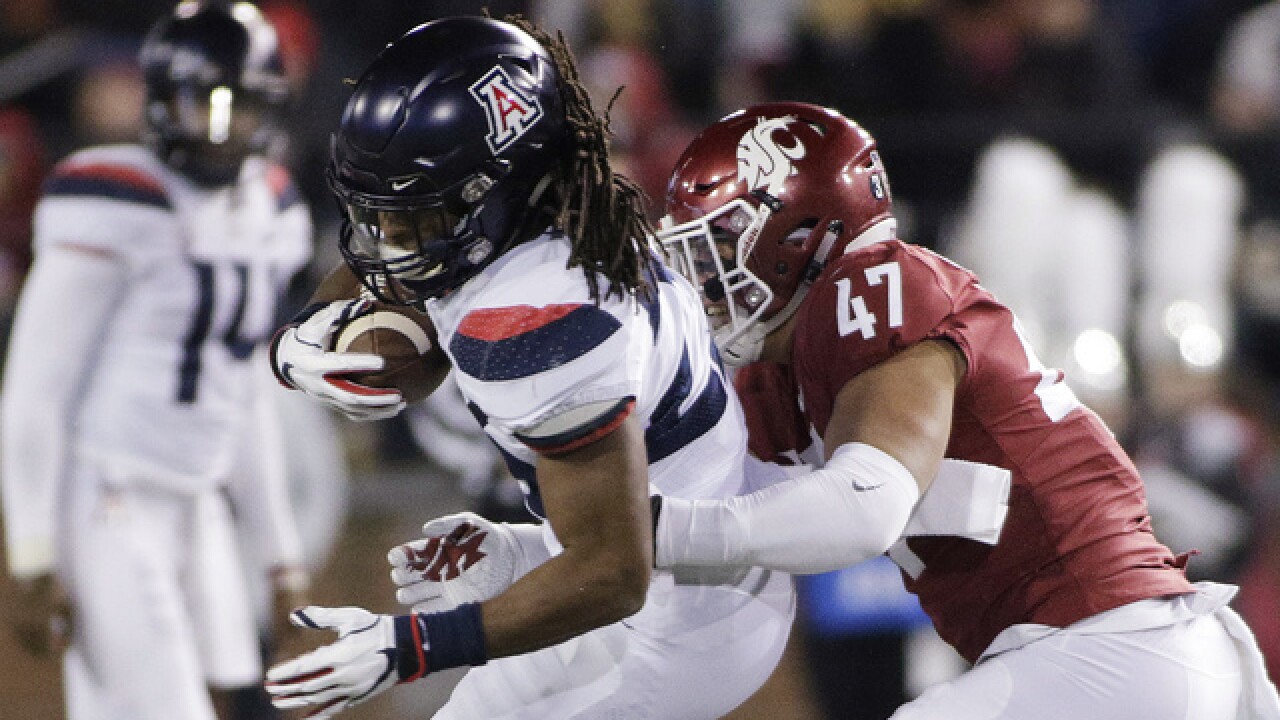 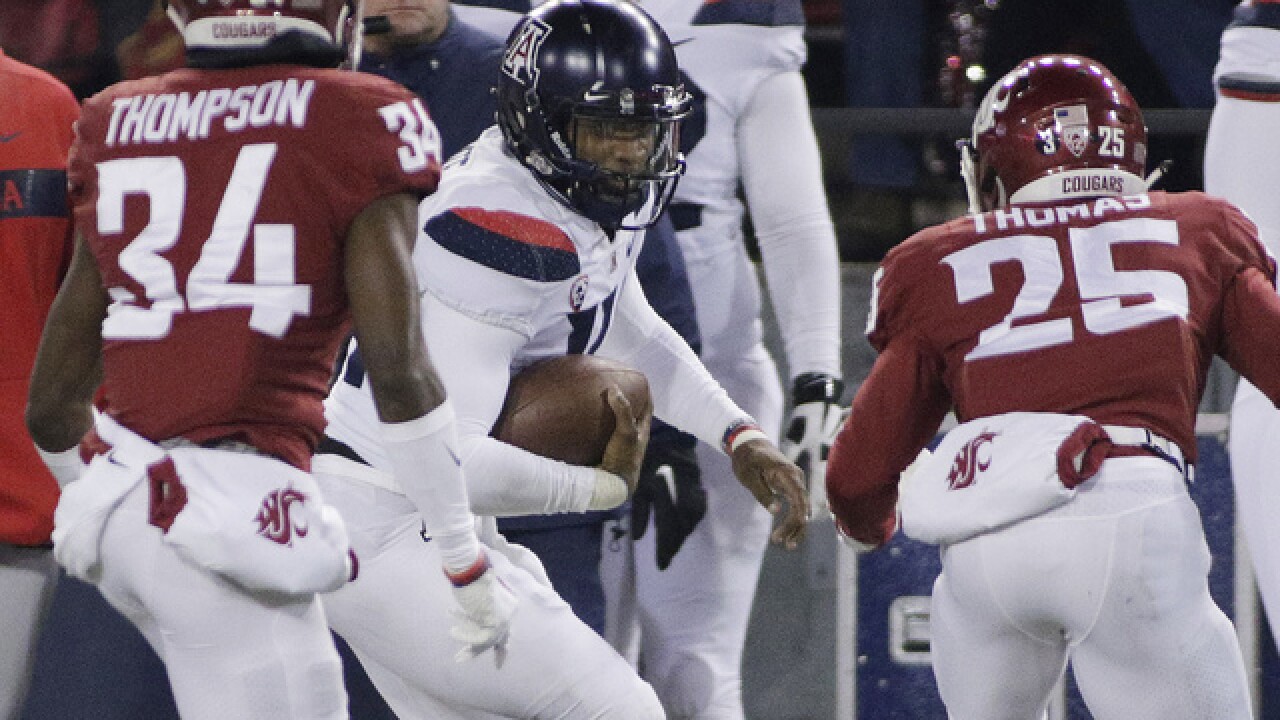 This record-setting season just keeps getting better for Gardner Minshew.

Washington State’s star quarterback broke a school mark with seven touchdown passes and the No. 8 Cougars routed Arizona 69-28 on Saturday night to boost their longshot bid for a spot in the College Football Playoff.

“In high school I got six one time,” Minshew said. “I never done seven. It was pretty crazy tonight.”

Washington State (10-1, 7-1 Pac-12, No. 8 CFP) raced out to a 55-14 lead at halftime and was not seriously threatened on the way to its seventh consecutive victory. The Cougars host archrival No. 17 Washington next Friday, with the Apple Cup winner taking the Pac-12 North title.

With their 10th win of the season, the Cougars matched a program record last accomplished in 2003. They also won their 13th straight home game and set a season high for points.

Minshew, being pushed by WSU as a Heisman Trophy candidate, completed 43 of 55 passes for 473 yards and was not intercepted.

“The offensive line worked their tail off tonight,” he said.

Running back James Williams, who scored two touchdowns, said the lopsided win was better than a recent run of close games.

“The last three or four games about gave me a heart attack,” he said. “I’d rather just blow a team out.”

This is Leach’s first 10-win season at Washington State.

“We’re excited about it for a night,” Leach said. “Tomorrow we start preparing for the next one.”

Arizona was hurt by six penalties and three turnovers in the first half, helping Washington State put the game away early.

“You can’t put the ball on the ground six times,” coach Kevin Sumlin said. “We had a pick early in the game and turnovers and fumbles against a team that scores them kind of points, it just can’t happen.”

Washington State scored on its first possession, with Williams rushing over from the 1.

On the next series, Tate was intercepted by Marcus Strong. Aided by two consecutive facemask penalties against the Wildcats, Washington State advanced to the 1-yard line. Max Borghi ran in for the touchdown.

Minshew replied with touchdown passes to Calvin Jackson Jr. and Dezmon Patmon for a 28-7 lead.

Minshew hit Jackson for a 6-yard touchdown pass, but the kick failed and Washington State led 34-14.

Arizona fumbled the ensuing kickoff and the ball was booted into the end zone, where Kainoa Wilson fell on it for a 41-14 Washington State lead.

Minshew added touchdown passes to Williams and Tay Martin for a 55-14 lead at halftime.

Tate threw a pair of touchdown passes in the third quarter and Minshew tossed a couple in the fourth.

The blowout win should only bolster the Cougars in the Top 25 and CFP rankings.

Arizona: The Wildcats lead the Pac-12 with an average of 206 yards rushing per game, but couldn’t get much going against a stout WSU defense. They need a win next weekend to become bowl eligible.

Washington State: The balanced Cougars own the nation’s best passing attack (392 yards per game) and rank 20th in defense. They need two victories to win the Pac-12 and have a chance at a CFP berth.

Washington State faces No. 17 Washington next Friday, with a trip to the Pac-12 championship game on the line.