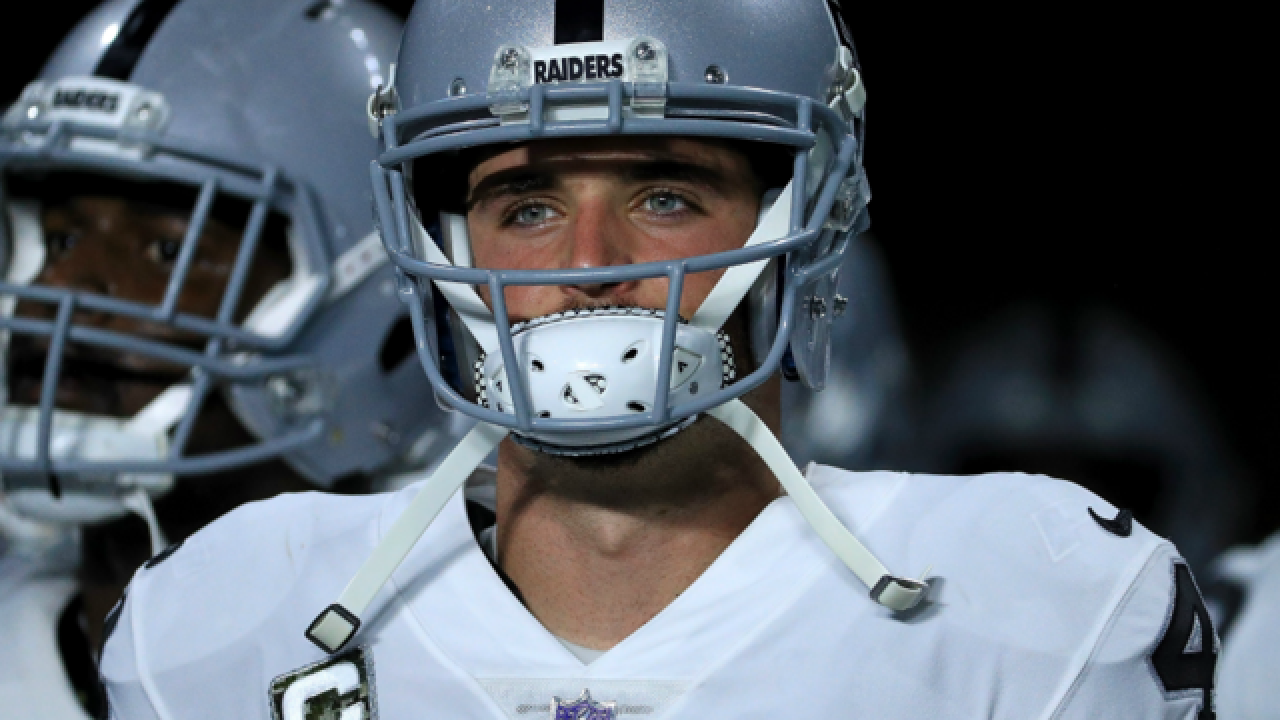 Copyright 2017 Scripps Media, Inc. All rights reserved. This material may not be published, broadcast, rewritten, or redistributed.
<p>Derek Carr #4 of the Oakland Raiders of the Oakland Raiders looks on during a game against the Miami Dolphins at Hard Rock Stadium on November 5, 2017 in Miami Gardens, Florida. (Getty Images)</p>

Daniel Carlson kicked a 35-yard field goal as the game ended to give Oakland a 23-21 victory over the Arizona Cardinals on Sunday in a matchup of teams scraping the bottom of the NFL standings.

The Raiders (2-8), who had lost five straight, matched the record of the Cardinals.

Derek Carr threw for two touchdowns and had completions of 32 and 20 yards on the final drive that led to Carlson's winning kick. Carlson also had field goals of 49 and 21 yards in the second half.

Arizona rookie Josh Rosen threw for three touchdowns, two to Larry Fitzgerald, but was intercepted twice. Both picks led to first-half touchdowns for Oakland. David Johnson rushed for a season-best 137 yards, including a 53-yarder that set up Rosen's 5-yard TD pass to Fitzgerald that gave the Cardinals a 21-20 lead with 5:02 to play.

Later, Johnson had a 57-yard touchdown run called back by a holding penalty and also had a key drop. That possession also featured an unnecessary roughness penalty on tight end Jermaine Gresham that helped force the punt to Oakland.

Rosen was 9 of 20 for 136 yards, but three of the completions went for scores: 18 and 5 yards to Fitzgerald and a 59-yard pass play to fellow rookie Christian Kirk. Fitzgerald has 114 career TD catches, seventh most in NFL history.

The day started badly for the Cardinals and ended that way.

On Arizona's second play, Gareon Conley made a diving interception and returned it 28 yards to the Cardinals 33-yard line. Three plays later, Carr threw to wide-open Jared Cook for the touchdown.

Arizona took the subsequent kickoff and tied it with a nine-play, 64-yard drive. Rosen threw 18 yards to Fitzgerald for the touchdown.

The Cardinals took the lead when Rosen, changing the play at the line of scrimmage, threw short to Kirk. Kirk, on his 22nd birthday, shook loose from a would-be tackler and raced to the end zone, a 59-yard play to make it 14-7 late in the first quarter.

Karl Joseph intercepted a deflected pass at the 50 and Oakland drove from there for the tying score. Carr threw 5 yards to Brandon LaFell for the touchdown.

Oakland drew a 5-yard penalty for calling consecutive timeouts in the second quarter. It moved what would have been a third-and-2 situation to third-and-7 and the Raiders failed to convert. Coach Jon Gruden was demonstrably upset with Carr afterward on the sideline.

Raiders: LaFell left in the second half with an Achilles tendon injury. Cornerback Leon Hall hurt his back in the first half.

Cardinals: Linebacker Deone Bucannon left with a chest injury in the second half.

Raiders: at Baltimore next Sunday.

Cardinals: at the Los Angeles Chargers next Sunday.