Arizona to meet Purdue in the Foster Farms Bowl 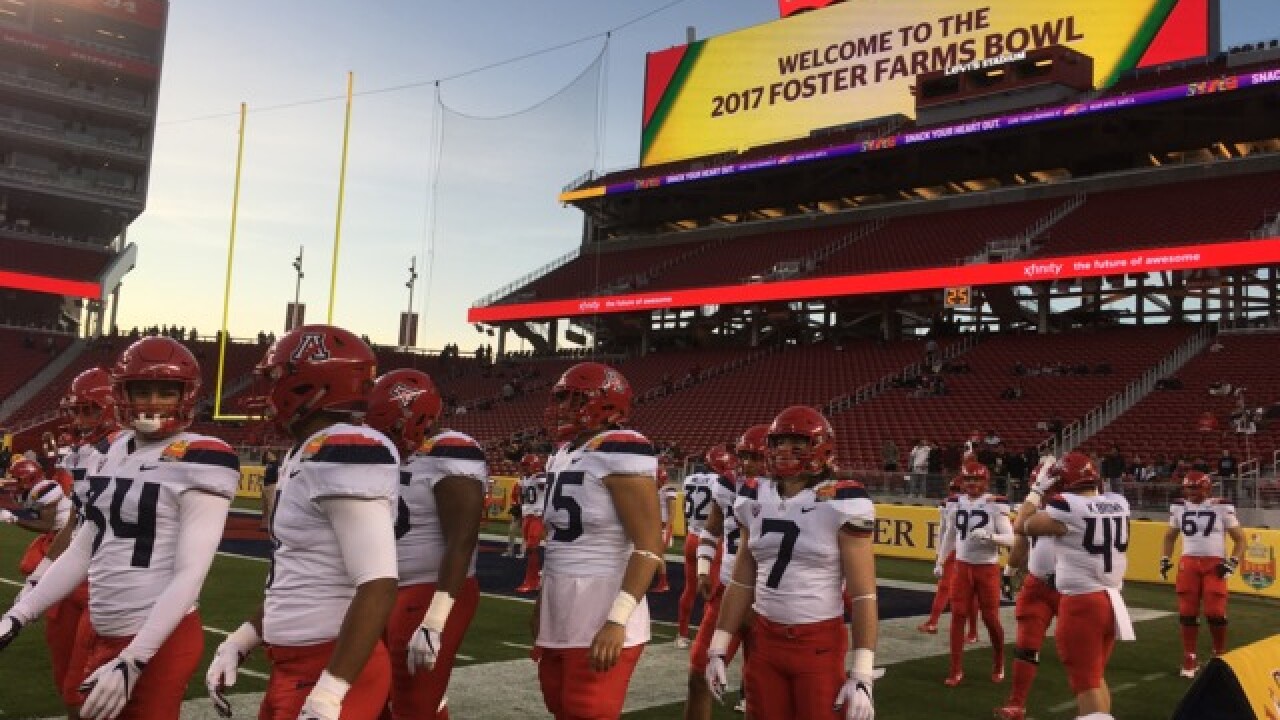 Purdue's first bowl win in six years would give the Boilermakers a winning record and a perfect capper to coach Jeff Brohm's first season.

Brohm helped engineer an impressive turnaround at Purdue, taking a team that won just nine games combined in the previous four seasons all the way to the Foster Farms Bowl on Wednesday night against Arizona.

A win by the Boilermakers (6-6) over the Wildcats (7-5) would give Purdue a winning record for the first time since 2011 and its first bowl victory over a major conference team since beating Washington in the 2002 Sun Bowl.

"It would be huge for our program and our guys," Brohm said. "We made some progress this year. It's meant a lot to them. It's been a while since we've been in this environment. To be able to extend the season was huge for us."

Brohm didn't know quite what to expect from his team as it struggled in summer practices, but he was encouraged after the team proved to be competitive in a season-opening loss to Louisville. The Boilermakers then bounced back from three straight losses by eight or fewer points midway through the season to close strong with three wins in four games.

The highlight of that stretch was a 24-15 win at then-No. 25 Iowa that set the stage for Purdue to become bowl eligible by beating rival Indiana in the regular-season finale.

Purdue will get another tough test in the bowl game against dynamic quarterback Khalil Tate and the Wildcats. Tate rushed for 1,353 yards and 12 touchdowns and passed for 1,289 yards and nine TDs after taking over the team early in the fifth game of the season, which was against Colorado.

"He can make all the throws," coach Rich Rodriguez said. "He's a dynamic runner and he's a big strong guy. He has as good a throwing motion, arm and touch as any quarterback I've had. But we can do more with our offense."

Here are some other things to watch:

GOOD TEST: The Boilermakers got a good warmup for what they will see in Tate when they played 2016 Heisman Trophy winner Lamar Jackson in the opener. They weren't able to slow Jackson down much. He ran for 107 yards and threw for 378 more and two TDs to rally Louisville from a third-quarter deficit to a 35-28 win. Brohm said it could be a big help having faced a playmaker like Jackson, although he did give a caution.

"The only part that's discouraging is we worked all spring, all summer and all fall camp to beat Lamar Jackson and that first game he almost single-handedly beat us so it didn't work," Brohm said. "I think we can learn from it."

STOUT D: Purdue's strength defensively is on run defense, where the Boilermakers allowed just 3.6 yards per carry this season. Purdue held four of its final five opponents to under 100 yards with play that caught the attention of Rodriguez.

HOMECOMING: Brohm will have good memories in his return to the Bay Area. He spent three seasons as a backup for the San Francisco 49ers in the 1990s and had one memorable performance in 1996 when he took over early in a game at Houston when Steve Young got hurt. Brohm threw for 176 yards, including a go-ahead 20-yard TD pass to Terrell Owens in the fourth quarter to give San Francisco the win.

"It was a great accomplishment," he said. "It was something that made you feel like you did something good for the team. That earned respect from my teammates and helped my career extend quite a bit just from that one game."