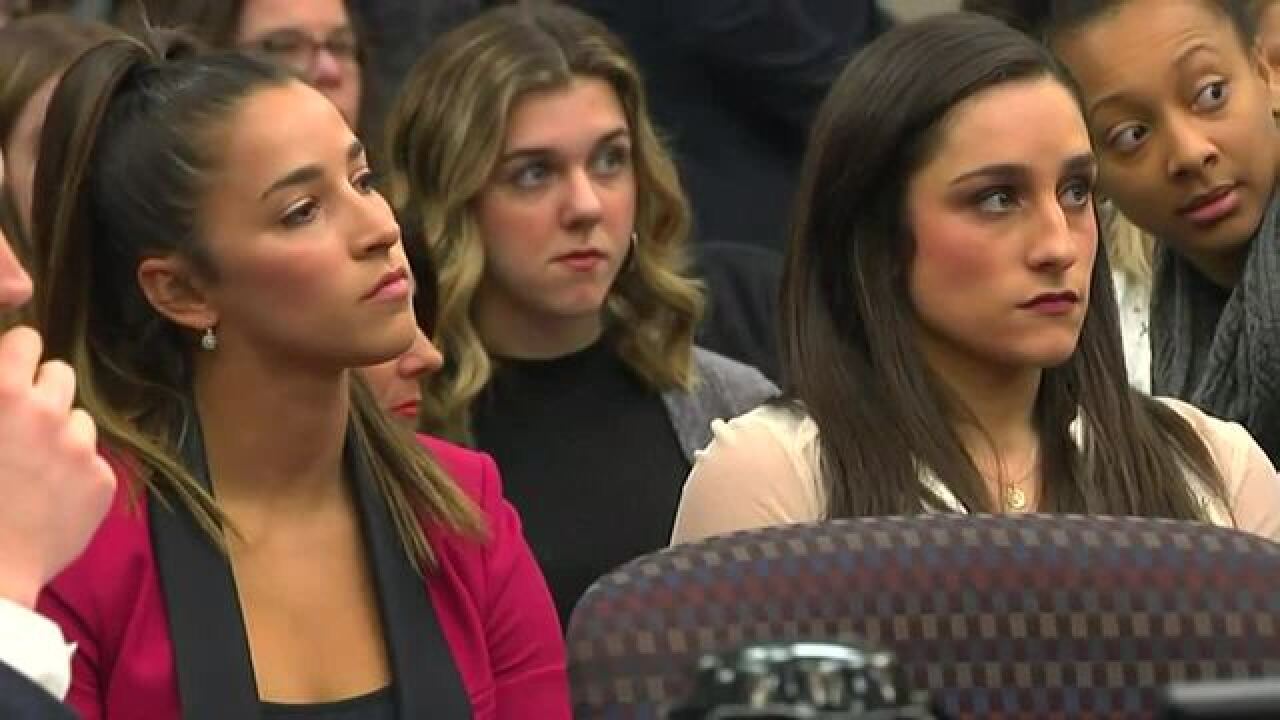 "The tables have turned Larry," she said. "We are here. We have our voices, and we are not going anywhere."

Raisman also accused USA Gymnastics of "rotting from the inside" and called on its new leader, Kerry Perry, to take responsibility and stop issuing statements full of empty promises.

"Where is the honesty? Where is the transparency? Why must the manipulation continue?" she asked.

The gymnast's statement came on the fourth day of a remarkable weeklong sentencing for Nassar , the former doctor for USA Gymnastics and Michigan State University. He has pleaded guilty to seven counts of criminal sexual conduct in Ingham County, Michigan, and admitted to sexually assaulting and abusing young girls under the guise of providing medical treatment.

Raisman, who won three gold medals for the US women's gymnastics team in 2012 and 2016, said Friday that she represented USA Gymnastics and the US Olympic Committee at two Olympics, but they had not reciprocated.

"They have been quick to capitalize on my success," she said. "But did they reach out when I came forward? No."

Raisman had said on Twitter last week she did not plan to attend Nassar's sentencing, but she said she decided to do so after watching the proceedings from afar.

Earlier Friday in court, Olympic gymnast Jordyn Wieber said she, too, was sexually abused by Nassar during her time at USA Gymnastics.

"I thought that training for the Olympics would be the hardest thing that I would ever have to do, but in fact, the hardest thing I've ever had to do is process that I'm a victim of Larry Nassar," Wieber said.

Wieber's statement made her the fourth member of the 2012 women's gymnastics team, known as the "Fierce Five," to say Nassar abused them. A written statement from McKayla Maroney was read into court Thursday, and Gabby Douglas has also said publicly the former team doctor abused her.

"But even though I'm a victim, I do not and will not live my life as one," Wieber said. "I'm an Olympian. Despite being abused, I worked so hard and managed to achieve my goal."

As of Friday morning, more than 70 victims have stared down Nassar and spoken out about how he affected their lives in defiant, tear-filled statements. In all, 120 women are expected to speak about Nassar's abuse, according to prosecutors. The statements could last into Tuesday, Judge Rosemarie Aquilina said.

Nassar has also pleaded guilty to three charges in Eaton County, Michigan, and he has already been sentenced to 60 years in prison for federal child pornography charges.

Tales of abuse and anxiety

Many of the victims -- or survivors, as they have also been called in court -- have reserved harsh words for Nassar, who they said used his power and professional renown in the sports community for his own sexual gratification.

But they have also targeted institutions that they say enabled Nassar for more than two decades. USA Gymnastics and Michigan State have separately said they reported Nassar's abuse immediately when they learned about it, but a number of victims said they told authorities about the abuse years ago and were ignored.

"Michigan State University, the school I loved and trusted, had the audacity to tell me that I did not understand the difference between sexual assault and a medical procedure," Amanda Thomashow said at sentencing.

"That master manipulator took advantage of his title, he abused me, and when I found the strength to talk about what had happened, I was ignored and my voice was silenced."

That criticism has not gone unheard.

And on Friday, Michigan State's Board of Trustees asked the Michigan attorney general to review the Nassar case, according to a statement CNN obtained.

"The testimony of Nassar's victims this week made many of us, including me, listen to the survivors and the community in a different way," said university President Lou Anna K. Simon, who attended court Wednesday. "It is clear to the board and me that a review by the attorney general's office can provide the answers people need."

Michigan Attorney General Bill Schuette agreed to take on a "review, report and recommendation" of what happened at the university, he said in a statement.

John Manly, an attorney representing more than 100 women in civil lawsuits, said the move was "too little, too late."

"The only reason Ms. Simon asked for (an investigation) today is because MSU's culpability has been exposed," he said.