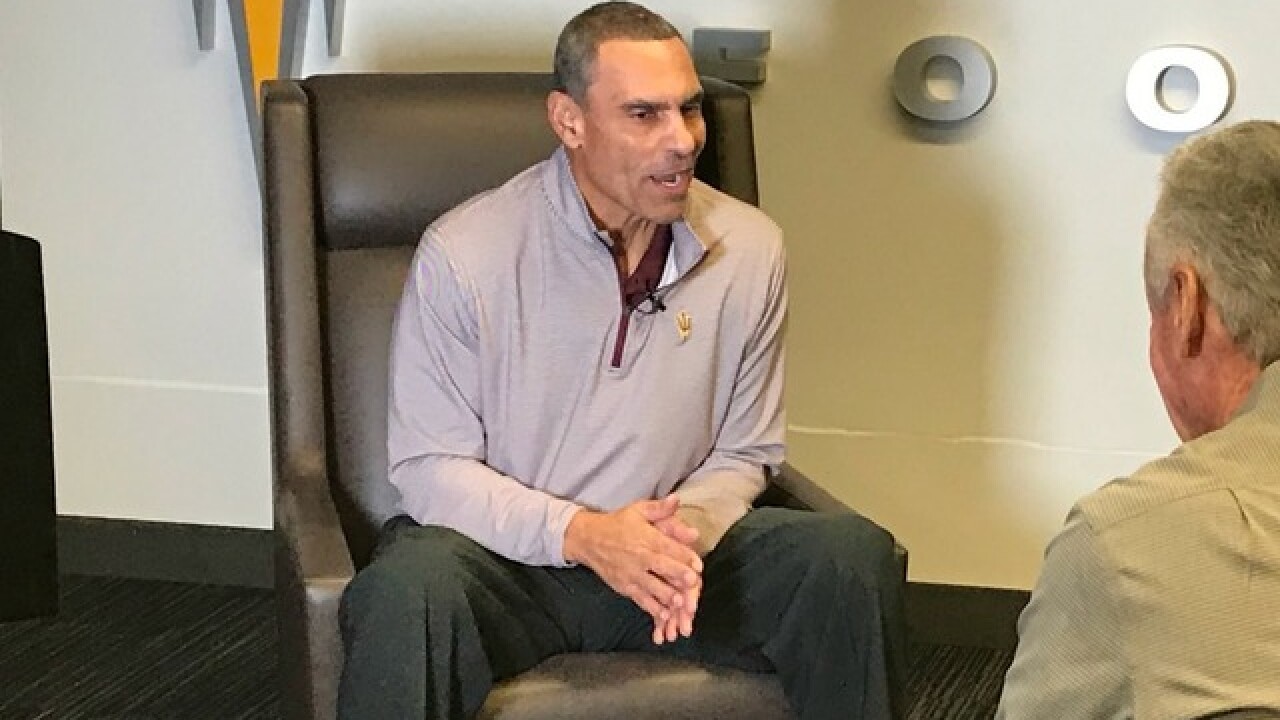 During his introductory press conference as ASU's new head football coach, Herm Edwards was asked what he knows about the Territorial Cup rivalry.

Edwards said he understands it well thanks to an unlikely source -- former Arizona Wildcats great Tedy Bruschi, whom he worked with for several years at ESPN.

On Saturday, Edwards reiterated his understanding of the rivalry and the importance of keeping the Territorial Cup in the Valley following the Devils' 42-30 win over UA in November.

"It’s big. It’s all I hear about, the rivalry," Edwards told ABC15's Craig Fouhy. "We’ve been fortunate to win a lot of those as of late. It’ll be interesting."

Edwards knows all about college rivalry games. He played collegiately for the Cal Golden Bears, who compete against Stanford in the "Big Game" every year. And he learned about the Territorial Cup rivalry at ESPN from Bruschi and ASU alum Darren Woodson.

But the Wildcats have a new head coach of their own: former Texas A&M coach Kevin Sumlin, who was introduced in Tucson last week. Like most national analysts, Edwards praised the Sumlin hire -- and he confirmed something Sumlin mentioned during his introductory press conference: That he had recently brought Edwards to Texas A&M to give his team a pep talk.

"Obviously I know Kevin. I spoke to his team last year," Edwards said. "We know that those guys will be coached very well by Kevin. He’s a good recruiter. He’s going to bring in some guys he knows that can recruit players. That’s what it’s about right now.

UA irked some Sun Devil fans last week by displaying Sumlin ads on 20 electronic billboards around the Valley. But Edwards isn't bothered by it, and he'd rather have fans' attention focused elsewhere.

Kevin Sumlin billboard off the 202 near Sun Devil Stadium. pic.twitter.com/rbYrwk3B9t

"Good for him. He deserves it," Edwards said. "I’m good. I don’t want any billboards. It’s all about Sun Devil football. It’s not about the head coach; it’s about the players. That’s all that matters."

With the addition of Sumlin and new UCLA coach Chip Kelly to the Pac-12 ranks, Edwards said he's got his work cut out for him at ASU. But he's looking forward to the challenge and is excited about the Pac-12's profile being raised on a national level thanks to those hires.

"All of a sudden all these coaches in this conference are pretty good," he said. "I think this Pac-12 thing is starting to bloom, starting to blossom. I think people are starting to recognize it obviously, and that’s a good thing."