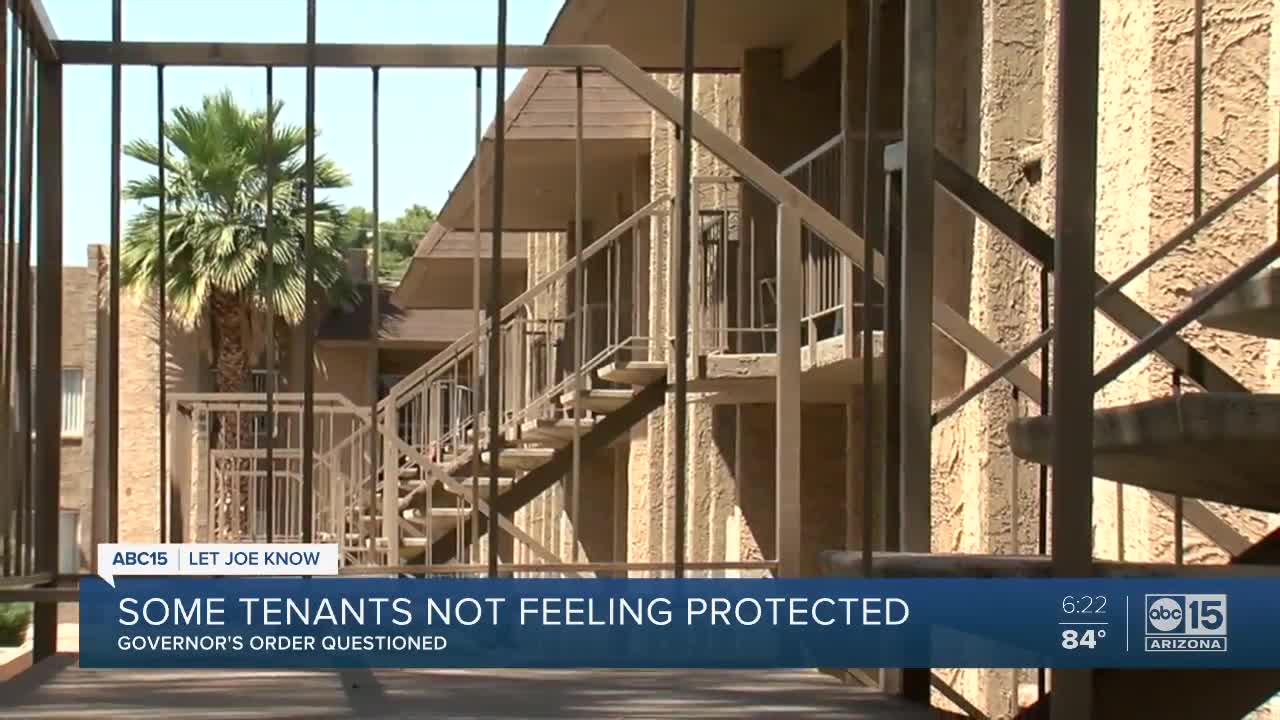 Governor Ducey's executive order says you can't be kicked out, if you qualify. And that's a good thing for many renter's who've lost jobs or had hours cut.

If you can't pay rent because of coronavirus health or financial concerns, you have protection.

Governor Ducey's executive order says you can't be kicked out, if you qualify. And that's a good thing for many renter's who've lost jobs or had hours cut.

But there's some confusion over how you qualify, and who makes that decision. It's leaving some families at the mercy of their landlords.

We were with Tanisha Bell and her family at the Glendale apartment complex. On that day, a county constable was supposed to come back and remove them.

"I'm pretty much just waiting to be kicked out," Tanisha told me.

When she says she couldn't pay her March rent in full, and got behind on here April payment, Tanisha says the complex added nearly $400 in late fees and eviction court costs.

That happened despite an order by Governor Ducey's office protecting renters.

Last month, the governor announced a 120-day executive order keeping tenants in their rentals if they can't pay rent due to health or financial reasons tied to COVID-19.

But attorney Pam Bridge says the order's wording is putting some tenants at risk.

Bridge is an attorney with the non-profit Community Legal Services.

She points to a vague but critical part of the order that says tenants must "notify the landlord in writing with any available documentation."

Bridge says there is confusion over what is "available documentation" and some tenants won't know what's expected.

We took that to Governor Ducey's office. We asked the governor for clarification. We didn't get an answer.

Tanisha says when her disabled son moved out, her caregiver role ended and because of COVID-19, so did her part time work.

She says her hours were cut at a store.

And she says because of COVID-19, a part-time arena job was canceling concerts and graduations so she couldn't get that work.

Tanisha says it's just part of the proof of financial hardship she sent to management concerning reasons she couldn't pay on time.

We don't know what the complex finally needed since they didn't return our calls.

So we advised Tanisha to send another letter, explaining everything she says she explained before in detail.

Tanisha says her paperwork proof that she had notified the landlord of her issues was enough to keep her there for that day.

And she says everything the constable told her needed to be done, she had already done.

Bridge says while executive orders can also be too specific, that's not the case here. She sees another troubling issue with this one, no direction over who decides if the tenant qualifies for the protection?

Bridge says "it can't be the landlord because that kind of defeats the whole purpose."

She says some landlords could use it as an excuse to remove a tenant even if they did fall under the protective order.

Constables tell me their job is to carry out an order.

They say disagreements about payments, timing and financial loss is between the landlord, tenant and ultimately the courts.

None of that is spelled out in the order.

We asked Governor Ducey's office why there isn't more clarification a month after issuing the order.

Again, we didn't get an answer to our questions.

And again, we received no response from management at the Palms of Glendale, where the family waits, and wonders, what could happen any day.

It's something Tanisha says would put them on the streets with no place to go.

So far, the constable has not been back. But today, Tanisha did get a letter from her complex management.

It says in part that they have given her extra time to come up with "proper documentation."

And they've asked when she will pay March and April rent or when will she "surrender" the apartment.

Tanisha knows she has to pay the rent eventually. She says she just needs more time to get back on her feet. And she plans to start a job this week that should continue despite Covid-19.

We're staying in contact with Tanisha in hopes she's allowed to stay for the length of the protective order.

And we're continuing to ask the Governor's office for clarification about what appear to be some vague language in the executive order that is designed to protect Tanisha and you.