Martial arts business fights to survive; needs another round of financial help 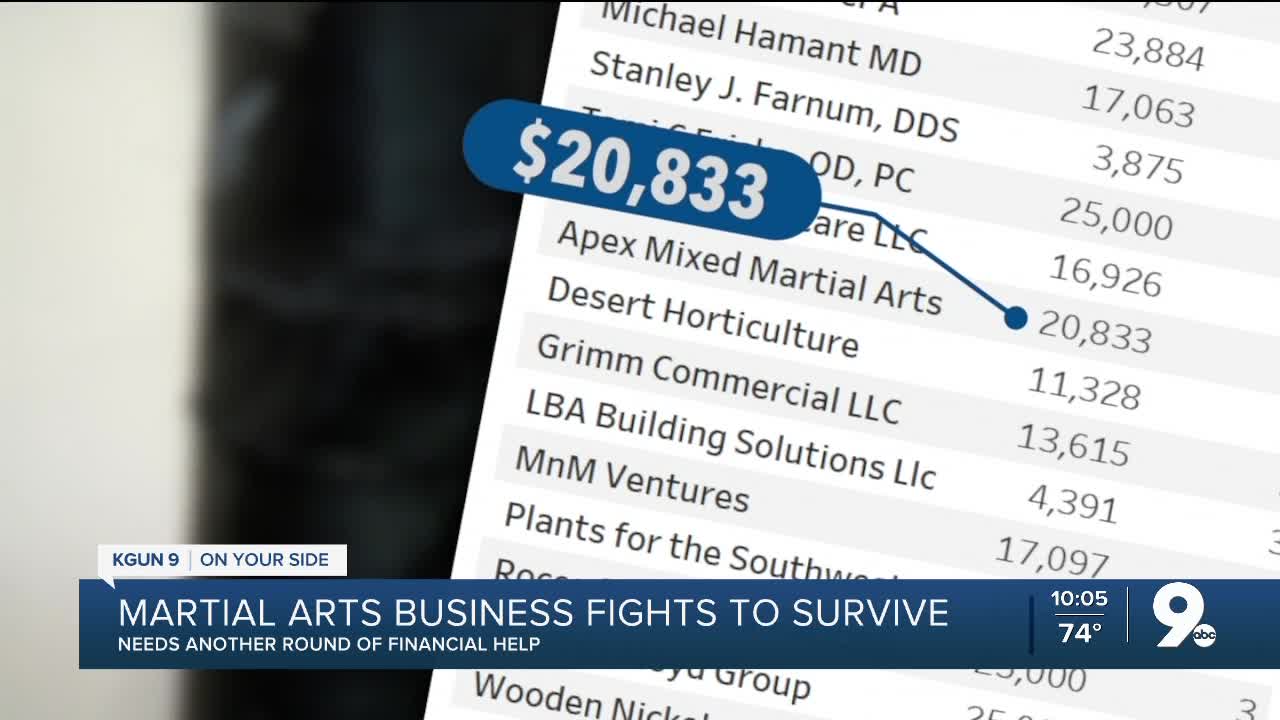 TUCSON, Ariz. — A martial arts facility has been fighting its way through the pandemic with help from the city of Tucson.

It's one of the non-essential businesses that had to shutdown back in March and again at the end of June.

The couple said they felt relieved when the doors had opened again because it's their only means of income.

Both took a huge financial hit during the first shutdown.

Business, primarily memberships, dropped nearly in half when they closed the first time.

"They want to go into our boxing ring and our cage and our mats and hit our bags and so you know we obviously had some losses," Owner Nicole Rivera said.

That loss of income meant the Rivera's could only keep a few instructors.

"Before that we had a good handful," Rivera said. "Maybe 10 different people teaching classes."

After brainstorming for two weeks, the Riveras decided to enter a different ring — a virtual one — to survive.

Not knowing when the shutdown would end, Nicole reached out to the city after getting nowhere with the federal PPP loans on her own.

Staff told her about the Tucson Resiliency Fund.

APEX Mixed Martial Arts is one of the businesses that received the first round of the $1,000,000 in zero interest loans.

Nicole says the process took about a week.

"So when I emailed him to check up on the status of the loan, I didn't realize that the money had already transferred into my account," Rivera said. "So it was definitely enough to carry us through."

Nicole says keeping up with the facility's rent and paying staff has been the priority.

"Getting our head above water a little bit so we can start rebuilding everything," Rivera said.

But the Riveras are back to sweating it out. Their facility doors are suddenly shut, once again, for at least a month after the recent surge in COVID-19 cases.

"We were starting to see a comeback and this really is disappointing to see," Rivera said. "We can't continue to try to recover."

The Riveras have now added outdoor classes to the mix to help maintain their membership counts.

That is allowed under the Governor's order but the Riveras say it's not nearly enough to keep their business afloat.

"It's a real reality if they close our business for half a year we would definitely need some help in some way," Rivera said.

An extension to the Paycheck Protection Program to August 8th is sitting on President Trump's desk, but as it stands now, no business can reapply.

Florida Senator Marco Rubio tweeted "the vast majority of Small business that wanted to benefit from the program have already used it. What we really need to pass very soon is targeted help for those who need a second round of aid."

KGUN 9 reached out the City of Tucson to find out whether the Riveras can reapply for the Resiliency Funds.

They responded: "It's currently not clearly addressed in the Mayor and Council approved criteria, so we we will address it and provide clarity."

The Riveras say they'll continue to fight as hard as they can to save their business.