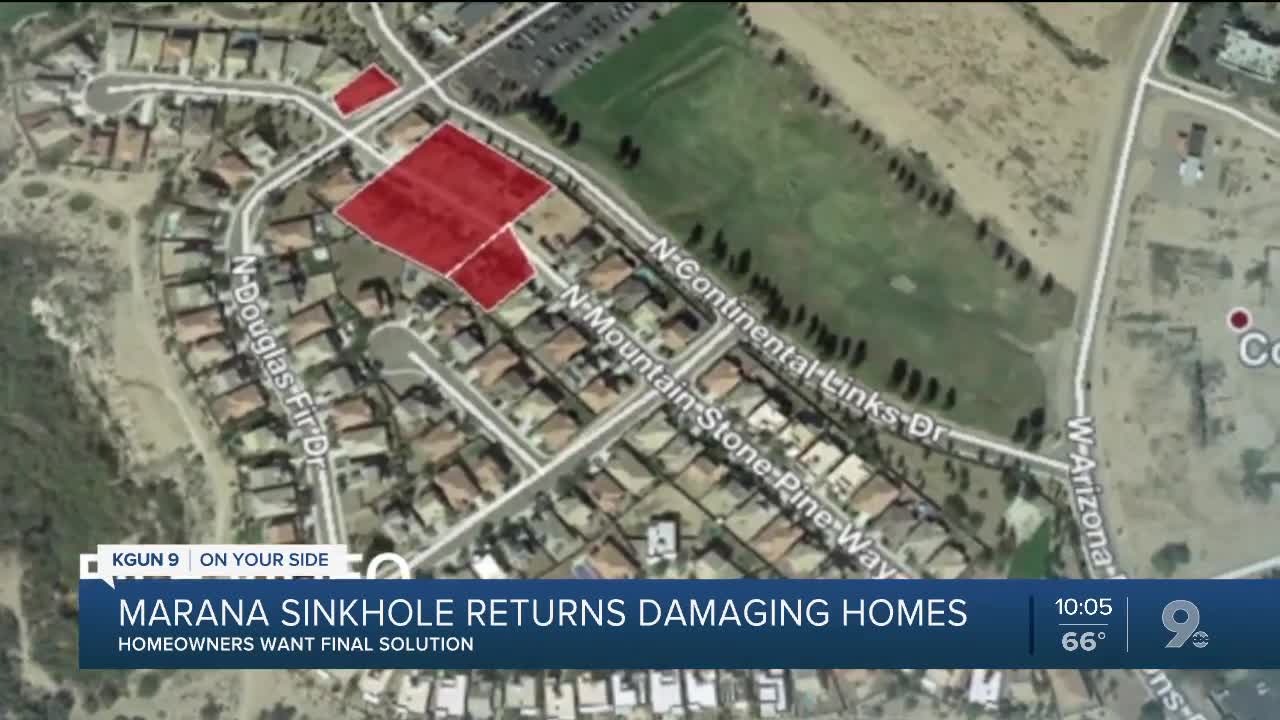 First time home owners Frank Peebles and Homa Shayan say they bought their home nearly 1 year ago and now the ground is shifting on their property. The result is cracked foundations, walls and more. 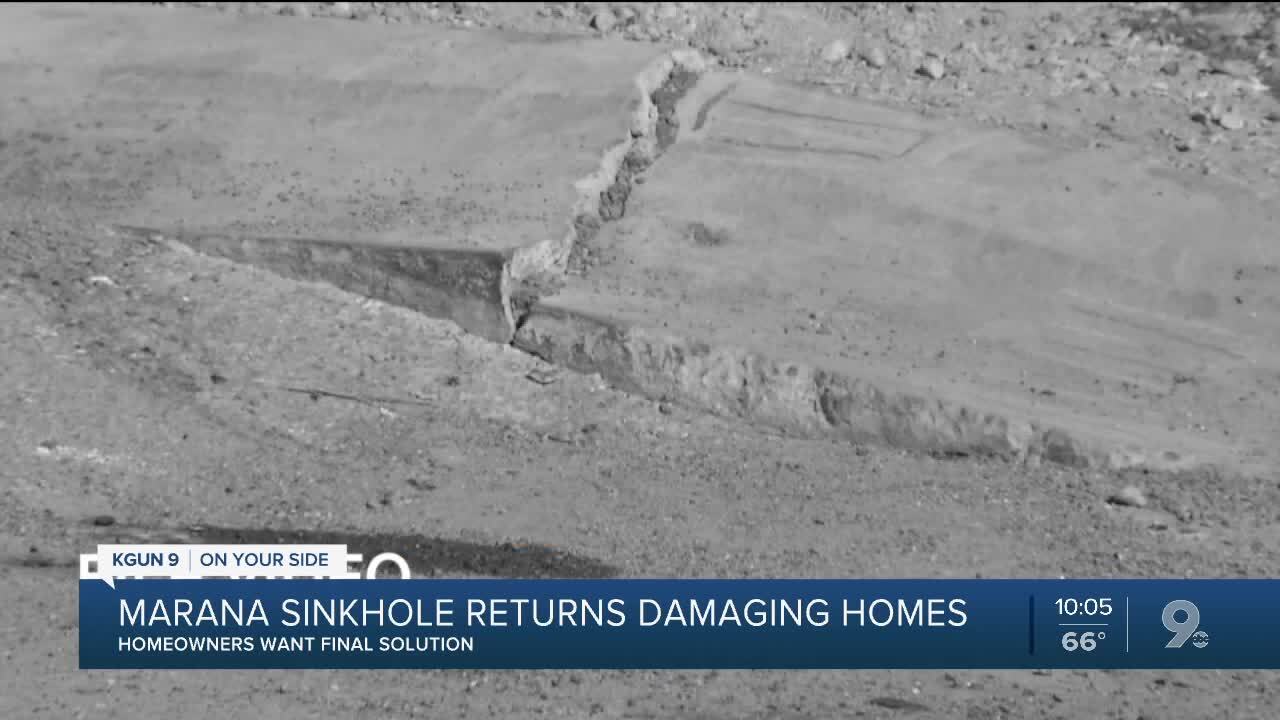 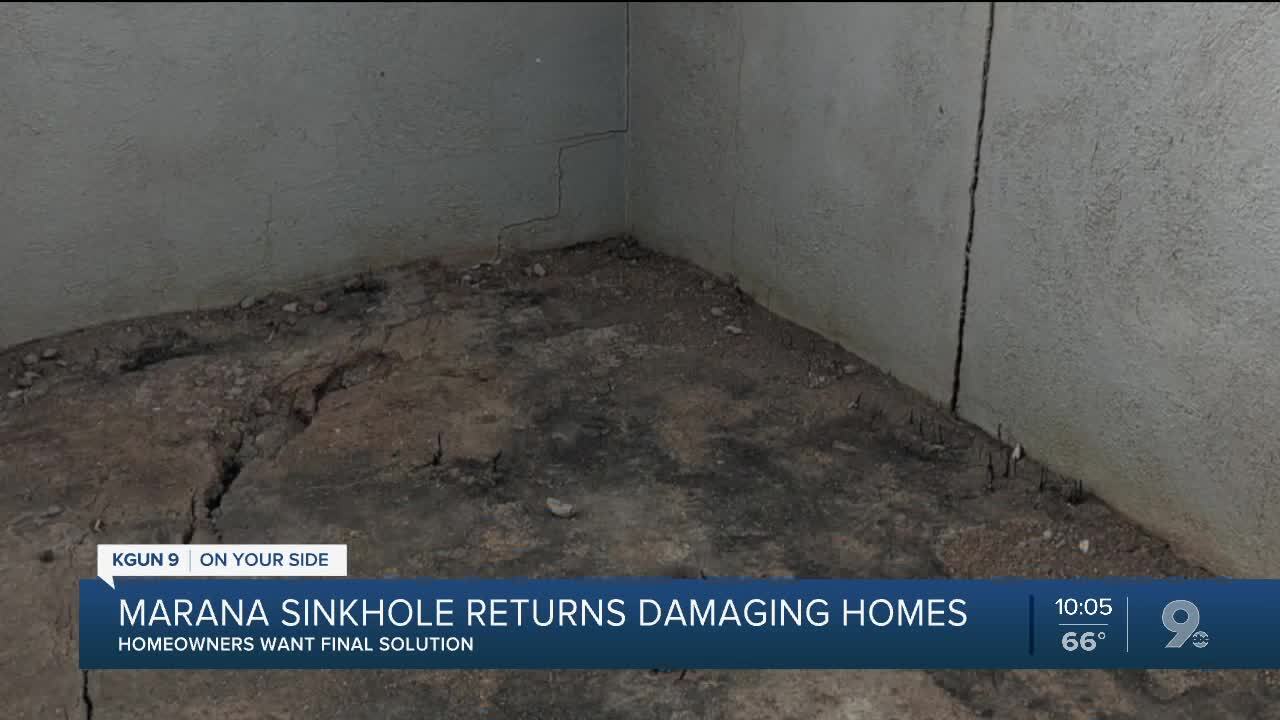 TUCSON, Ariz. — A sinkhole in a Marana neighborhood is affecting homeowners once again and they want answers. In 2015, KGUN first brought you the story about the Pines 1 neighborhood when homeowners were dealing with a sinkhole that was damaging streets and homes. Now 5 years later the sinkhole problems are back at a newly affected home along the 8400 block of N. Mountain Stone Pine Way Drive .

First time owners Frank Peebles and Homa Shayan say they bought their home nearly 1 year ago and now the ground is shifting on their property. The result is cracked foundations, walls and more. A sinkhole that started from an old gravel pit where the homes were built caused major issues years ago. Now after repairs by the town of Marana and builder Richmond American Homes the sinkhole is causing problems in a different part of the neighborhood. Peebles says his homeowners insurance won't cover it. The new issues are at a home near where the problems occurred in 2015.

“It literally goes up to our house and is damaging the exterior and interior of our home,” Peebles said.

Neighbor David Hendl had the first round of repairs done at his home, he says the he wants the sinking to stop.

KGUN 9 reached out to the town of Marana and officials say they will do the same repairs they did 5 years ago. The plan is to have engineers inject a polymer foam 34-feet below the surface to stabilize the streets and rebuild damaged boundary walls. Officials also say they are working on preliminary on estimates to get the work done on the property and plan to get it approved by the town council. Approval is needed because the project wasn't planned or budgeted. Officials are hoping to stop the ground issue once and for all and work with the builder to resolve other issues on in the area. Officials say the originally repaired roads and homes were not affected .

“Richmond homes just flat out told us good luck its not our responsibility. We pay our taxes, we pay our mortgage, we pay our insurance we shouldn’t be responsible for someone else's mistake,” Shayan said.

The builder Richmond American Homes responded to calls via email with the following statement:

"Richmond American Homes does not comment publicly on individual customer concerns, but we do take them very seriously. We are looking into this homeowner's situation."

Now Peebles is hoping to get his home fixed up and fast before it gets worse and he's hoping for the best.

“We need them to step up and do what’s right,” Peebles said.