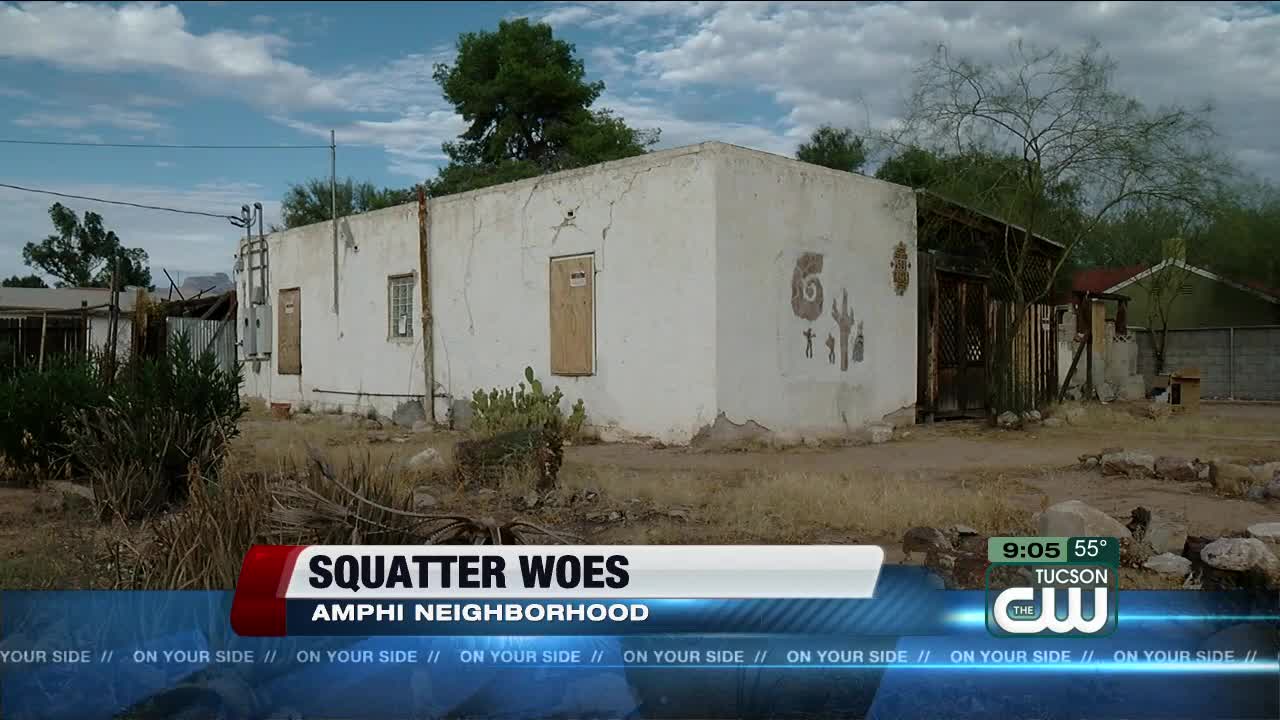 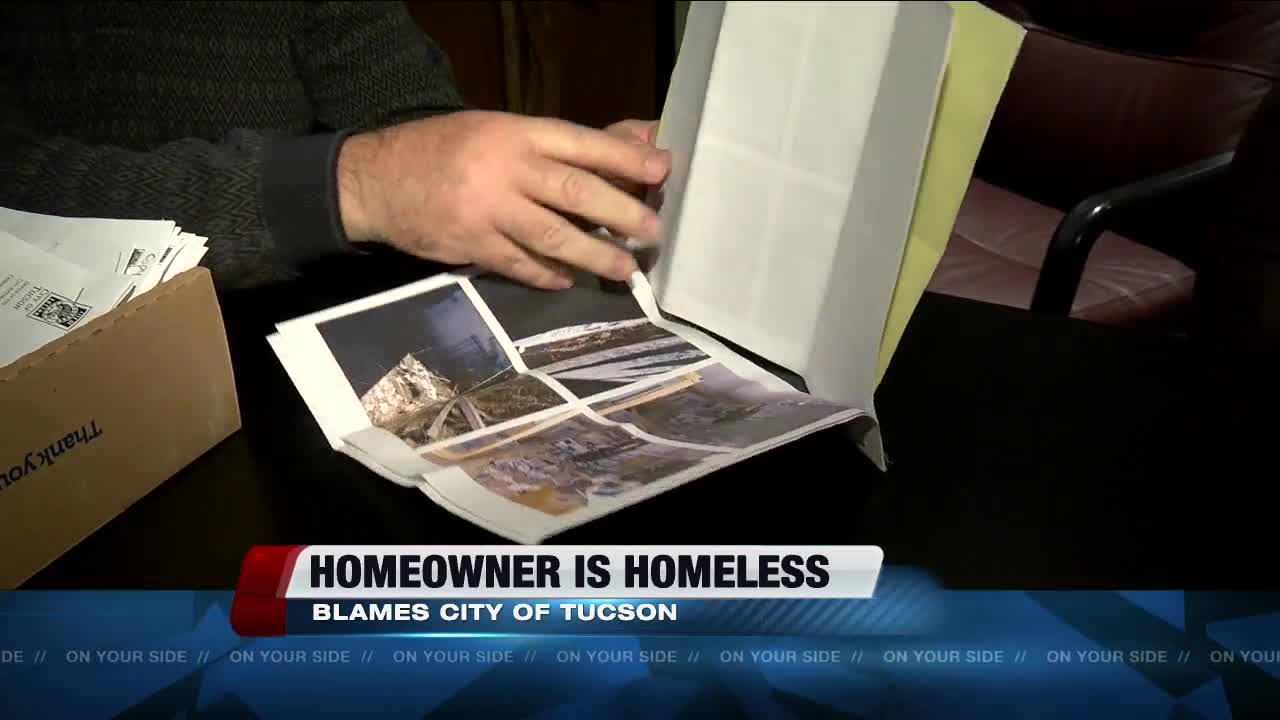 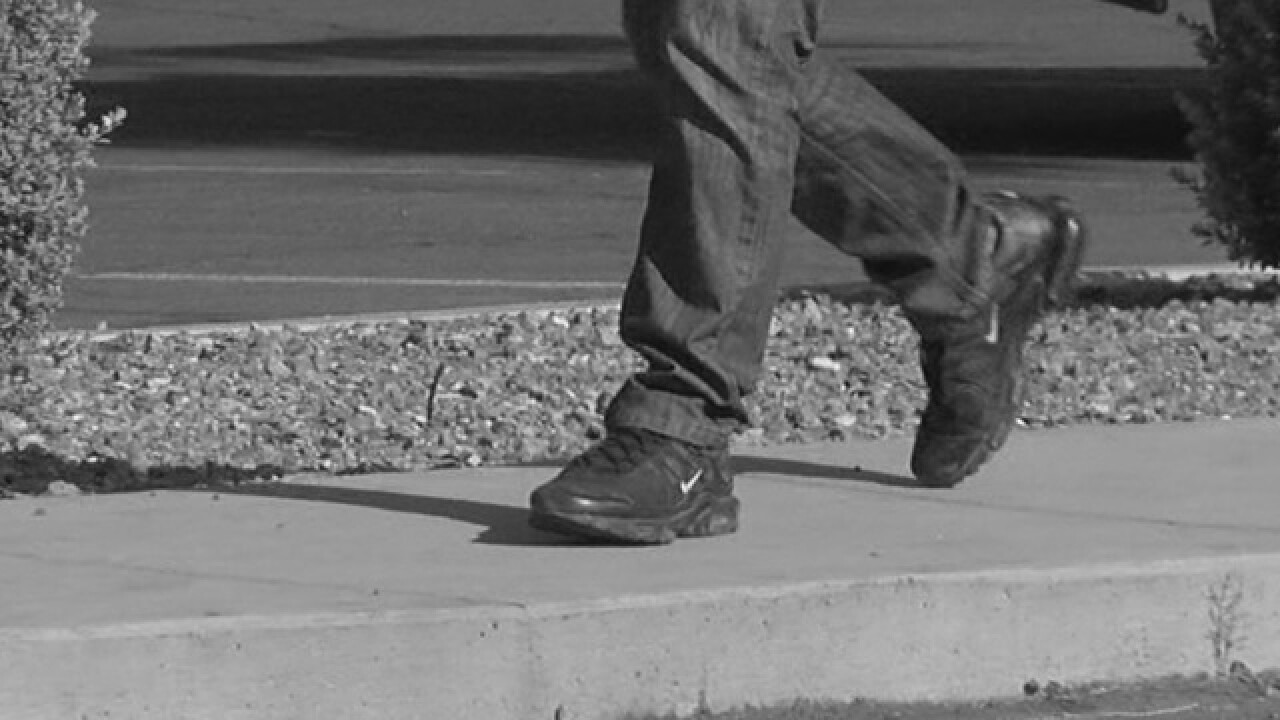 TUCSON, Ariz. — A Tucson man says he's fed up with crime and other issues in his neighborhood. He claims that squatters ran him out of his home and blames the city of Tucson for his problem. Glen Wolfgang says that vagrants took over his home and adjacent property at the 500 block of East Mohave Road in the Amphi neighborhood. His home has a cracked foundation, boarded up windows ripped electric panels and more. He says his home is destroyed and now he's a homeowner who's homeless.

"I deserve better than this. They're just wandering around and stealing whatever they can. I pay a $600 mortgage every month. The neighborhood I live in is essentially under siege from vagrants. They would just kick my door in and come in and I would come home and people would be sitting on my couch," Wolfgang said.

In 2017 the property too a major dive, that's when Wolfgang started working as a charter bus driver and was gone for days at a time. One day when he came back from a trip he discovered that his home had been burglarized. With the invasion he says the inside of his home was literally trashed resulting in a laundry list of code violations. Wolfgang says he has called Tucson police more than 11 times over the years and has been threatened by squatters when he tried to work on the property. He also claims that someone stole his ID from the home and used it to commit fraud.

"I was robbed and after that they started breaking into the house. Anything I fixed would get broken again. The catch and release policy of the city of Tucson there's really no stopping them there's no fear in them," Wolfgang said.

"The place just needs to be bulldozed that's what it needs to happen to keep people from squatting in there," MacGowan said

In 2017 Tucson police were called to the property because the home as unsecured and unsanitary.
In 2018 the home was vacant with vegetation violations, Wolfgang worked to clear it up. Later that same year the property became a dumping ground for furniture.

In January of 2019 the city of Tucson says the home was abandoned and police found squatters and boarded the property up. 6 months later the city condemned the home and Tucson Electric Power disconnected power lines connected to the home for safety reasons.

Then on October 23, 2019 the city sent a letter to Wolfgang stating that he has 60 days to fix the property up or it will be demolished. The owner can appeal and ask for more time and case can go to court. After the 60 days A judge can decide to agree to an extension or allow the city to tear the home down. If the home is demolished a $42,000 lien will be placed on the property.

Tucson police officer Preston Hould has been handling calls at the property for years. He says the area has issue and the are is a designated hot spot for extra patrols. He also says that owners should take responsibility for their property. Hould has arrested over 24 people at the property over the last two years. Police have say people use the property to commit crimes.

"We secure it with screws we have the repeated board ups. We found trash, human feces and syringes. There was an incident where there was a pool of blood unaccounted for. This is a school bus stop there's a park within a block of here. We have 6 daycare's or schools within a 3 -4 block radius," Hould said.

9 On Your Side also received the following statement from Ward 3 council member Paul Durham who covers the Amphi neighborhood.

"Mr. Wolfgang abandoned his property, which has been in violation of Tucson City Code for years. Neighbors, Code Enforcement and TPD have pleaded with him to fix up the house. After years of inaction, the City has given him another chance to bring the property up to code, which every other homeowner must also follow. The house significantly reduces quality of life in the neighborhood and is a drain on city resources. If he doesn't move to abate his property in the next 60 days, we will seek a court-ordered demolition. It's a public health and safety hazard and if the property owner won't take action, we will."

At the end of the day Wolfgang says that tearing down his home won't solve the problems in the neighborhood.

"Two years from now the same homeless people, the same drug addicts are going to be in the empty lot," Wolfgang said.