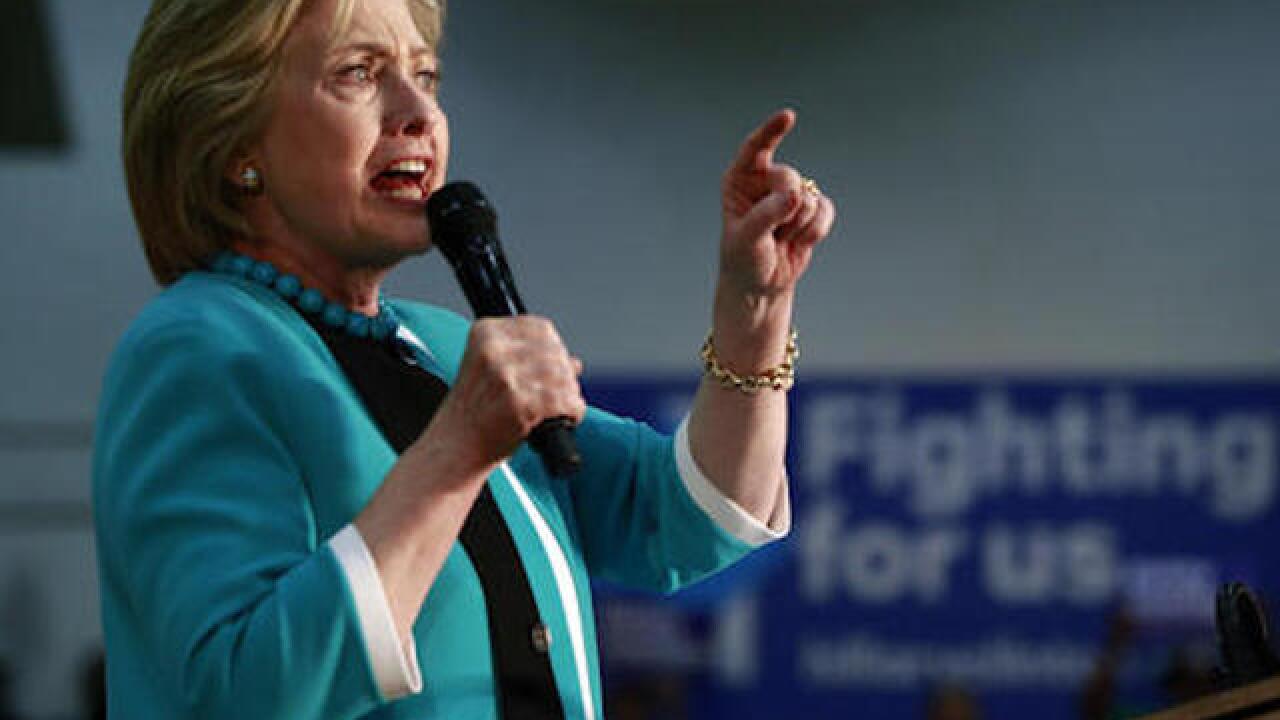 Copyright Associated Press
Damian Dovarganes
<p>In this photo taken May 5, 2016, Democratic presidential candidate Hillary Clinton speaks in Los Angeles. The State Department says in a new court filing that it can find no emails to or from a former Hillary Clinton aide who worked for the agency and also managed Clinton's private computer server during her stint as secretary of state. (AP Photo/Damian Dovarganes)</p>

WASHINGTON (AP) — For Donald Trump, the mass shooting in Florida was a moment to redouble his call for tougher action against terrorism and to take credit for "being right" about the threat. For Hillary Clinton, it was a time to choose words carefully and reiterate her call for keeping "weapons of war" off America's streets.

The responses of Trump and Clinton to the deadliest mass shooting in modern U.S. history — 49 were killed and dozens were injured — were a study in contrasts for the two presumptive presidential nominees — one of whom will soon be leading a country fearful of terrorism, gun violence and the often merciless intersection of the two.

What we know about Omar Mateen

The motive behind Sunday's early morning rampage at a gay nightclub in Orlando was unknown when Trump and Clinton began weighing in — although a law enforcement source later said the gunman, identified by authorities as Omar Mateen, a 29-year-old American citizen, made a 911 call from the nightclub professing allegiance to the leader of the Islamic State.

As information began trickling out, Trump took to Twitter to say he was "praying" for the victims and their families. "When will we get tough, smart & vigilant?" he wrote.

Within a few hours, the presumptive Republican nominee was back on social media saying that he'd appreciated "the congrats for being right on radical Islamic terrorism." After President Barack Obama did not use that same phrase to describe Mateen in his remarks from the White House, Trump released a statement saying the president "should step down."

Trump kept up his criticism of the president Monday. He told NBC's "Today Show" that "there are a lot of people that think that maybe (Obama) doesn't want to get" the terror threat facing the country.

Trump is hardly the first politician to try to capitalize on a tragedy, though he's more blatant than most in connecting his electoral prospects to incidents of unimaginable suffering. Shortly after last year's deadly attacks in Paris, Trump said, "Whenever there's a tragedy, everything goes up, my numbers go way up because we have no strength in this country. We have weak, sad politicians."

After a deadly December shooting rampage in San Bernardino, California, Trump stunned many in his own party by calling for a temporary ban on Muslims coming to the U.S. Rather than sink his political prospects, it helped propel the businessman to his first victories in the GOP primary.

For Trump's detractors, his comments can appear jarring and crass. But he's also tapped into a deep frustration among some voters who believe Obama has been handcuffed in his response to terror threats because he's worried about offending Muslims in the U.S. and around the world.

"We can't afford to be politically correct anymore," Trump declared Sunday. He canceled a rally scheduled for Monday, but planned to go forward with a speech in New Hampshire, changing the topic from his case against Clinton to national security.

Clinton, who is more schooled in the political customs of responding to tragedies from her years as a senator and secretary of state, was careful in her initial comments. The presumptive Democratic nominee also made her first remarks on Twitter early Sunday, writing: "As we wait for more information, my thoughts are with those affected by this horrific act."

Like Obama, Clinton prefers to avoid early missteps even if that leaves her looking overly cautious. On Sunday, she waited for the president to declare the shooting an "act of terror" before doing the same.

Clinton didn't avoid the prospect of a link to international terrorism in her statement, though she was vague in her language. In several televised phone interviews Monday morning, she warned against feeding propaganda by the Islamic State group that convinces new recruits the U.S. hates Islam.

"Turning against the Muslim American community is not only wrong, it's counterproductive and dangerous," she told MSNBC.

Clinton did use the shooting to raise the nation's failure to keep guns "out of the hands of terrorists or other violent criminals." Federal authorities said later Sunday that Mateen purchased at least two firearms legally within the last week or so.

Clinton and Obama postponed plans to campaign together Wednesday in Wisconsin, a decision driven both by political appearances and an expectation the president would need to spend his week overseeing the government's response to the shooting. Still, Clinton planned to continue with solo campaign stops Monday in Ohio and Tuesday in Pennsylvania.

Whether the tragedy in Orlando ultimately sways the trajectory of the general election campaign is unknown. If current trends hold, there will be more deadly mass shootings in the U.S. before voters head to the polls in November.

Other unforeseen events will likely also shape the race over the next five months, as the 2008 economic collapse did in the closing weeks of that year's presidential campaign.

But as voters begin seriously weighing Clinton and Trump as their next commander in chief, Sunday's shooting left little doubt that the choice between the two candidates is stark.