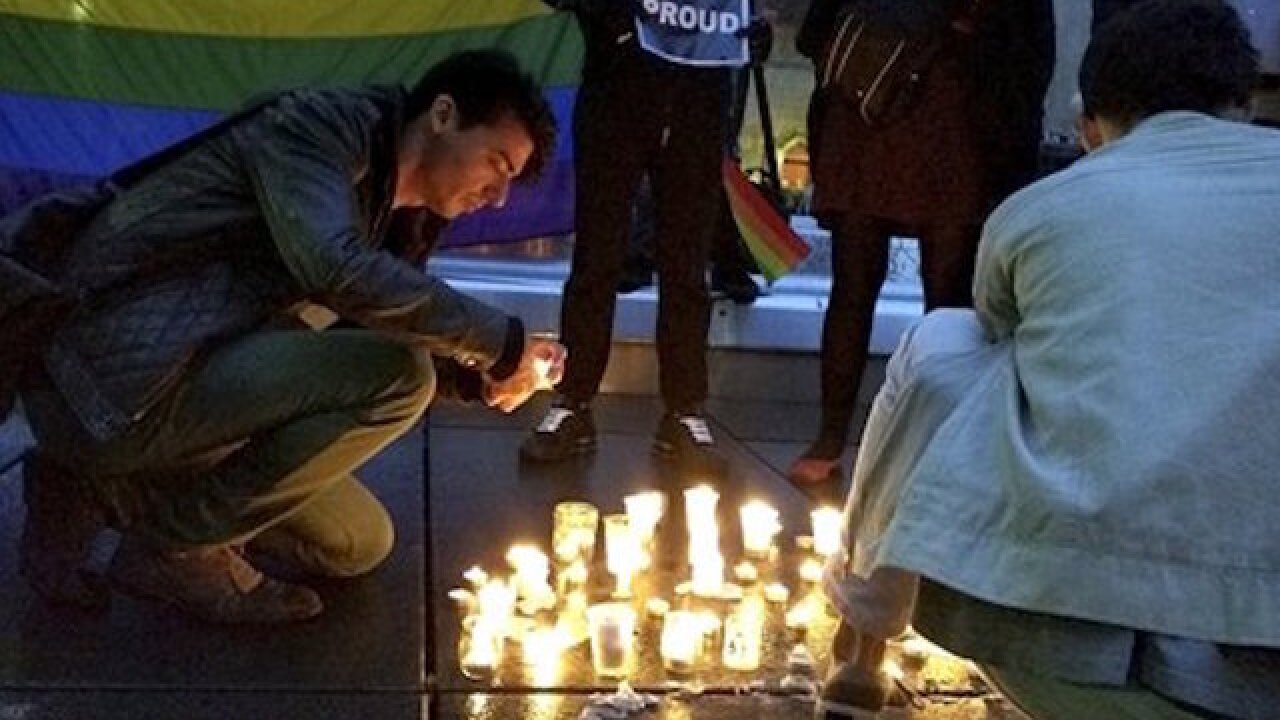 Copyright Associated Press
Rapahel Satter
<p>A man lights a candle during a spontaneous vigil to remember those slain and wounded at an Orlando nightclub, Sunday June 12, 2016 in Paris. Several people were draped in rainbow flags. They lit candles and took pictures as a person in head-to-toe fetish gear held up a sign saying "Proud." (AP Photo/Raphael Satter)</p>

From across the world, officials and public figures are expressing condemnation and shock over the Florida mass shooting at the Pulse Orlando nightclub on Sunday when police say a gunman wielding an assault-type rifle opened fire, killing at least 49 people and wounding dozens. The gunman also died.

The Eiffel tower will shine in the colors of a rainbow on Monday night, starting at 10:45 p.m. (2045 GMT) to honor victims of the mass shooting at an Orlando gay club. Paris City Hall will pay its respects starting at about 1:30 p.m. (1130 GMT) when American and rainbow flags will fly.

France feels deeply the horror of deadly attacks after the November terror attacks on a music hall, restaurants and bars and the main sports stadium killed 130. That was preceded by attacks on a satirical newspaper and a kosher grocery store. All were claimed by the Islamic state group.

J.K. Rowling says one victim of the Orlando killings worked on the Harry Potter Ride at the Universal Studios theme park.

The author tweeted a picture of 22-year-old Luis Vielma in a Hogwarts school tie, and said: "I can't stop crying."

Queen Elizabeth II and Prime Minister David Cameron have sent messages of condolence from Britain for the attack, which killed 50 people at a gay nightclub.

Buckingham Palace says the queen sent a message to President Barack Obama saying: "Prince Philip and I have been shocked by the events in Orlando. Our thoughts and prayers are with all those who have been affected."

German Chancellor Angela Merkel says it's important to continue with "our open, tolerant life" following attacks such as the mass shooting at an Orlando gay club.

Speaking during a visit to China on Monday, Merkel said that "we have a heavy heart" over the fact that "the hatred and malignancy of a single person cost over 50 people their lives."

She added: "We are firmly determined, even when such murderous attacks put us into deep sorrow, to continue with our open, tolerant life."

Israeli President Reuven Rivlin says in a letter to President Barack Obama that Israel stands "shoulder to shoulder with our American brothers and sisters" after the attack on the LGBT community. Rivlin sent his condolences, saying there is "no comfort for those who have had their loved ones torn away from them."

The Orlando attack has dominated news in Israel, which has seen a wave of Palestinian attacks in recent months. On Wednesday two Palestinian gunmen killed four people at a popular shopping and restaurant area in Tel Aviv. LGBT groups in Israel planned rallies and other support for the community in Orlando.

Palestinian Prime Minister Rami Hamdallah says the deadliest mass shooting in U.S. history is a "senseless act of terror and hate" and that "Palestinians stand with the American people in this difficult time."

The statement made no direct reference to the LGBT community. Homosexuality is deeply taboo in the conservative Palestinian society as it is throughout most of the Arab and Muslim world and in Saudi Arabia, judges can issue the death penalty for same-sex relations. Gay Palestinians tend to be secretive about their social lives and some have crossed into Israel to live openly safely.

Afghanistan's Chief Executive Abdullah Abdullah told the Cabinet as he opened the weekly meeting live on television on Monday morning that the Orlando attack "tells us that terrorism knows no religion, boundary and geography. Terrorism must be eliminated."

He says that Afghans "do not support terrorism but the victims of terrorist attacks" and offered his condolences to the people and government of the United States."Our hearts and minds are with our U.S. partners." He also urged "collective actions to end such attacks."

Kuwait's Foreign Ministry says the government strongly condemns the "terrorist attack" that took place in Orlando, adding that the escalation of such assaults requires a doubling down of efforts on the part of the international community to eliminate "this disgusting phenomenon."

Last year, 27 people were killed by an Islamic State suicide bomber in Kuwait during prayer at a mosque in the capital.

Egypt's statement urged for international solidarity and a "firm, comprehensive approach to confronting terrorism, which knows no borders or religion, and is incompatible with all humanitarian principles and values."

The United Arab Emirates — home to the Western-friendly metropolises of Abu Dhabi and Dubai— condemned "the terrorist attack" in Orlando, expressed its solidarity with the United States and called on the international community to work to "eliminate the scourge of terrorism."

Japanese Prime Minister Shinzo Abe has condemned the Orlando nightclub attack and expressed condolences to the victims and their families.

Abe told reporters Monday in Oita that "Japan stands together with the people of the United States" and that "this despicable act of terror cannot be tolerated."

Australian Prime Minister Malcolm Turnbull said that the Orlando mass shooting was "an attack on all of us — on all our freedoms, the freedom to gather together, to celebrate, to share time with friends."

He said he spoke with the U.S. ambassador to Australia, John Berry, "and formally conveyed to him Australians' sympathy, condolences and resolute solidarity in the face of this shocking act of hate and terror."

"Together, at home and abroad, we continue the fight against terrorism and stand up for the values of our free nations," Turnbull said.

The mass shooting at an Orlando gay nightclub happened shortly after a same-sex kiss was removed from a production of the musical "Les Miserables" in Singapore, and after the government said it would look into rules of foreign funding for gay pride parades like Pink Dot.

Law Minister K. Shanmugam said on Facebook: "Another senseless shooting. ... It just goes on and on. The madness is not going to stop."

The prime minister of Muslim-majority Malaysia, Najib Razak, said he was "horrified" by the Orlando mass shooting. "Islam abhors killing of innocent people," he tweeted.

A few Malaysians, using pseudonyms, wrote on social media that they approved of the attack at the gay nightclub because the victims were "sinners," but they were quickly condemned by many others.

Pakistan's former military ruler Gen. Pervez Musharraf condemned the Orlando shooting, saying 'this is a sobering reminder that extremism and terrorism are on the rise.'

Musharraf, who is facing court cases at home but left Pakistan in March for treatment abroad, says on his Facebook page the world must "address the root causes of global terrorism to suck the oxygen out of the extremist narrative of hate, intolerance, bigotry and the promotion of obscurantist ideology that is radicalizing vulnerable Muslims around the world."