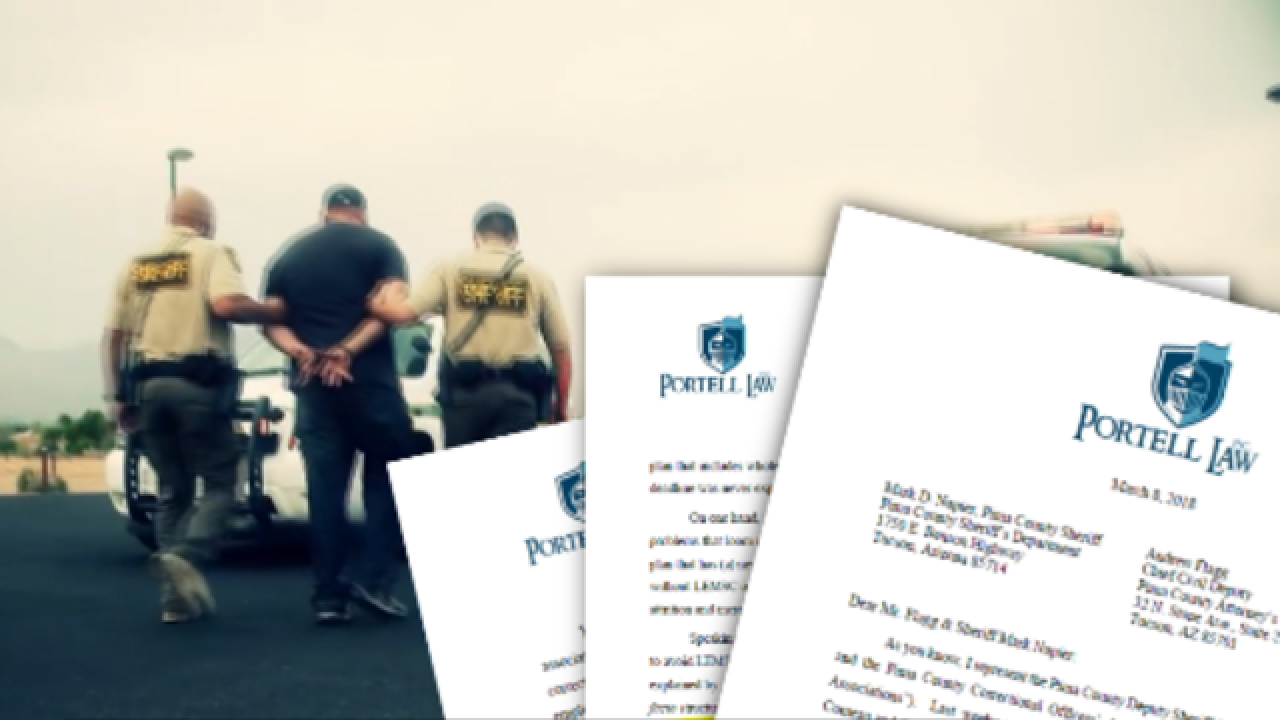 By: Valerie Cavazos
Posted at 5:53 PM, Mar 08, 2018
The dispute rages on over the Pima County Sheriff’s new pay plan. The largest union group says Mark Napier gave leaders an ultimatum to unanimously support his compensation plan by today -- or he’ll abandon all his efforts to fix the pay problems. KGUN9 has learned the largest union told Napier they will NOT get behind his plan and are moving forward without him. The other union says they do support the proposed plan.

With the two unions divided, the question now is – what will happen next?

DISSENSION IN THE RANKS

The pay problems have plagued the Pima County Sheriff’s Department for more than a decade. A pervasive problem that Sheriff Mark Napier has said led to eroding morale and staffing shortages within the department. Napier vowed -- before he took office -- to fix it. A year later, his efforts set off a legal fight, an unprecedented challenge of authority and dissension in the ranks.

Cervantez says Napier hosted an impromptu meeting February 28th with leaders in the 2 union groups – the Fraternal Order of Police and the PCDSA. Four leaders of the PCDSA, one of whom documented the discussion, sent a letter to the sheriff on March 1st recounting Napier’s substantive statements. The letter reveals Napier told the group he needed “unanimous support from all four associations by March 9th at 9 a.m. or he would ‘stop pursuing compensation’. He emphasized, ‘I don’t have to do this’.”
The leaders wrote to Napier stating, “You reiterated several times that we needed to support your new pay/benefit plan by March 9th and that you believed your plan was consistent with maintaining your campaign promises by implementing a new pay plan. However, you warned us that the failure to unanimously support your new pay/benefit plan would result in your abandoning all efforts to “fix” compensation problems in PCSD.”
In the letter, the leaders expressed concern over the lack of critical details, such as merit assessments, oversight procedures and disciplinary actions, that they would need to provide their members. They say Napier has never given them any written plan.
Cervantez told KGUN9, "We have a lot of underlying questions. I don't think it's very wise to hold us to that sort of commitment without knowing what kind of compensation plan it’s going to be."
KGUN9 reached out to Napier about the March 1st letter. He responded, “I believed this to be an internal informal discussion. Unfortunately, members of one of the four associations present have taken a few comments out of context.” Napier had told KGUN9 earlier, “The March 9th deadline is simply for the associations to indicate support for working together on compensation reform or for them to elect to pursue their own plans.”

A day before the deadline, the largest union group decided to pursue their own plan. Steve Portell, the attorney representing the PCDSA and PCCOA, wrote a letter to Napier informing him that the union group “could not endorse a plan that has never been provided in writing, purports to change job classifications without LEMSC oversight and approval, and will likely result in accelerated employee attrition and increase wage compression. The necessity of your short deadline was never explained. That has left the PCDSA and PCCOA at an impasse.”
KGUN9 immediately reached out to Sheriff Napier, who was out of town this week attending a Sheriff’s conference, for a response. He wrote, "I am disappointed, but respect their sentiment. I hoped we could work together to refine the concept of merit-based compensation to an actual plan that would make compensation to an actual plan that would make compensation more predictable and agreeable to everyone."
KGUN9 asked Napier, “Will you abandon all efforts to fix the compensation issue as you had discussed in the associations meeting?” Napier replied, “I will review when I return to office. Would like to respect the opportunity for the other two associations to have their voices heard.”
KGUN9 has learned the other union group -- under the Fraternal Order of Police -- told Napier they are supporting his plan. In a letter dated a day before the deadline, President Costaki Manoleas wrote, “There is still an abundance of concern with the supervisor review and the educational tasks that will be implemented. We look forward to participating in the creation of the guidelines surrounding the pay plan with you and the other groups with hope that our input will alleviate that concern.”
Manoleas told KGUN9, “In our opinion, the Sheriff didn’t give the four union groups an ‘ultimatum’, he gave us an opportunity to work with him, the Command Staff, and the Board of Supervisors to achieve a plan to a competitive compensation plan. He asked us to help him create the plan criteria.” Manoleas added, “We did not consider today’s date a ‘deadline’, it’s more of a planning period.”
KGUN9 followed up with Napier – after the 9am deadline – and received this response, “I am booked today with meetings and commitments. Will respond early next week.”
UNPRECEDENTED CHALLENGE OF AUTHORITY
Meantime, Eric Cervantez says the PCDSA and PCCOA is moving forward to fix the pay problems by working with LEMSC – the Law Enforcement Merit System Council.
He told KGUN9, “As chairman of the associations, we’ll continue to work with LEMSC, that authority body, and work with the Board of Supervisors.”
The 5 LEMSC members discovered through the union that the commission is in charge of determining pay classifications of sheriff's deputies and recommending pay for those jobs -- not the sheriff. Portell told KGUN9 that LEMSC’s role is to prevent elected offices, like the sheriff, from using job classification and pay to illegally intimidate, harass and/or punish law enforcement officers.

Chair Georgia Brousseau had told KGUN9 that LEMSC was unaware of its legal duty, “I've been here since 1991 and never heard about it, but it's in the law. We are obligated to follow the law. We're trying to gather information to help us plan an appropriate recommendation to the Board of Supervisors for appropriate payment in these areas."

They met for the first time on Feb. 27th to begin the process of reviewing the sheriff's pay package, which both LEMSC and the union had never seen. Portell told the council he's concerned Napier is not waiting for the council's recommendation and insisted the deputies get behind his pay package by March 9th. He told them, "Yesterday, the sheriff made a statement to his department at a meeting in his office that he did not recognize LEMSC's authority."

KGUN9 had asked Brousseau for her response, "First, I would need to hear that from the sheriff. Second, I would recommend the sheriff read the law."
Following the LEMSC meeting, KGUN reached out to the sheriff, who denies that he said he didn’t recognize LEMSC’s authority. He said "the authority and scope of the council is clear in the law" and he only objected to the meeting held (Feb. 27).
But the leaders say Napier is not telling the truth. In the March 1 letter to Napier, the leaders stated, “You were asked specifically whether you would work with LEMSC on your new pay plan, and you said ‘no’. You did not elaborate on why you would not work with LEMSC. We mentioned that we were attending a meeting of LEMSC the following morning and asked whether you would be participating in that process. Again, you said ‘No’ and explained that you believed LEMSC could only make recommendations to the Board of Supervisors and that you did not recognize their (meaning LEMSC’s) authority.”
Cervantez told KGUN9, “What came out from the meeting, he was not going to work with that body (LEMSC).”
The leaders wrote in the March 1st letter to Napier that they were disappointed he did not participate in the public hearing or provide LEMSC with a copy of the new plan. They stated, “LEMSC specifically called out for you or your representative to provide information and you had refused to cooperate. This led some members of LEMSC to remark that they would proceed with their statutory duty with or without your participation.”
KGUN9 reached out to Napier about the statement in the March 1st letter. He responded, “I recognize the statutory authority of the LEMSC to make recommendations as clearly outlined under ARS 38-1003.  I have not shared a plan with them, as the merit-based approach is still conceptual in nature and many elements still need to be refined.  I have no further comment.”
We’ll continue to investigate and follow the developments.

PCSD deputies speak out: "We feel abandoned and lied to again"