Arizona Wildcats basketball forward Ray Smith will miss the entire 2016-2017 season due to a knee injury.

Arizona Wildcats basketball forward Ray Smith will miss the entire 2016-2017 season due to a knee injury.

According to Arizona Athletics, Smith will have surgery to repair an injured ACL in his right knee within the next month and start his rehabilitation process after. Smith also missed last season with an injury.

Smith, a coveted recruit whose career has been stifled by injuries, was injured Tuesday night in an exhibition game against College of Idaho.

Smith tweeted about saying goodbye to basketball and posted this photo. 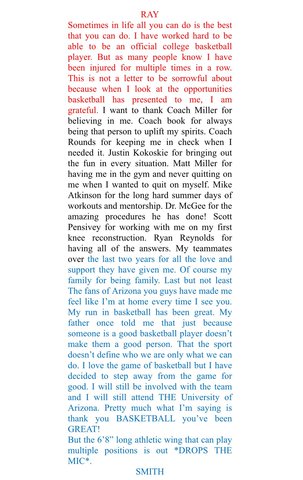 The loss of Smith is particularly harmful to Arizona because star shooting guard Allonzo Trier has been sidelined for unexplained reasons and up-and-coming center Chance Comanche has been suspended from the team for academic reasons.

No. 10 Arizona opens the season against No. 12 Michigan State Nov. 11 in Honolulu.

"About a year ago I began my statement regarding Ray Smith’s season-ending injury by saying, 'Ray Smith is one of the most talented young players that has ever entered our program.' Unfortunately, I begin this year’s statement by reiterating the special talent that Ray has on the basketball court and once again addressing a season-ending knee injury."

"In the 25 years I have been a college basketball coach, I have never felt as helpless as I did when I saw him go down on Tuesday night. No 19-year-old kid should have to experience three season-ending injuries in a 30-month period of time. I have watched Ray work with our strength and conditioning coach tirelessly for two years. I have seen him in our training room around the clock, doing everything he can to play the game he loves. To witness his extraordinary efforts and see this happen to him once again is beyond disheartening.
"Ray is surrounded by a community that loves Arizona Basketball, current and former teammates that look at him as a brother, and a coaching staff and family that is beyond supportive and forever with him. Although the mountain that Ray is climbing continues to change, my belief in him to be a resounding success in life has never been stronger. His intelligence, charisma and sheer will position him to be special in all that he does. I certainly look forward to helping him, as part of our basketball family, reach all of the goals that he sets out to achieve.”