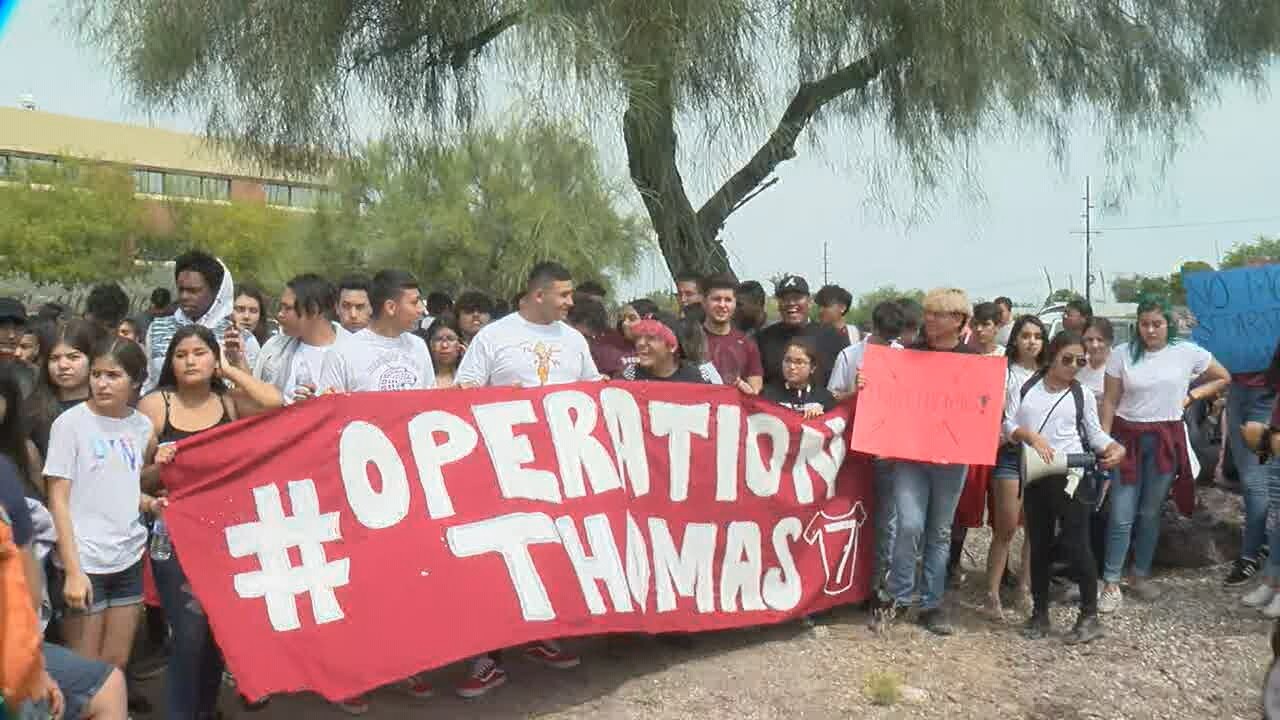 Students at Desert View High School walked out of class Monday morning after Border Patrol agents detained a fellow classmate and football player over the weekend. 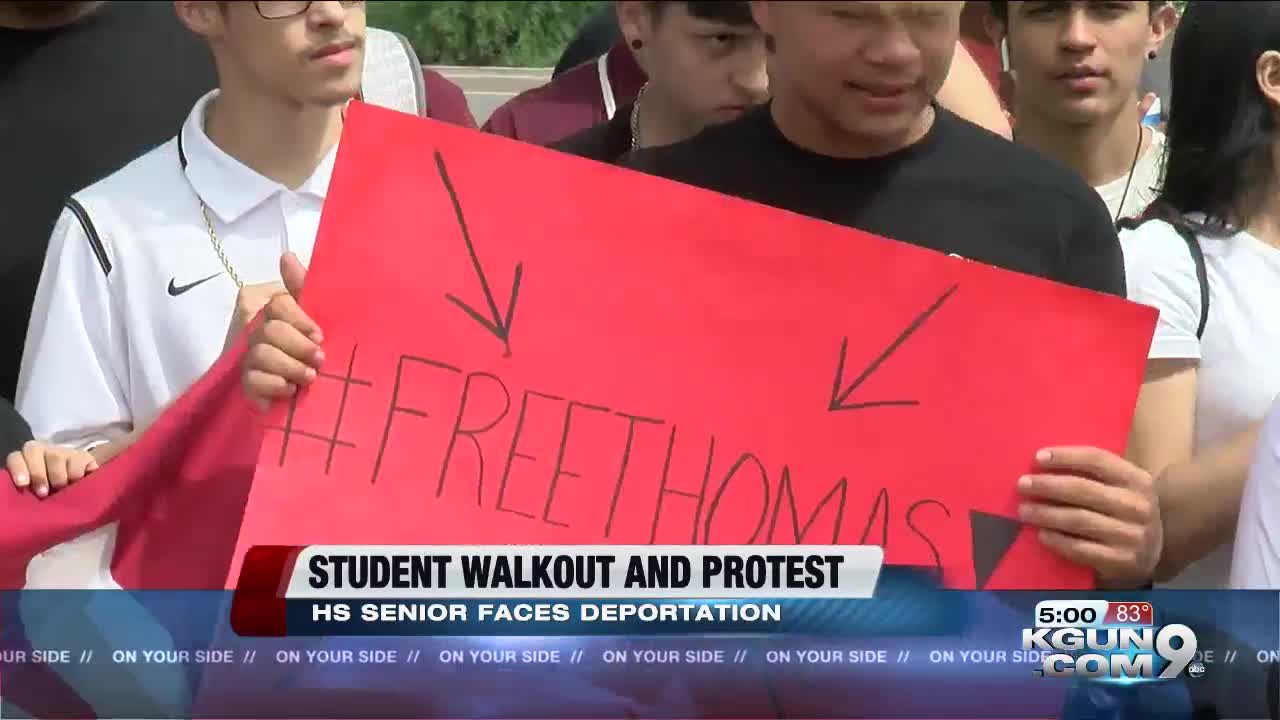 TUCSON, Ariz. - About 120 high school students in southern Arizona protested Monday to demand the release of their classmate, who they say is being held for possible deportation following a traffic stop.

Thomas Torres, a senior about to graduate from Desert View High School in Tucson, was taken into custody Thursday by sheriff's deputies and turned over to Border Patrol, said Victor Mercado, a spokesman for the Sunnyside Unified High School District.

Border Patrol and Pima County sheriff's officials did not immediately answer requests for information and comment. (editors note: full statement from the Pima County Sheriff's Department can be found at the bottom of this article.)

Mercado said Torres, 18, has a court date on May 22, the same day he is supposed to graduate.

"Thomas is the American Dream," said one of the many homemade signs carried by the students protesting outside the sheriff's office. Other signs read, "Abolish the Border Patrol" and "Without Justice, There is No Peace."

Lorena Rodriguez, a family friend who launched a GoFundMe page to raise money for Torres' legal costs, said the boy was a toddler when his relatives moved from Mexico to the U.S. "to seek a better future."

Rodriguez said Torres' family had long since returned to Mexico and he had been living with her family as a close friend of her brother, who also is scheduled to graduate.

She said Torres called the family from a detention facility in Casa Grande. He told them he was driving when he was stopped by sheriff's deputies for going slightly over the speed limit, but was unable to produce a driver's license.

Arizona does not issue licenses to people who are in the county without authorization.

Rodriguez said Torres and her brother had already picked up their graduation robes, which are hanging in the bedroom they share.

Torres attended Desert View High School for the past four years, where he was involved in school and sports activities, said Rodriguez. She said he also worked busing tables at local restaurant, as well as doing yard work and other side jobs.

"People like Thomas are needed in this country," Rodriguez wrote on the fundraising site. "He's a hardworking young man willing to better his future."

The Pima County Sheriff's Department full statement can be read below:

Through observation, the Sheriff’s Department identified two members of CLEPC as potential organizers of the protest. In attempt to prevent the possible spread of misinformation before the planned Board of Supervisors vote on Stonegarden, the following is a summary of what took place the night of the traffic stop.

On the evening of May 2, 2019, at approximately 2156 hours a traffic stop was initiated by a deputy sheriff in reference to a mandatory insurance suspension on the vehicle; a clear situation of reasonable suspicion for a traffic stop. The deputy is assigned to our DUI enforcement unit and was conducting normal traffic enforcement duties. He was not assigned to any Rural Safety Initiative or Stonegarden Operation. Upon making initial contact with the driver, the deputy requested identification as we do in all traffic enforcement situations. The driver was unable to provide any valid identification. The deputy made multiple attempts at identifying the driver during his traffic investigation to include contacting a family member. Ultimately, the driver identified himself as Thomas Torres-Maytorena. He admitted to the deputy that he was in the country illegally. It was at this point Border Patrol was contacted. Border Patrol proceeded to take custody of Torres-Maytorena.

The actions of the deputy are what the Sheriff would expect of any deputy under similar circumstances. The deputy conducted a thorough investigation and utilized all resources available to him in an attempt to identify the driver. Identification of the driver was fundamentally necessary and required to issue valid traffic citations. When informed by Torres-Maytorena that he did not have legal status, the deputy contacted the federal agency in charge of immigration (USBP). In regard to state traffic laws, Torres-Maytorena was given a traffic citation for displaying a plate suspended for financial responsibility, no mandatory insurance, no valid driver’s license, and no current registration. The vehicle was immobilized pursuant to ARS 28-3511.