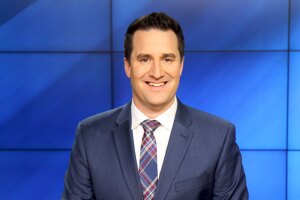 Brian Brennan joined the KGUN9 team just before Christmas 2018 as a weather anchor and reporter.

He grew up in Phoenix and is very happy to be back home in Arizona and close to family.

Brian’s fascination with Weather began as a kid in Arizona watching the intense thunderstorms during monsoon. Seeing ice fall from the sky (in the form of hail) onto the hot desert got him hooked.

He began his career in eastern Washington as a morning reporter but quickly became a main fill in for the weather team. From there he went on to KLAS in Las Vegas where was able to chase those monsoon storms he grew up watching. He was promoted to weekend weather anchor and reporter there, but an opportunity to expand is weather experience arose at KGW in Portland, Oregon.

Brian spent three years in the Pacific Northwest where he learned to forecast for the several microclimates there. He forecasted and reported on high wind, surf, tornadoes, snow, sleet, freezing rain and of course lots of clouds and rain.

Brian also has a passion for telling people’s stories and reporting. He has covered major breaking news, court trials, Nellis Air Force Base, and has put himself at the center of many weather events.

Brian is an avid hiker and is very excited about exploring southern Arizona on his days off. He and his fiancée Brooke are also busy planning a wedding. Please say hi if you see them on the trails along with their dog Sparky!