Fallout shelters: a look back at Tucson during the Cold War 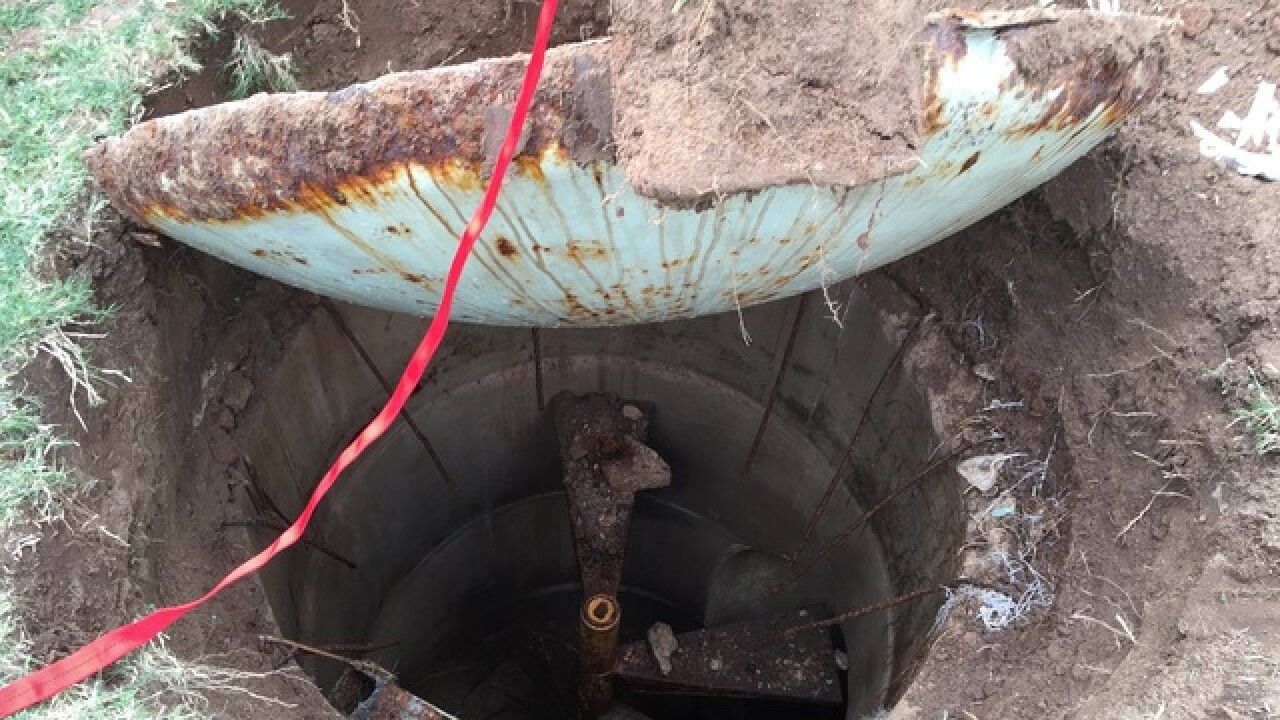 Americans were first introduced to the concept of fallout shelters decades ago.

In the early 1960's the fear of nuclear war drove some underground, but experts say it was much more than just fear.

"If you built a shelter you became the man with reason. The man who was protecting his family and doing his civic duty," said Yvonne Morris, the director of the Titan Missile Museum.

Today you may be able to dig up this chapter of American history, like John Sims did two years ago. He discovered a fallout shelter in the backyard of his Tucson home that was built in 1961.

"I kind of thought it might have been a real cheap job like a storm drain just thrown in to the yard with the little bit of the steps or something," Sims said. "But it turned out to be a lot cooler than that."

Decades before Sims uncovered his shelter, the possibility of nuclear war wasn't something that could be ignored. September 1961 was a "flashpoint" for Americans, Morris said, in terms of building personal fallout shelters.

Tensions had escalated between the U.S. and Soviet Union, Morris said.

"They [the Soviet Union] had announced plans to negotiate their own treaty with east Germany that could effectively cut off access to Berlin. That was not acceptable to the United States and it's NATO allies," Morris said.

It was around this same time an article about how to survive fallout was delivered to mailboxes across the country. Illustrated on the pages of Life Magazine in September 1961 were plans you could use to build your own shelter along with a letter from President John F. Kennedy.

"The security of our country and the peace of the world are the objectives of our policy," Kennedy wrote. "But in these dangerous days when both objectives are threatened we must prepare for all eventualities."

It wasn't the first time Americans were introduced to fallout shelters, and it wouldn't be the last. How-to guides and emergency supplies from the Cold War era are now on display in Sims' house.

The Rural/Metro Fire captain amassed a collection of civil defense artifacts after discovering his own artifact underground. He has cans of emergency water, food and first aid kids.

Sims bought the house from a friend who told him about the possibility of a shelter, but the previous owner wasn't completely sure because it wasn't visible.

"I got very interested and maybe about six to eight months after I moved in I started doing some test digs to see if I could find something," Sims said.

Sims hired someone with a metal detector and eventually found the hatch. Wanting to know more, Sims posted on a Tucson Reddit page "Anyone know of any residential Bomb/Fallout shelters?"

The post got hundreds of comments. Local newspaper articles were written about the find and the story spread to international publications like the Daily Mail. Sims said someone even sent him a link from a story in Japan.

Since then Sims has connected with other people in Tucson who have fallout shelters, and the biggest improvement he's made is construction of the entryway and rebuilding the staircase.

To learn more about the role Tucson played during the Cold War, KGUN9 visited Yvonne Morris at the Titan Missile Museum. She was a U.S. Air Force Officer in the 1980's and was part of the crew that would have launched the missile if ordered to do so.

"We existed to prevent World War III from ever happening. And in order to do that, you have to project a credible threat which means you have to demonstrate that your weapons systems exist and it will work under extreme circumstances," Morris said.

At 103 feet tall, the Titan Two could decimate an area of 900 square miles and was capable of launching within 58 seconds. There were 18 of them in operation around Tucson from 1963 to 1987.

Why was Tucson chosen to house 18 missiles? It's a complicated question, Morris said, and the actual selection criteria of the Titan Two sites remains classified.

There were 18 sites in Wichita, Kansas and in Little Rock, Arkansas, Morris said. Based on what those three locations have in common, there were a few factors that played a role including population and proximity to a U.S. Air Force Base.

Tucson of course has Davis-Monthan Air Force Base.

"It was an economic boon to the community so the Pima County Board of Supervisors, working with the federal Arizona delegation, actually lobbied for the placements of the sites in Tucson because they saw it as a benefit for the community," Morris said.

But not everyone agreed.

Several professors from the University of Arizona led a movement to try and stop it, Morris said. There was a philosophy that they didn't believe that nuclear weapons should exist to begin with, Morris said, but also it was more pragmatic.

"They were afraid this made Tucson a target and there is an element of truth to that," Morris said. "But the fact is Tucson was already a target because of the Boneyard at Davis-Monthan Air Force Base."

The mission of the Titan Two was peace through deterrence. Now though, the launch sequence is just a simulation and it has a new mission.

Once a top secret location, the Titan Two missile site is now a National Historic Landmark you can now tour and learn about it's part in the Cold War.

Fallout shelters were a way to shield your family from radioactive fallout, but remain relics of our past.

The shelter in Sims' backyard was built by Whitaker Pools and is about 12-feet in diameter.

Sims still isn't sure what he'll make of his shelter, but he is into electronics and robotics and thinks it may make a cool lab. He has gotten plenty of suggestions.

"A lot of people said I should turn it into a wine cellar or a cigar bar," Sims said. "I thought it would be cool to host some poker games down here. I think it would be a unique buy-in."

Morris says about 3% of the American population built their own fallout shelters. That could have been higher in Tucson because some feared the city was perhaps higher on the target list for the Soviet Union, Morris said.

Would they have actually worked? No one ever had to find out. The debate over how effective a personal fallout shelter would be is part of what contributed to the low turnout for people who actually did build them, Morris said.

They wouldn't withstand a direct hit, Morris said, and you have to have enough food, water and fresh air.

"What influenced a lot of people about whether or not to build a shelter is, 'OK well, if we're in all out war, with the Soviet Union, what kind of a world am I going to exit in a couple of weeks and is that a world I want to live in?'"

Whitney Clark is a reporter and news anchor for KGUN 9 On Your Side. She can be reached via email at whitney.clark@kgun9.com. Follow her on Facebook and Twitter @whitneyclarktv.