Look inside an abandoned Santa theme park in Brazil 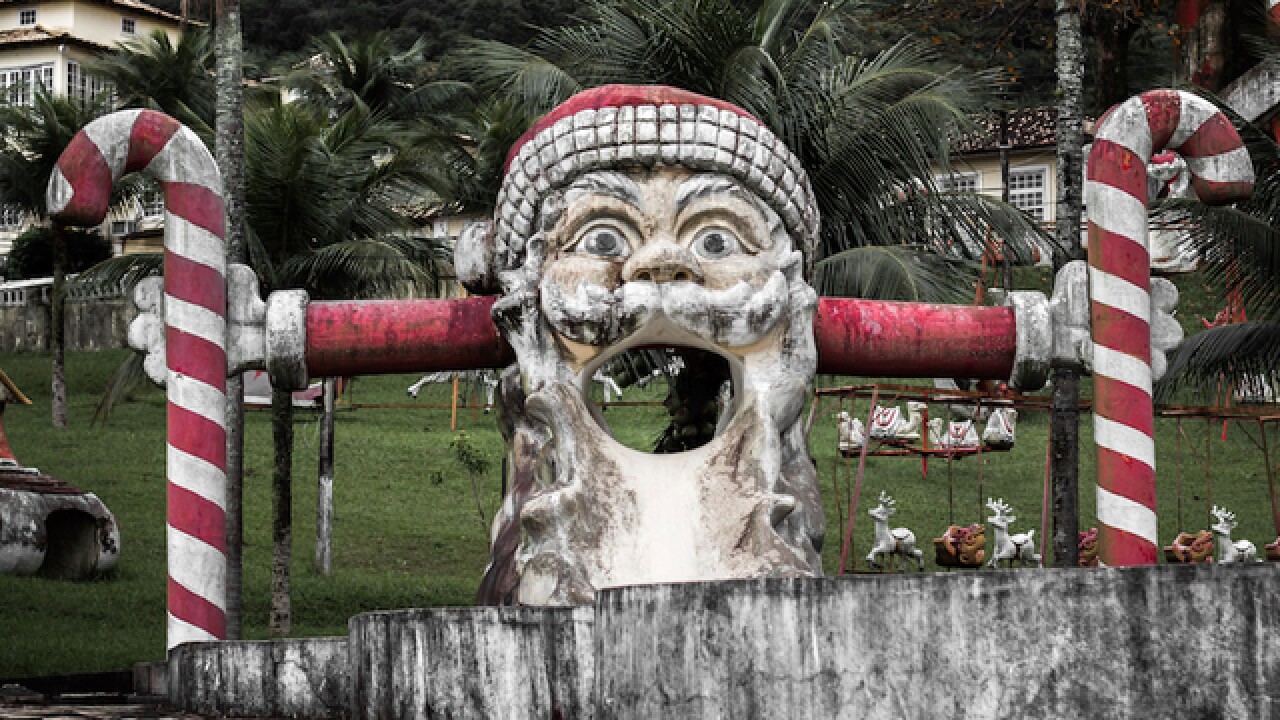 Driving through Brazil to Rio de Janeiro, you might spot an eerie sight on the side of the road: a derelict gang of Santas, lying abandoned surrounded by palm trees and greenery.

The park was the brainchild of politician Antonio Albano Reis, colloquially known as the "Santa Claus of Quintino" because he dressed as Santa each Christmas.

It was going to be a series of fun, themed-lands over an expansive area — more than 30 million square meters — but only the Santa area was completed.

Following Reis' sudden death in a road accident in 2004, Park Albanoel closed and fell into disrepair.

Several years later, British school teacher Christopher Jones was driving from Rio to Paraty with a group of friends when they spotted the spooky Santas.

Jones, a keen photographer, snapped a series of striking images capturing the park's foreboding atmosphere. He tells CNN Travel about the unnerving experience.

Climbing out of the car and edging closer, Jones and his friends were struck by what they saw.

"It's this huge compound, completely open to the road," Jones recalls. "I think there was a very small wall, about a foot, two foot high and it's just it's completely abandoned. There's some sort of big house or residence behind it, but the sort of lawn area at the front is just completely open."

See more photos of this park

Exploring the park was surreal, thanks to the juxtaposition between many people's regular associations with Christmas -- joy, new life, celebration -- and this macabre, ominous environment.

"[Christmas] is designed to be so happy, isn't it? And joyful," says Jones. "Yet these things are riddled with the cracks and mold."

"We were just fascinated by the whole thing."

The idyllic natural surroundings, Jones says, only added to the effect.

"The actual site it's got quite a steep sort of valley side behind it and there's actually a beautiful waterfall in the background as well -- because it was quite faraway it's hard to get it in the same shot."

Other elements of the park particularly stood out.

"The sort of Santa Claus in the -- it almost looks burnt out helicopter -- was a particularly surreal one," recalls Jones.

"If you go look at some of the structures and you peer through the doorways or the open windows, there's sort of smashed up Christmas statues and things inside them, which are particularly eerie," says Jones.

"It doesn't look like they've taken anything off site. Some bits have just crumbled to pieces and just been pushed inside."

The group were cautious about venturing too far into the park, not knowing what they'd find.

"We didn't want to get too far into the site, just in case," says Jones. "We stayed by the periphery, really, but who knows what else is in there?"

Back in the UK, Jones edited and posted the photographs on his Flickr page -- he desaturated the shots and boosted the red color to emphasize the eeriness.

Internationally, the park isn't as well known as other abandoned places around the world and the information available online is fairly limited -- as are the photos.

As a result, it's often Jones' pictures that pop up on social media. They've been shared by high profile figures on Twitter -- including Mexican movie director Guillermo del Toro.

"I think it's somewhere that not many people have actually know exists and have been in to actually photograph," says Jones.

"It's striking isn't it? It's just visually striking," he says.