The Tombstone Thunderbird. Legend or Lie?

Through history, many cultures have passed down legends. Legends are based on an element of truth, the rest is mythical and left up to your imagination.

"The most popular theory of the picture existing, the real picture, is a Pterodactyl-like creature spread out on a barn, wingspan about 18 feet and it had cowboys holding hands stretching their arms out depicting the actual size of the creature as it spread. However, this picture has never surfaced or been found.  Anything published will always be out there. So if it's still out there and hidden, it's one big great hide and seek."

So did it happen?

"Tombstone is probably the most famous one because of it's legend.  It's the story of the Thunderbird in Tombstone, Arizona. You put those two together and it becomes an anomaly. Through the years, many could have sworn they saw the picture in magazines. But that is not possible as the Tombstone Epitaph had no ability to publish pictures back then. The thing is if it hasn't been found yet with hundreds of people looking for something they remember, but they implant that memory and say I know I saw it."

The Library of Congress has the issue April 26, 1890, on file and it shows no photo.
However, the legend continues for a reason.
Hawley explains.

"You gotta remember the time that the article was written was you know late 1800s, mining was not a thing.  It was dying down. Tombstone was a dusty little town with very few people left, so having a good news article to write was more of a challenge."

In true Old West fashion, a cowboy came along.

"There is one strange thread to the story that leaves some plausibility to it.  It was back in the 1930s or 40s. They held their, it would have been their Helldorado celebrations. There was one old cowboy there and he decided to speak out basically. And he told reporters that he was one of the ranchers that shot at the creature, but they misled the story so badly, basically him and his friend chased the creature as it flew in the air, but the horses were getting spooked and turned around on them and they couldn't get it back to where they were chasing the creature and they were a little frightened too. They never shot it down.  They never killed it and it flew away. This legend will never end. It is a mystery such as the Lochness Monster is a mystery.  Big Foot is a mystery, as long as there's questions about it, it's going to last forever." 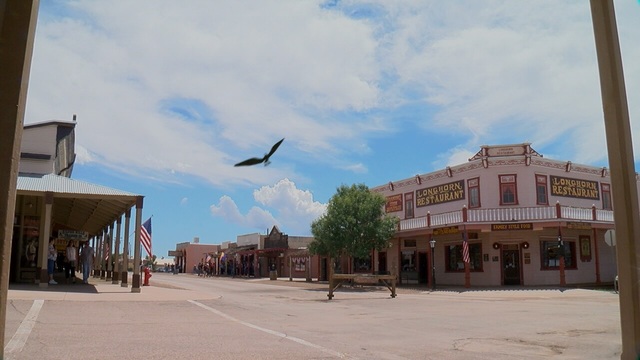 Thanks to Joshua Hawley for his contributions to this story.
Copyright 2016 Scripps Media, Inc. All rights reserved. This material may not be published, broadcast, rewritten, or redistributed.