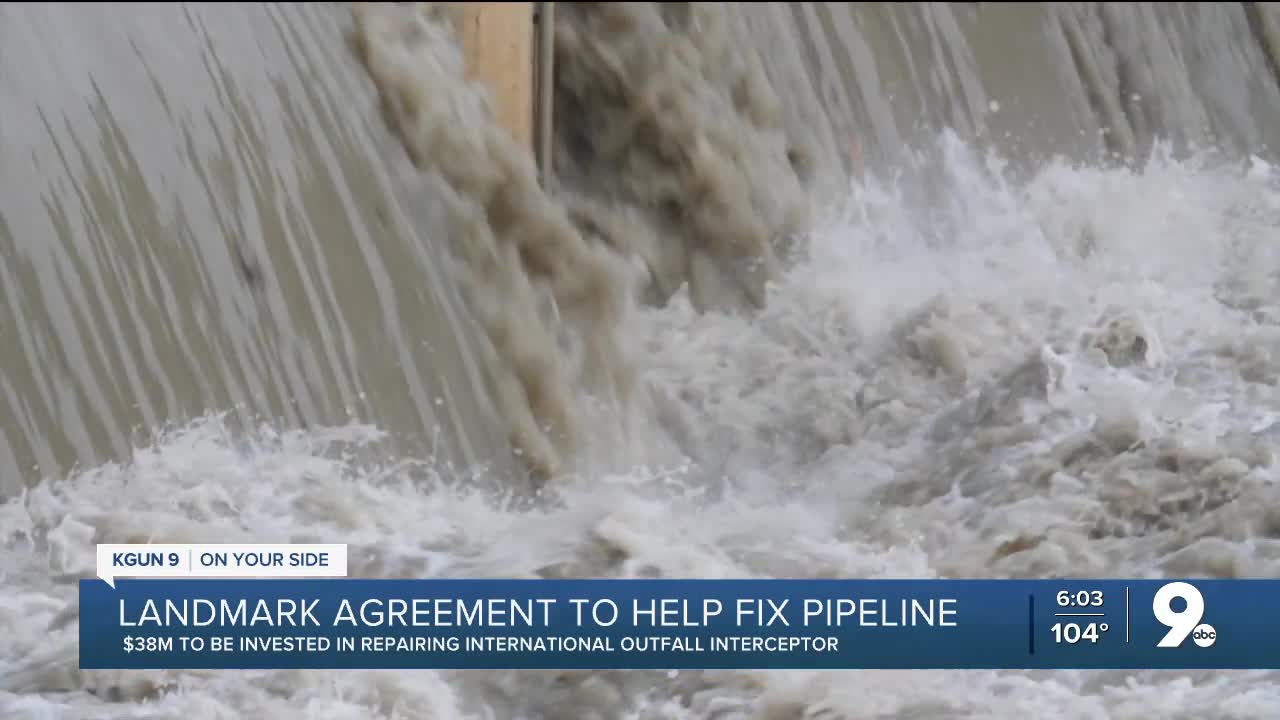 NOGALES, Ariz. -- A leaky pipeline that carries millions of gallons of sewage from Mexico and spills into the United States through Nogales, Arizona is one step closer to being repaired.

Every year, the Nogales wash floods during the monsoon, causing ruptures in the pipeline. Raw sewage can spill into the wash.

However, a landmark settlement that comes with a $38 million investment into the pipeline could fix that. It's an agreement between the Arizona Department of Environmental Quality (ADEQ) and the United States Section of the International Boundary and Water Commission (USIBWC)

Misael Cabrera is the Director of the Arizona Department of Environmental Quality. He says when the Nogales wash is running, it can create problems for a huge sewer pipe that carries millions of gallons of sewage from Mexico.

“Monsoon storms can create lots of problems for our infrastructure. In 2017 there was a catastrophic breach that allowed 600,000 gallons of raw wastewater to enter the Nogales wash and enter the Santa Cruz River for seven to eight days,” Cabrera said.

The line is called the International Outfall Interceptor, or IOI. It’s the result of a treaty with Mexico that dates back 76 years -- so the pipe is old and needs some work.

“Roughly $38 million -- and that money will fund the project which will line the inside of the existing pipe and protect the outside of the existing pipe in areas that are exposed. What this will do is avoid catastrophic ruptures like we had in 2017. It will eliminate leakage and benefit both the environment and the local residents,” the ADEQ Director added.

Miguel Rangel lives in Nogales and owns Mike's Auto Glass, which is located across the Nogales wash. He says it’s about time for permanent repairs.

“That’s great news because down the road right here you can see there’s broken areas right there that have just been patched up and it’s not the first time it happens. So we’re really thankful we’re getting this grant because it’s really needed,” said Rangel.

Rangel says in his 30 years owning the business, the sewage smell has only gotten worse.

“It’s not pleasant at all. When the heat rises, the smell rises here too. It’s unbearable,” he said.

As far as the timeline for repairs-- it should begin soon.

“According to USIBWC, they are looking to start construction maybe as soon as this summer or this fall,” said Cabrera.

However, the ADEQ Director says this is only the beginning.

“This is a big win for the state of Arizona," Cabrera said. "There’s more to do. We need to work collaboratively with our neighbors to the south and federal and local agencies to continue working on these infrastructure issues along the border.”

In the meantime, Rangel says this is a step in the right direction.

“Hopefully with this grant they do things the right way. They allocate the funds where they’re supposed to so that it will last us another 50 to 60 years,” he said.

Rule of thumb, if you can smell sewage, it’s there. Director Rangel encourages folks to stay away from the wash when an odor is present, to prevent e-coli contamination.