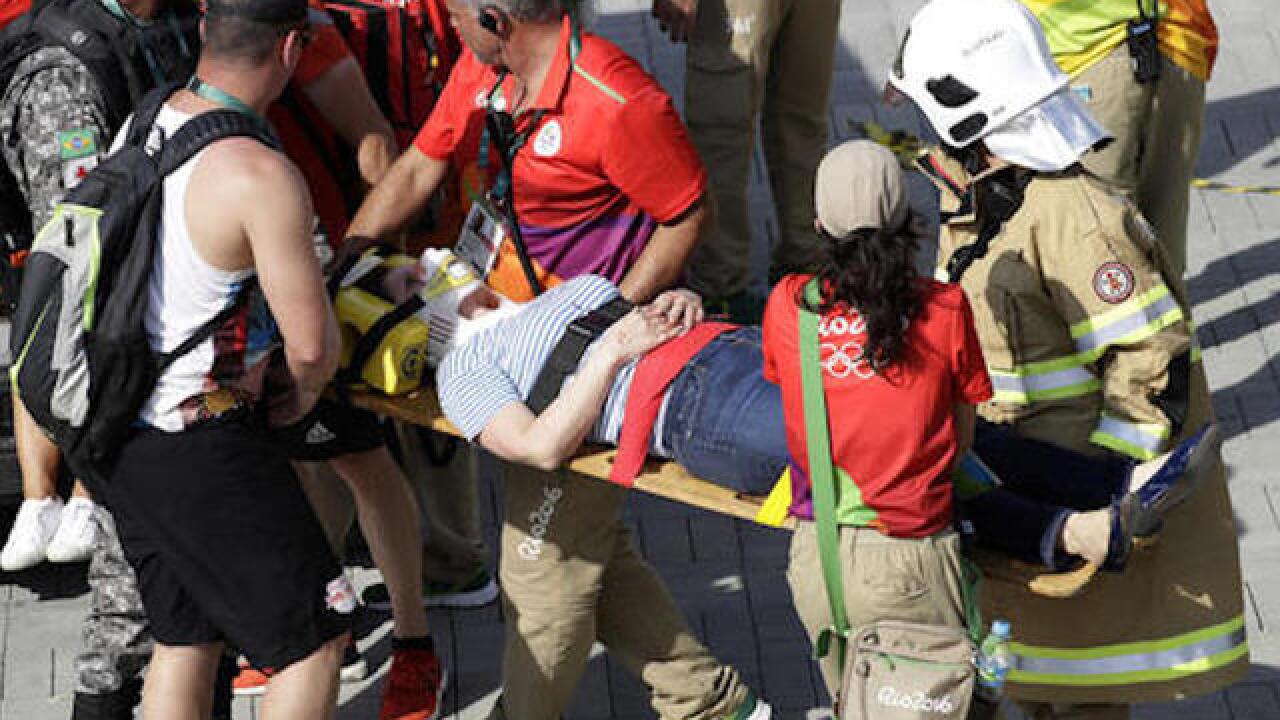 Copyright 2018 Scripps Media, Inc. All rights reserved. This material may not be published, broadcast, rewritten, or redistributed.
Robert F. Bukaty
A woman is taken away on a backboard after being struck by overhead camera that fell from the wires that suspended it over Olympic Park, Monday, Aug. 15, 2016, at the 2016 Summer Olympics in Rio de Janeiro, Brazil. (AP Photo/Robert F. Bukaty)

RIO DE JANEIRO (AP) — Seven people were injured Monday when an elevated television camera plummeted more than 60 feet to the ground Monday in the Olympic park outside the basketball venue in the latest in a string of mishaps at the Rio Games.

The large camera is one of several suspended on cables to provide aerial views of the main Olympic Park. The Olympic Broadcasting Service said two guide cables on its camera snapped, causing it to fall to a lower concourse that feeds into the basketball stadium.

Chris Adams, a gymnastics fan from Britain, said he heard a cable snap and then watched as the camera fell and hit two women.

"It looked like a flying saucer coming through the air when it hit these two women," Adams said. "This thing is big, and it shot through the air. It came down at such a speed that they wouldn't see it. They weren't expecting it."

The severity of the injuries was not immediately clear. Rio Games organizers said at least one woman was taken to a hospital. The Olympic Broadcasting Service said medical officials on the scene described the injuries as "minor," and it has launched a full investigation into the incident.

Adams said he saw both women were conscious and that medical personnel quickly arrived to take them away on stretchers.

It's the latest in a series of problems that have plagued the Rio Games, including and Olympic security officer being fatally shot after taking a wrong turn into a slum, robberies of a group of American swimmers including Ryan Lochte and two Australian rowing coaches and stray bullets twice landing in the equestrian venue at the Olympic complex.

Authorities quickly set up barricades around the area where the camera crashed and shattered glass littered the area.

"There was quite a lot of screaming and a bit of commotion," Adams said. "People were running to the situation to make sure these two ladies were OK."

Olympic Broadcasting Service officials said they had a cherry picker in transit to help workers examine some sort of problem with the camera before the incident, but it did not arrive in time. The camera moves along the park on wires suspended high above the ground.

Olympic Broadcasting Service has operated cameras in Olympic parks and arenas since 2001.