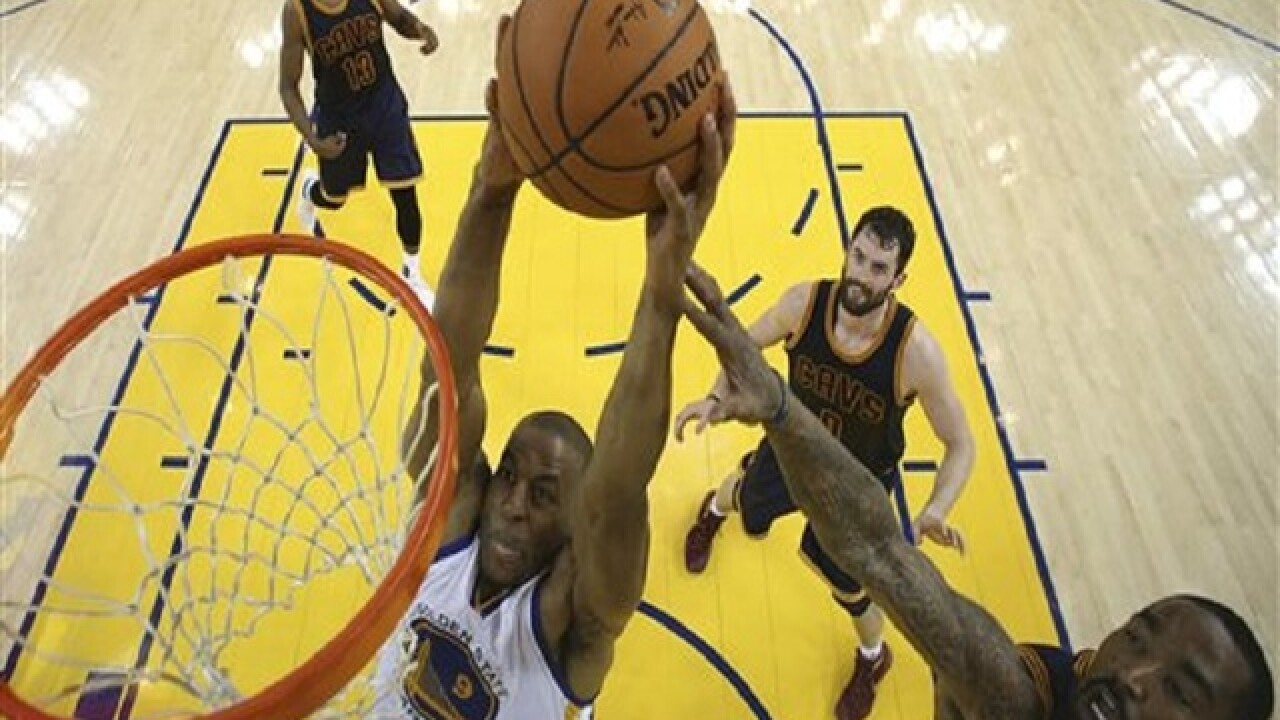 Stephen Curry dribbled every which way and beat LeBron James to the rim in a move reminiscent of his recent MVP magic, and the Golden State Warriors grabbed a 2-0 lead in the NBA Finals by downing the Cleveland Cavaliers 132-113 Sunday night in coach Steve Kerr's return to the sideline after a six-week absence.

Their leader and reigning NBA Coach of the Year back on the bench at last, Curry and Kevin Durant tag-teamed the Warriors within two victories of another championship. Curry recorded his first career postseason triple-double with 32 points, 11 assists and 10 rebounds, while Durant contributed 33 points, 13 rebounds and six assists while moving two wins from his first ring.

"He's been around, the last couple weeks especially, giving us input and giving us what he's got," Curry said of Kerr. "But having him back on the bench means a lot. We love his presence. We love his voice. And we're a full group when he's out here. So that means a lot."

Golden State improved to 14-0 this postseason to keep alive a chance of becoming the first group to go unbeaten all the way to a title.

James was equally spectacular with his own triple-double of 29 points, 14 assists and 11 rebounds, but yet again didn't get nearly enough help to keep up with Golden State's depth despite Kevin Love's 27 points and 19 from Kyrie Irving.

Klay Thompson emerged from a postseason-long shooting funk to score 22 points with four 3-pointers while playing more stellar defense and pulling down seven rebounds for the Warriors, who shot 18 for 43 from deep.

"We turned the ball over too much in the first half. But the second half, I think we settled in, tried to play simple and defensively just tried to contest their shots," Durant said.

The best-of-seven series now shifts to Cleveland for two games, with Game 3 Wednesday.

Kerr returned to the bench to a rousing ovation, waving to the fans while back on the sideline for the first time since Game 2 of the first round against Portland on April 19 because of pain issues stemming from complications after 2015 back surgery.

"I'm going to pull out the 'Win one for the Gipper' speech," Kerr joked. "'Knute Rockne, All-American?' Yeah, probably show that. Maybe get a little teary-eyed. Implore them to win it for me because it's not important for them to win it for themselves."

Curry provided the coach more than a glimpse of his greatness from up close after Kerr had been watching games from the locker room while speaking to his players beforehand and at halftime.

He ran circles around James during one masterfully skillful sequence, then drove left through the paint for a right-handed layup over the star's outstretched arm during a signature moment in another rout. James had little help as Love got there late.

Curry wore his emotions for everybody to see, willing the unblemished Warriors even when Cleveland went on a third-quarter run after that play.

Durant scored from every corner of the court. An off-balance KD flicked the ball up while falling backward and being fouled by Love and got a lucky bounce for a three-point play 7:04 before halftime just after Love had hit a 3 on the other end.

Now, Golden State is headed to Northeast Ohio needing just two more - yet don't count on anybody considering this series close to done. The Warriors squandered a 3-1 lead to the Cavs a year ago to miss a repeat.

Curry made all 14 of his free throws. He and Durant combined for 66 points and 18 assists in the opener, then dominated again while the supporting cast shined. Draymond Green had 12 points, six rebounds and six assists playing all game in foul trouble and Shaun Livingston scored 10 off the bench.

This time, Curry committed eight turnovers as Cleveland committed to putting more pressure on the ball to keep Durant from driving and dunking untouched as he did so many times in Game 1.

It didn't matter in the end.

Cavaliers: Tristan Thompson scored his first points of the series on a driving dunk midway through the first quarter. ... Cleveland shot 3 of 20 on 3s in the first half and 8 for 29 total. ... James has won a road game in 29 straight postseason series, so his Cavs must force a Game 5 back in Oakland to keep it going.

Warriors: The Warriors had their first 40-point quarter in the Finals since scoring 41 in the first quarter of Game 6 in 1967 against the 76ers. ... Curry's 10 first-quarter free throws matched a playoff record for made shots from the stripe in one period shared with Sarunas Marciulionis, done on April 28, 1992, at Seattle. It also matched Paul Pierce for most in a Finals quarter. ... Thompson played in his 78th postseason game to pass Jeff Mullins for most in franchise history. ... Golden State equaled its four turnovers from Game 1 in the initial 5:12.