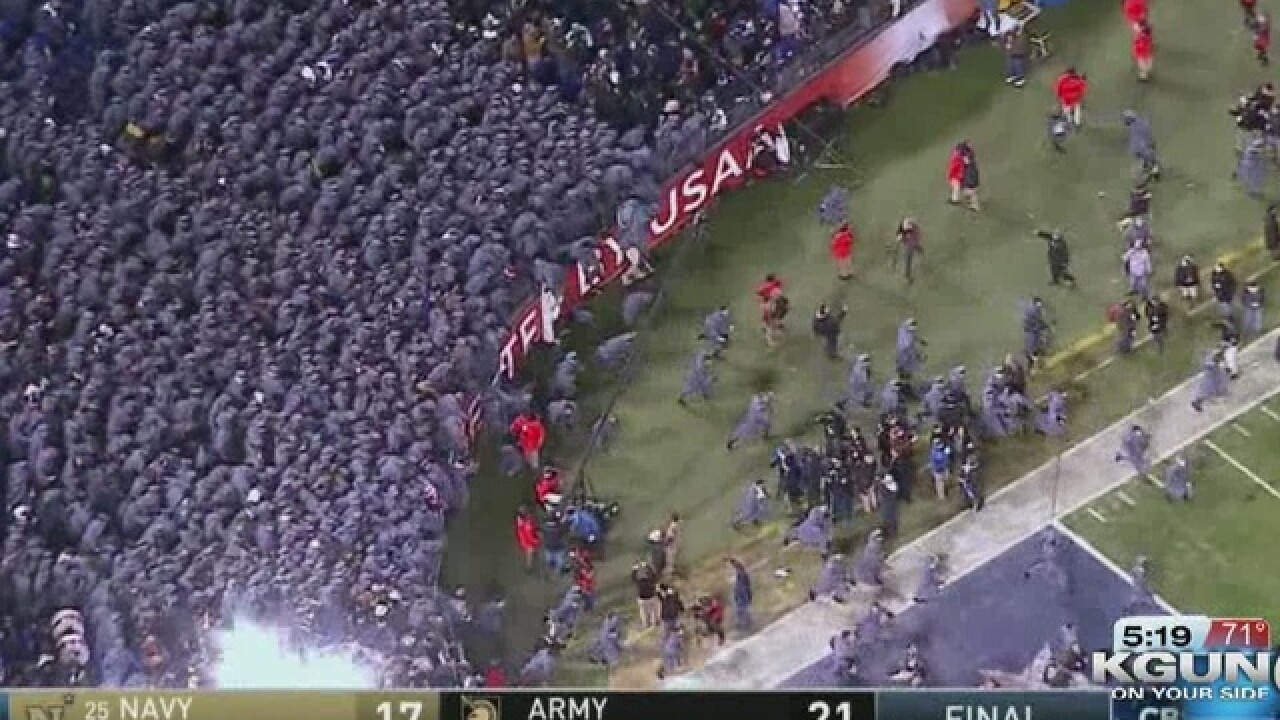 By: The Associated Press
Posted at 5:52 PM, Dec 10, 2016
Army ended a 14-year run of frustration against Navy, using an overpowering running game and opportunistic defense to carve out a long overdue 21-17 victory Saturday.
With future commander in chief Donald Trump looking on, the Black Knights blew a 14-point lead before quarterback Ahmad Bradshaw scored on a 9-yard run with 6:42 left to give Army the win it had been waiting for since 2001.
The Black Knights' 14-game losing streak was the longest by either academy in a series that began in 1890. Army (7-5) now trails 60-50-7 in one of the nation's historic rivalries.
Navy (9-4) was coming off a physical 34-10 loss to Temple in the American Athletic Conference title game and had only one week to prepare for Army with a new quarterback, sophomore Zach Abey, who was making his first college start. Abey took over Will Worth, who broke his foot against Temple.
Abey ran for two touchdowns but passed for only 89 yards and was intercepted twice. Navy had four turnovers, three in the first half.
By halftime, Army led 14-0 and owned a 14-1 advantage in first downs.
After watching from the Navy side of the field before halftime, Trump visited the TV booth on the Army side in the third quarter. The interview with the president-elect coincided with a big shift in momentum.
Andy Davidson lost a fumble on the Black Knights' first possession of the second half and the Midshipmen recovered at the Army 32. A screen pass for 16 yards set up a 1-yard touchdown run by Abey to get Navy to 14-7.
Minutes later, the Midshipmen got a field goal after a replay overturned a lost fumble by Abey at the Army 11.
A 41-yard touchdown run by Abey gave Navy the lead with 12:42 remaining. But Army wasn't done.
The Black Knights put together a 12-play, 80-yard drive that lasted nearly seven minutes and ended with Bradshaw's TD with 6:42 remaining.
Bradshaw went 2 for 4 for 35 yards and an interception in Army's first win in Baltimore since 1944.
Davidson ran for 87 yards and two first-half scores, and Kell Walker carried 16 times for 94 yards.
FAREWELL VERNE
This was the final game in the broadcasting career of 76-year-old Verne Lundquist. He was cheered by the crowd during a live shot on the scoreboard.
THE TAKEAWAY
Army: The Black Knights appear to be on the upswing under third-year coach Jeff Monken. They're headed to a bowl game and now have a victory over Navy to celebrate.
Navy: The Midshipmen are staggering to the end of the season after a 9-2 start. The loss to Temple was tough to take, but this was much, much worse.
UP NEXT
Army: The Black Knights meet North Texas in the Heart of Dallas Bowl, Army's first postseason action since 2010.
Navy: The Midshipmen face Louisiana Tech in the Armed Forces Bowl on Dec. 23. It will be Navy's 13th bowl appearance in the last 14 years.
Copyright 2016 Scripps Media, Inc. All rights reserved. This material may not be published, broadcast, rewritten, or redistributed.