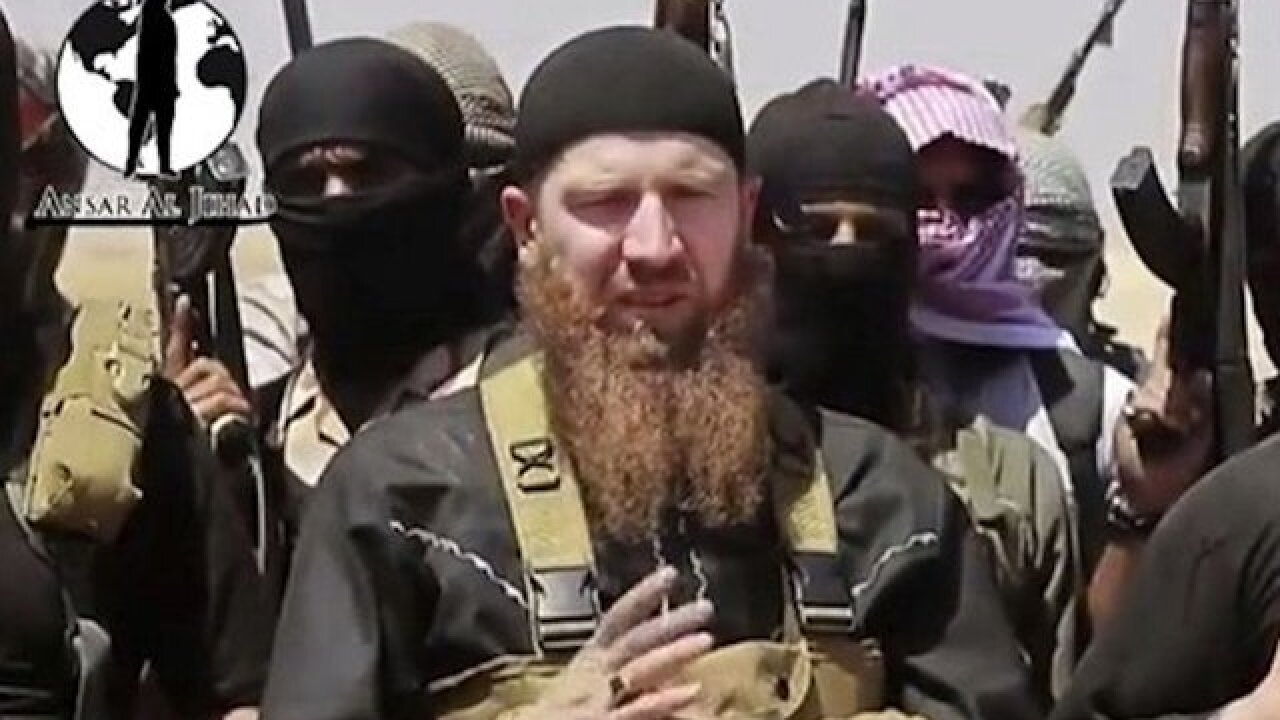 Al-Shishani, who was wounded in a U.S. airstrike earlier this month, died on Monday outside the Islamic State group's main stronghold of Raqqa in Syria, the two told The Associated Press.

There was no immediate confirmation of his death from the Islamic State group but the IS-affiliated Aamaq news agency denied he was killed, saying that the "he was not subjected to any injury." The outlet quoted an unnamed "source" for the denial, without giving further details or evidence that al-Shishani was still alive.

An American spokesman for the U.S.-led coalition battling the Islamic State group in Iraq said the alliance was also confirming the militant commander had died.

The red-bearded ethnic Chechen was one of the most prominent IS commanders, who earlier served as the group's military commander for the territory it controls in Syria. He later became the commander of the group's ground forces, according to Hisham al-Hashimi, an Iraqi scholar and author who closely follows the group.

According to Rami Abdurrahman, of the Britain-based Syrian Observatory for Human Rights which tracks the Syrian conflict through a network of activists on the ground, after al-Shishani was wounded, IS "brought a number of doctors to treat him, but they were not able to."

Abdurrahman said al-Shishani died in a hospital in the eastern suburbs of Raqqa. The Iraqi intelligence official, who spoke on condition of anonymity as he was not authorized to talk to the media, said the IS commander was buried in Deir el-Zour on Tuesday.

Al-Shishani, whose real name is Tarkhan Batirashvili, was an ethnic Chechen from the Caucasus nation of Georgia, specifically from the Pankisi Valley, a center of Georgia's Chechen community and once a stronghold for militants.

A U.S. airstrike targeted al-Shishani on March 4 near the town of Shaddadeh in Syria, Pentagon Press Secretary Peter Cook told reporters in a statement last week.

Al-Shishani "had been sent to Shaddadeh to bolster ISIL fighters following a series of strategic defeats," Cook said in the statement, using an alternative acronym for the Islamic State group.

The spokesman for the U.S.-led coalition, U.S. Army Col. Steve Warren said on Tuesday that the coalition was able to "assess that he is dead" and that it "got the word Monday morning."

Warren described al-Shishani as a "very important figure," in the Islamic State group, who was hit as part of a stepped-up campaign of U.S.-led airstrikes targeting IS leadership.

Last week, Waren told reporters that the airstrike that targeted al-Shishani was part of a series of stepped-up coalition strikes targeting IS leadership.

Al-Shishani was in the area of Shaddadeh "along with about a dozen other fighters who were in one spot ... and we struck it," Warren said at the time.

The extremist IS group, which emerged from al-Qaida's branch in Iraq, has many Iraqis among its top leaders. It blitzes across much of Iraq in the summer of 2014, capturing vast swaths of the country's north and west. It also exploited the chaos of Syria's civil war to seize large chunks of territory there as well and declared an Islamic self-styled "caliphate" on the territory it controls in both countries.

It subsequently drew hundreds of foreign fighters into its operations in Syria. The United Nations estimated that around 30,000 so-called foreign fighters from 100 countries are actively working with the Islamic State, al-Qaida or other extremist groups. An earlier estimate by the International Center for the Study of Radicalization, a think tank at King's College London, said IS fighters include 3,300 Western Europeans and 100 or so Americans.

Yet despite the U.S.-led campaign of coalition airstrikes in both Iraq and Syria, IS still controls large areas, including Iraq's second largest city of Mosul and also Raqqa, the group's main stronghold in Syria.