Battling the Bighorn Fire from above with DC-10 tankers 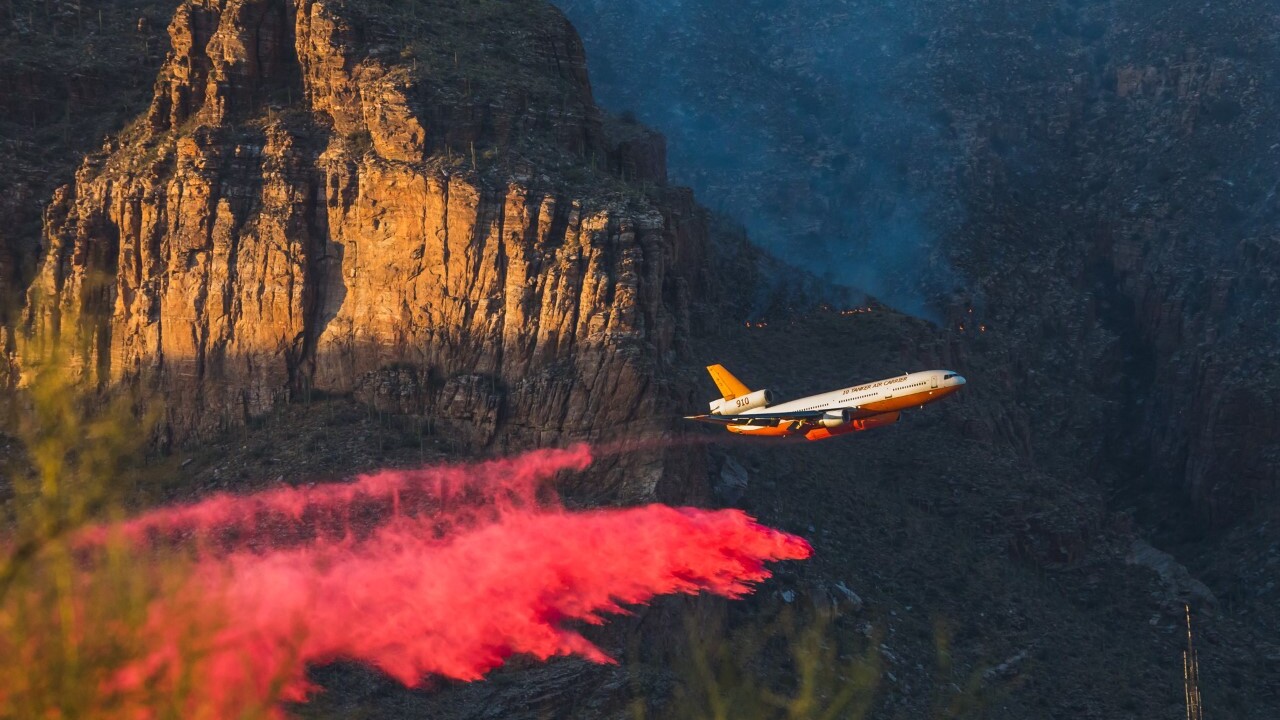 TUCSON, Ariz. — They are the most visible piece of the firefighting effort, the DC-10 tankers. Nearly every day you'll see them flying near the Bighorn Fire dropping the red fire retardant.

Dan Montelli is a pilot who has flown the most missions above Tucson for the last two weeks. He praises the ability of the wide-body aircraft.

"The DC-10 is a tank," Montelli told KGUN 9. "It's a heavily built airplane. For our mission, what we do, it's a phenomenal airplane."

This is Montelli's twelfth fire season flying for 10 Tanker, the Albuquerque-based company contracted by the U.S. Forest Service. They drop retardant on wildfires 9,400 gallons at a time.

Montelli has been on the Bighorn Fire since June 6, the day after it sparked. He describes the well-coordinated effort in the air above the Catalina Mountains.

"When I show up on scene, I'm only there a real short time to make a drop and get back to get another load," he said. "I talk to my lead airplane pilot. He basically tells me where the drops going to go, how it's going to go in, what cover trouble is, how thick the vegetation is on the ground. So we're able to make our drop. For my job, it's pretty easy."

It doesn't look that easy, it actually looks dangerous. But it helps that Montelli knows the area. He was based at Davis-Monthan Air Force Base in the 1990s. He flew the KC-10, the military version of the DC-10.

"I used to go to Mt. Lemmon all the time just to go hiking and hang out up there. It's beautiful," Montelli said.

Montelli saw the rugged beauty from his DC-10, just before a pass last week in the Catalina Foothills.

"We were going into town, so some of the drops were pretty steep," he said. "It was some sporty flying."

That sporty flying is necessary to get the retardant right where it is needed. Even if it means dropping it between two ridges.

"If I were to stay level, the retardant would kind of go down and blow away. Not even make it to the ground. So I've got to try to get the airplane in position where it's between [200] to 300 feet off the ground. You're so focused on everything trying to get the retardant exactly where it needs to go. You're trying to slow the fire down to where the troops can get in, the boots on the ground can get in and put the fire out."

Montelli describes the coordinated efforts of fighting the Bighorn Fire as just like being in the military.

"Troops on the ground," he said. "There's a couple of other planes up there flying that all have a specific job to do. It's the air attack, it's the leads. So we're just part of a big team that's trying to get in there and contain this fire."

Montelli says they have dropped over 160,000 gallons of retardant on the Bighorn Fire so far.