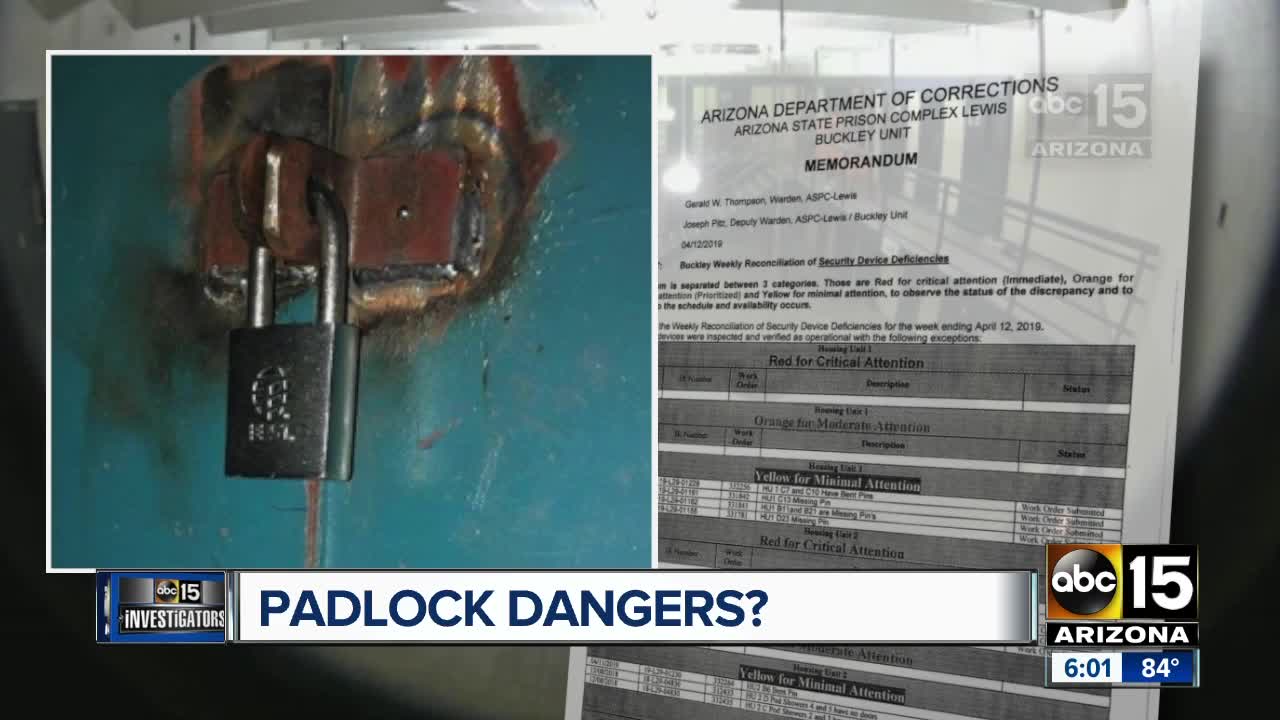 Over the weekend, the Arizona Department of Corrections installed hundreds of padlocks on cell doors in Buckeye’s Lewis Prison, which raised fire and safety concerns from inmates’ families, correctional officers, and advocates.

The rush to padlock cell doors inside three units of Lewis Prison started the day after an ABC15 investigation exposed how many doors do not lock, leading to ambush assaults on officers and at least one inmate’s death.

“I think it’s a desperation move. I think they want to show they are doing something,” said Donna Leone Hamm, director of Middleground Prison Reform. “But it’s a cockamamie idea on any level. It has a Rube Goldberg mentality to it. It’s just so dangerous. How could they ever every justify in an emergency evacuating 100 or 300 inmates in a very quick amount of time by unlocking individual padlocks? It’s a no-brainer that it is a blueprint for disaster.”

Prison officials said there will be 1,000 cells padlocked in the Morey, Rast, and Buckley units.

But in a statement, a corrections spokesman said the agency is treating this issue with the highest urgency, and the padlocks are a temporary fix, and they’re assessing long-term solutions.

The statement also said the prison staff has been working closely with the State Fire Marshal to ensure that emergency evacuation procedures are adequate and in compliance with all applicable rules, regulations, and laws.

The State Fire Marshal’s Office returned a request for documentation of any approvals related to the padlocks on Monday; stating that Acting Assistant Director, Josiah Brant, spent the day at the facility to assess the situation.

In a letter to Director Ryan, Brant wrote that he wasn’t consulted until Monday and the padlocking violates fire codes. However, the office is willing to temporarily accept the “not ideal” action if several measures were put into place over the week.

The addition of hundreds of padlocks is also worrying inmates, their families, and officers for another reason: they can be used as weapons.

It’s known as “lock in a sock,” and it’s how famous mob boss Whitey Bulger was murdered in federal prison last year.

Lewis Prison security inspection logs obtained by ABC15 show that several padlocks installed on some cells before ABC15’s investigation have gone missing. The records also show that dozens of 8-inch metal pins that were being used by the prison to secure the doors are also unaccounted for.

“Those are weapons, lethal weapons,” Leone Hamm said. “It’s just a matter of time (before someone gets killed). It’s going to happen.”

Sources told ABC15 that multiple high-risk inmates had been found with sharpened pins in the cells.

Many inmates inside Lewis Prison have a level four classification. On a one-to-five scale, that’s the inmate's risk and danger level.

In December, a Lewis inmate held the librarian hostage with a makeshift knife.

“Ensuring the safety and security of our employees and inmates must be the agency’s first and highest priority,” according to the department’s statement Monday. “As we’ve stated, inmates having the ability to open their cell from inside is unacceptable for both our officers and other inmates. It is not and cannot be tolerated.”