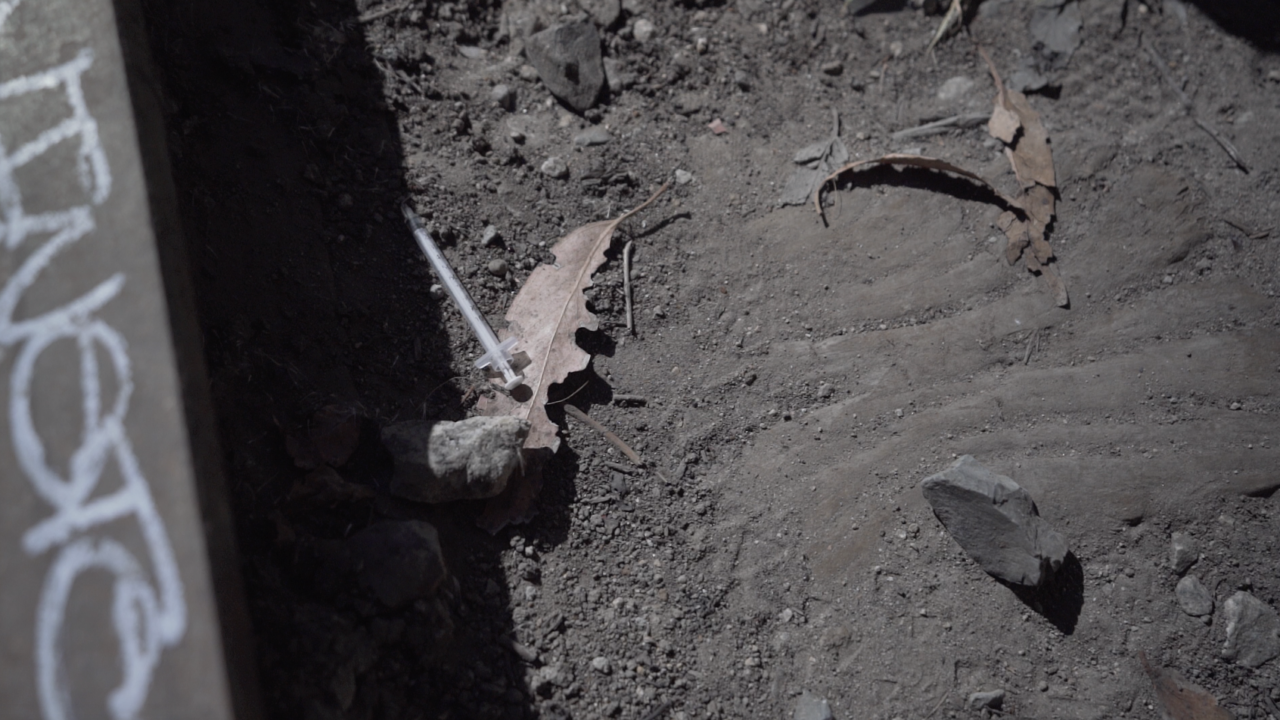 Damon Bruder walks the trail behind his home often, and for one purpose: to pick up used drug needles.

“It’s a living amends. It’s a way to give back to my community,” Bruder said. “This is dope fiends highway.”

Bruder lives in Santa Cruz, California. The popular vacation spot and beach town has a problem. People use syringes for drugs and discard them. They end up on sidewalks, in parks, on beaches, and on this rail trail near the mouth of the San Lorenzo River.

“These have all been picked up along this quarter mile stretch of train tracks,” Bruder said.

Since January 1st, he’s collected 92 needles in an old M&M's plastic container. Five of those were found on our short walk with him down the train tracks. He said this has been a good year.

Bruder is no stranger to needles. “There was a little over eight years straight, that I was homeless and addicted on the streets of Santa Cruz,” he said.

Now, he’s been clean for more than a decade.

“When you’re living on the streets, life is fear,” Bruder said. “Afraid of the police, afraid of getting caught, afraid of not having a fresh pair of socks.”

“The reason that we have so many needles on the ground is because there’s no accountability for the addict to take their needles back,” he said.

“My solution is to get as many of those things off the ground,” Sharon DeJong said. She was a former drug user herself, and now volunteers with a number of clean up groups.

“I myself have gotten 300 needles in five years off the ground,” she said. When she does pick them up, she brings gloves and a sharps container to put the materials in.

Nearby on the beach, Jason Book was playing volleyball on his lunch break. “A city worker just found an opioid needle here, right about five minutes ago,” he said. “It’s a public health crisis in my opinion. This is a recreational beach that has thousands and thousands of people crossing over it.”

“Needles and everything will get washed down the river, and it all comes right out there,” Santa Cruz resident Josh King said, pointing to where the beach shores meet the mouth of the San Lorenzo River.

“Santa Cruz is amazing. We’re in paradise right, but paradise has its dark side, and the dark side is we have an epidemic here,” Nancy Holmes, a mother of four, explained. Holmes’ daughter Ruby was stuck by a needle near a swimming hole.

“We went right to the doctor,” she said. “You hear the stories. Then when it actually happens to you, you’re like ‘oh my gosh it really is out there’.”

Discarded needles have been found in public places across the United States. There are no federal regulations for getting rid of them. So local governments have stepped in.

Most states have cities with syringe exchange programs, or syringe kiosks for disposal. Santa Cruz has two, with more on the way. One more kiosk is in the neighboring town of Watsonville.

“They should legalize it, 100 percent legalize it,” King said. “Give people a safe place to shoot up that’s clean.”

Lauri Watkins, a mother in Seattle, decided to help create awareness for the public by making materials to help inform children and adults. Her resources on how to spot and handle needles have been used nationally.

But the people in the Santa Cruz community say not enough is being done.

“We need more treatment centers,” DeJong said. “Right now, it is all the local people that live here that are really working to make it a better place,” Holmes said.

But the potential risks haven’t stopped DeJong from walking barefoot on the beach, or Holmes from letting her kids live their lives.