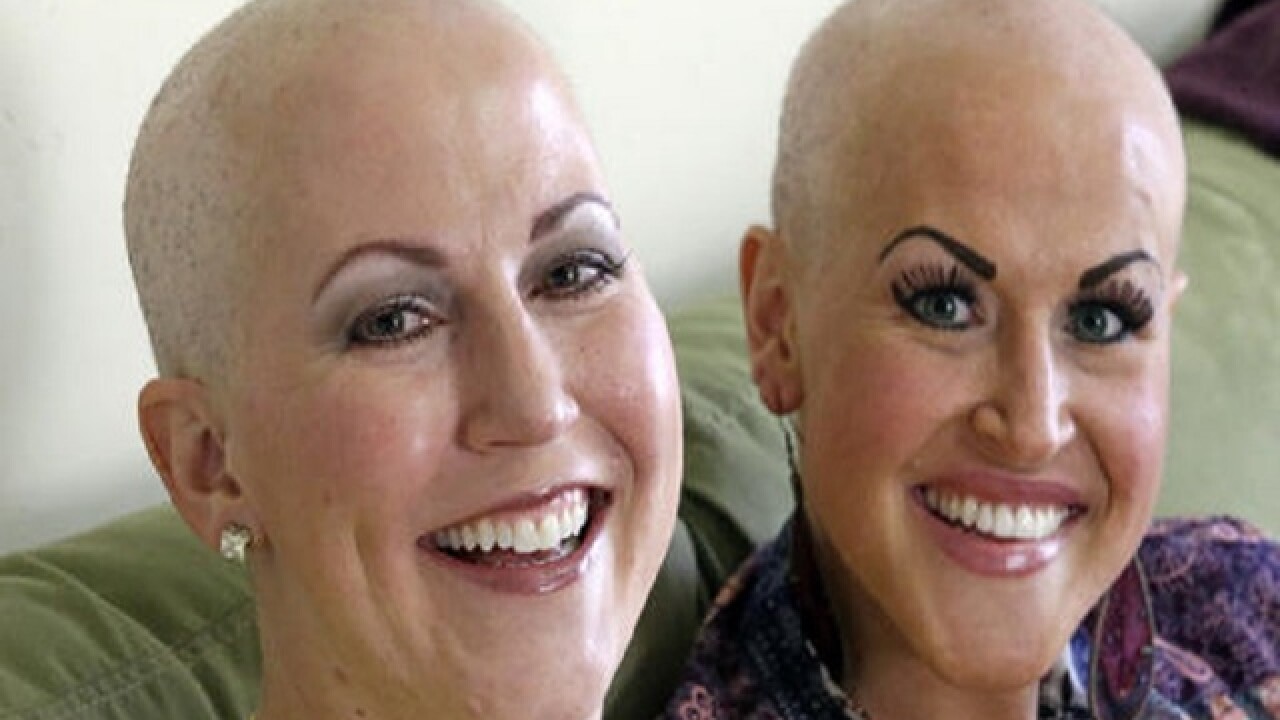 Rick Bowmer
<p>In this Thursday, May 26, 2016, photo, Annette Page, left, and her sister Sharee Page, pose for a photograph at Sharee's home during an interview, in Farmington, Utah. The two Utah sisters have received a breast cancer diagnosis within about two weeks of one another, a coincidence that doctors say is extremely rare, but gives them the chance to undergo chemotherapy together, shave each other's heads and discuss their identical symptoms. (AP Photo/Rick Bowmer)</p>

SALT LAKE CITY (AP) — Two Utah sisters grew up in the same bedroom, went to the same college, worked for almost a decade at the same company and have visited over 50 countries side by side. Now every three weeks, they sit together in matching chairs and chat as their bodies are pumped full of chemotherapy drugs.
Sharee Page, 34, and Annette Page, 36, were recently diagnosed with breast cancer within about two weeks of each other, a coincidence that doctors say is extremely rare. But that coincidence has meant they can face the disease like they have nearly every other aspect of their lives— as a team.
"Wow, talk about a huge blessing," said Annette Page, who lives five minutes from her sister in northern Utah. "Who gets to go through something so hard with their best friend, their sister?"
The "Page Sisters," as some of their friends like to call them, found out soon after their diagnosis that they have the BRCA2 gene, a mutation that puts a woman at a much greater risk for breast and ovarian cancers. BRCA mutations, which stands for breast cancer susceptibility gene, are most commonly found in women of Ashkenazi Jewish descent, although some northern European populations also have a higher risk of inheriting one of the mutated genes.
Adam Cohen, a doctor at the University of Utah's Huntsman Cancer Institute, said the gene can increase the risk of breast cancer tenfold. But Cohen said he has never seen two siblings diagnosed within weeks of one another.
"It's not uncommon to have somebody with breast cancer and BRCA2 mutation and whose sibling develops breast cancer," he said. "But doing it within two weeks is certainly very uncommon."
In late March, after discovering a large lump in her left breast, Annette Page was diagnosed with Stage 3 breast cancer. The news prompted Sharee Page to get herself checked, and the same doctor soon diagnosed her with Stage 2 breast cancer.
"Had she not been diagnosed, I don't think I would have caught mine for six months to a year," Sharee Page said.
Every few weeks, the sisters meet at their mother's house so that she can drive them to their chemotherapy appointment at Davis Hospital. After the six-hour session, they experience a myriad of matching chemo side effects, including nausea, bloody noses, neuropathy and headaches.
Their bodies react to the medicine in a nearly synchronized fashion. Both are unable to eat food for almost two weeks. Exactly 10 days after treatment, they break out in a rash.
"It's nice to know that someone knows exactly what you're going through," Sharee Page said.
The women, who are part of a devout Mormon family, have four other siblings. One of their sisters also recently tested positive for the BRCA2 gene. But she does not have cancer, so she plans to get a double-mastectomy.
Cohen said that course of preventative treatment is sometimes recommended for someone who has the mutation and is cancer free. Actress Angelina Jolie, for instance, had a double mastectomy and her ovaries removed after testing showed she carried a similar mutation.
The family has a long history with breast cancer, as the sisters' grandmother and great-grandmother both died of the disease.
The siblings' mother, Susan Page, is a survivor of throat and mouth cancer who also has the BRCA2 gene. She said she cried for days after she found out that two of her children had cancer.
"You spend your whole life, even before they're born, trying to protect them and make sure they're safe and try to keep them healthy," she said. "And then something like this happens."
The sisters now go to the same doctor for joint appointments, and they help each other get through the especially difficult days. When Sharee Page's hair started falling out soon after she started chemo, Annette Page shaved it all off for her.
But their nearly identical treatment plans may soon deviate. Annette Page's cancer has spread to her lymph nodes, so unlike her sister, she will have to undergo radiation therapy next.
Copyright 2016 The Associated Press. All rights reserved. This material may not be published, broadcast, rewritten or redistributed.