One case of coronavirus confirmed in Maricopa County, ADHS says
KGUN 9 On Your SideNews 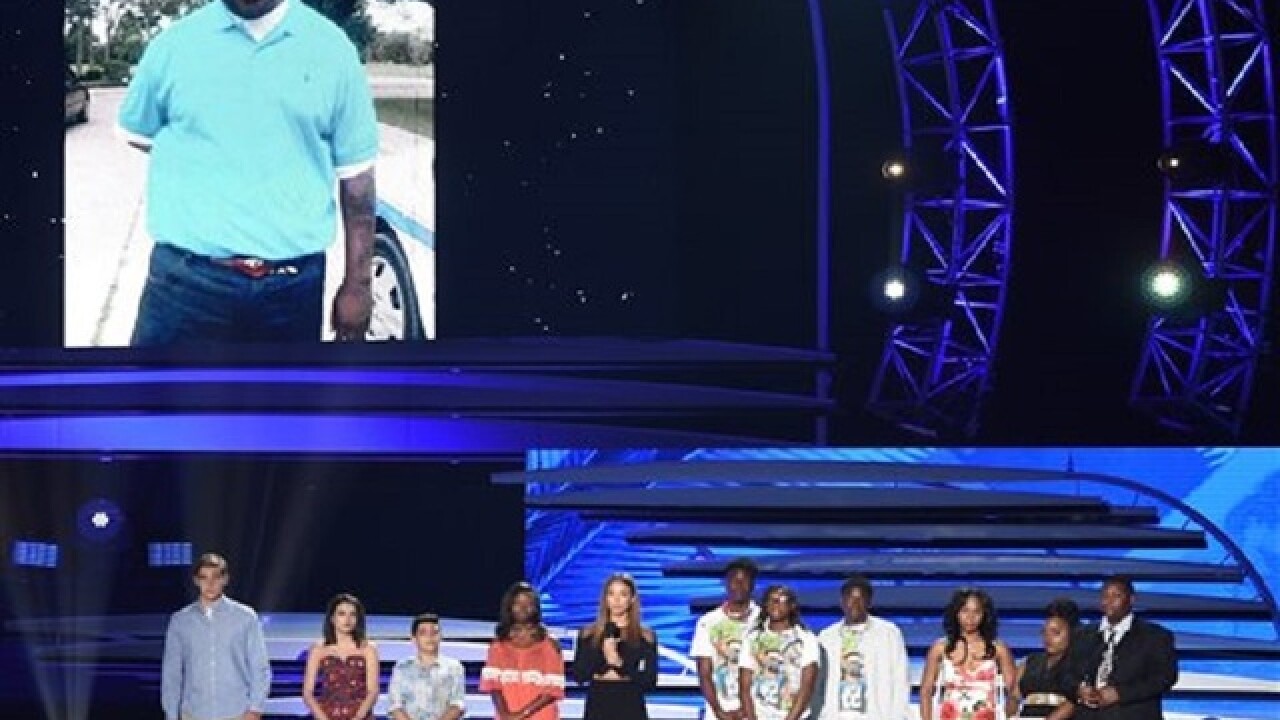 Chris Pizzello
<p>Jessica Alba, with families of victims of gun violence, speaks while a picture of Alton Sterling appears on screen at the Teen Choice Awards at the Forum on Sunday, July 31, 2016, in Inglewood, Calif. (Photo by Chris Pizzello/Invision/AP)</p>

LOS ANGELES (AP) — The rowdy revelry of the Teen Choice Awards momentarily took on a somber tone Sunday when Jessica Alba, Ne-Yo and a group of teenagers called for an end to gun violence.
The actress was joined on stage at the fan-favorite ceremony by a group of teens related to shooting victims in such places as San Bernardino, California; Newton, Connecticut; and Orlando, Florida.
Alba and singer Ne-Yo, who performed Marvin Gaye's "What's Going On," asked the audience to stand and for everyone to post on social media using the hashtag #StopTheViolence.
"Tonight, we stand together with these teens united in a call for peace and an end to this violence," Alba said after each of the teens introduced themselves. "Now, more than ever, we need to stop, feel and ask, 'What's going on?'"
Justin Timberlake also brought seriousness to the otherwise silly ceremony. He was bestowed by Kobe Bryant with the show's version of a lifetime achievement award. The singer-actor used his moment in the spotlight to honor late boxer Muhammad Ali, address the importance of diversity and impart wisdom to the young crowd gathered at the Forum in Inglewood, California.
"As a relatively new dad and a former teen, I am here to say you will make mistakes along the way," he said. "You will fall down. I have many times — even Ali did."
The speech marked the first time Timberlake has accepted an award since he apologized after responding to online backlash following writing that he was inspired by Jessie Williams' speech at the BET Awards, where Williams spoke out about racial issues and cultural appropriation.
"The truth is, we are all different, but that does not mean we all don't want the same thing," said Timberlake.
Teen Choice Awards co-hosts John Cena and Victoria Justice engaged in several goofy stunts between helping to hand out surfboard-shaped trophies in categories honoring film, TV, music, sports and social media, as voted on by viewers.
The 18th annual ceremony kicked off with Cena and Justice respectively dressed as Hillary Clinton and Donald Trump. The gender-bending bit wasn't just for laughs. The pair encouraged teens to register to vote.
Other stunts included the wrestler-actor and singer-actress engaging in a 30-second selfie challenge, as well as Justice and Laverne Cox, her co-star in an upcoming remake of "The Rocky Horror Picture," squirting Cena with water bottles as they explained the movie's plot.
This year's winners on hand to pick up their surfboard-shaped trophies included "Captain America" actor Chris Evans, "Neighbors 2" actress Chloe Grace Moretz, "The Flash" actor Grant Gustin, "Star Wars" actress Daisy Ridley and social media stars Cameron Dallas and the Dolan twins.
The casts of "Pretty Little Liars," ''Teen Wolf" and "Fuller House" were honored with several awards. Jennifer Garner and her young "Miracles from Heaven" co-star Kiley Rogers dedicated the film's prize to sick children.
"Don't give up hope," said Garner.
The two-hour ceremony included performances by "Empire" actress Serayah, Charlie Puth, Flo Rida, Bebe Rexha and Jason Derulo. Fox said more than 37 million votes were cast online for this year's award winners.
Copyright 2016 The Associated Press. All rights reserved. This material may not be published, broadcast, rewritten or redistributed.