Tiger says he is 'progressing nicely' 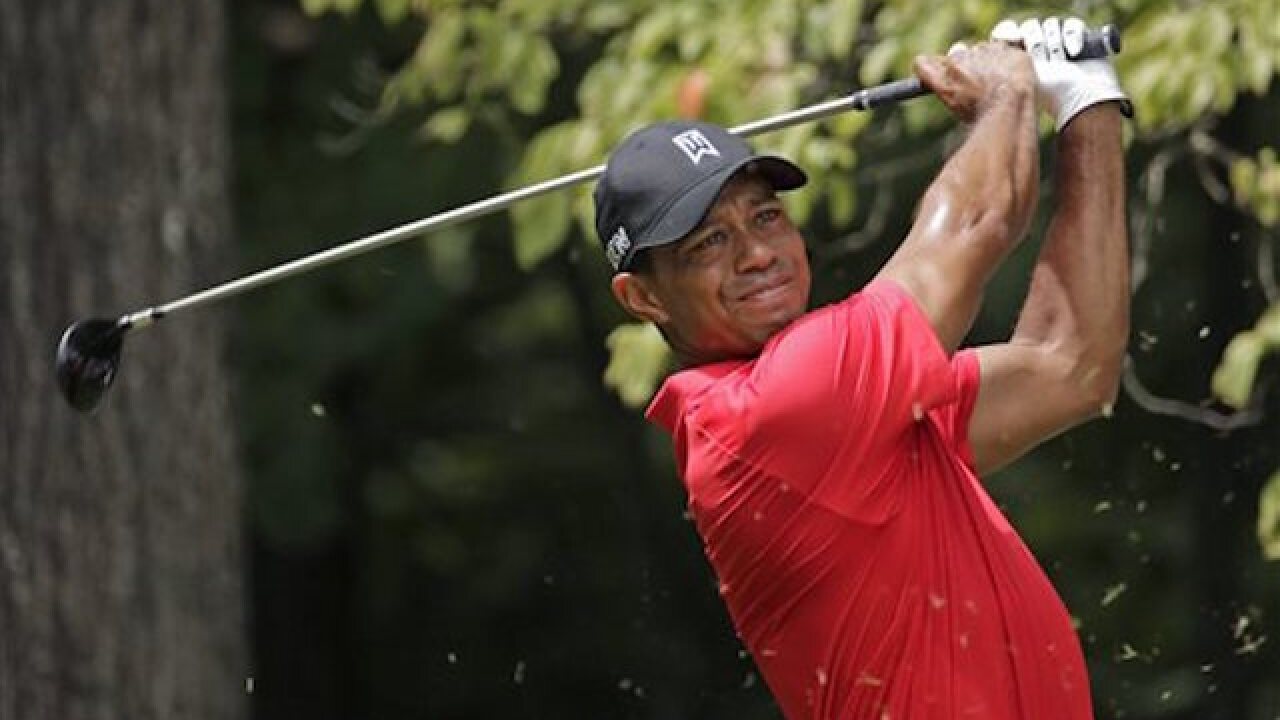 Copyright Associated Press
Chuck Burton
<p>In this Aug. 23, 2015, file photo, Tiger Woods watches his tee shot on the second hole during the final round of the Wyndham Championship golf tournament at Sedgefield Country Club in Greensboro, N.C. Tiger Woods registered for the U.S. Open, which was more procedure than pronouncement. Three weeks later, he played five holes during the official opening of the golf course he designed outside Houston. The next step is returning to competition, which remains unknown. (AP Photo/Chuck Burton)</p>

BETHESDA, Md. (AP) — Tiger Woods grimaced as he took three warmup swings after sitting in a chair for 30 minutes on a cool, blustery Monday morning at Congressional talking about his upcoming tournament. Hitting a ceremonial shot from a forward tee on the par-3 10th hole, he chunked his first attempt into the pond short of the green.

He asked for another ball. That one splashed, too. With officials from his foundation egging him on, he tried one more time. The last one cleared the pond, but not by enough. It landed on a steep bank and rolled down into the water.

His efforts at Congressional — home to the Quicken Loans National, which he hosts and which benefits his foundation — put to rest most of the lingering questions about whether he'll be ready to return to competitive golf anytime soon.

"I have been practicing at home, and I'm progressing nicely. I'm hoping to play," Woods said. "That's the overriding question I keep hearing: When are you coming back, when are you playing? I get it all the time. If I knew, I'd tell, you, because it'd be fun to know."

Woods, who underwent two back surgeries last fall, said he's getting stronger and hitting the ball better. The tournament at Congressional will be played June 23-26, the week after the U.S. Open, and it certainly appears that Woods will attend only in a noncompetitive role.

Woods, 40, hasn't played since last August, and he's fallen to no. 524 in the world ranking. He said Monday he can't spend nearly as much time practicing as he used to. He's been playing friendly games at Medalist, his home club in Florida, but he's yet to play 18 holes, although he said he's physically capable of playing a full round.

"Everything about my game is coming around. Now it's just a matter of being consistent with it," Woods said. "And then being able to do that not only at home against the boys at Medalist and trying to take their cash, but trying to come out here and doing it against the best players in the world is a completely different deal."

If he were healthy, June would be a busy month for Woods, starting with the Memorial and then the U.S. Open at Oakmont, where he tied for second in 2007, followed by the Quicken Loans National, which he's won twice. While Woods did not confirm that he would be absent from those events, he said it's frustrating not to be able to play at places where he's been successful.

Woods also said he considered walking away from the game after his first back surgery, a microdiscectomy in 2014.

He said he no longer has any nerve pain, although he's not pain-free.

Still, Woods believes he can still generate the same clubhead speed that he did when he was younger, and he showed little interest in changing his aggressive style of play to protect his body.

"Ironically enough, my speed's higher than it's been in a few years. And I'm not trying. My technique just changed. That's a good sign. When I get stronger and I do crank it up, I'll have the speed I used to have, which will be nice," Woods said. "... Guys who are on the shorter side have success, but when they're not quite on their game, they're missing cuts."

While sidelined, Woods has watched admiringly as his friend Jason Day has solidified his hold on the No. 1 ranking. The two are in touch frequently and Day, who won the Players Championship on Sunday, has spoken about the valuable advice he's gotten from Woods.

"I think it's fantastic how he's playing, how he's handling himself, how focused he is and how committed to improving" he is, Woods said. "He practices with purpose and you can see it when he plays."