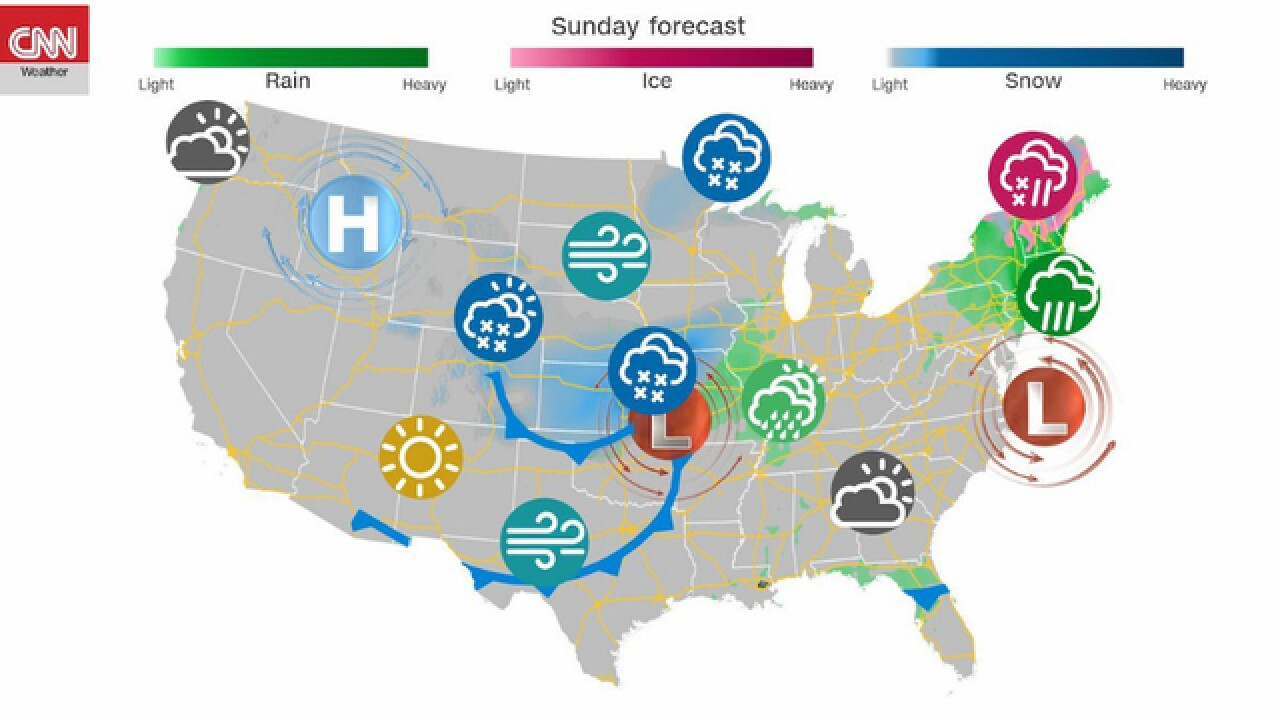 Tranquil weather will accompany most Americans heading to a loved one's dinner table for Thanksgiving. But they might feel a little heartburn on the return trip home Saturday and Sunday, given the traffic congestion and dicey conditions in the forecast.

And if you plan on playing the traditional touch football in New York's Central Park, you might need your parka.

Here's the forecast for the long Thanksgiving holiday:

Choosing to fly Saturday? You are smart to avoid the Sunday crowds, but you are going to have to deal with some weather in the East.

• SOUTHEAST: Have you ever heard of the wedge? It is a weather pattern that makes Atlanta feel like Seattle -- but only colder. The low clouds and light rain will likely contribute to delays at the nation's busiest airport.

This pattern can also make driving treacherous across the Appalachians. An icy wintry mix is possible for the mountains Saturday, from the Carolinas to Pennsylvania.

• NORTHEAST: Precipitation, mostly in the form of rain, will affect the region, leading to some moderate delays at the major airports and compounding delays already seen across the South.

• WEST: Snow lingers in the Rockies, with leftovers for a little après-ski. There are also some showers still in Northern California, but most of the West Coast just stays cloudy with less precipitation.

You are stuffed and tired, and now you have to travel home.

• NORTHEAST: It is never good when you start off the day with delays. That might just happen Sunday morning. Northeast metro areas could see rain early and throughout the day. Most of the wintry precipitation should stay sequestered farther north into Maine.

• SOUTH: It looks like the misery of Saturday's rain will have subsided, but the residual hangover may still have some effect on travel. Low clouds could be an issue in the early morning.

• MIDSECTION: A low exits the Rockies and brings snowy conditions from light snow in the front range, across Kansas. Most of south and central Missouri stay on the warmer side, with rain mostly in places such as St. Louis. Kansas City on the other hand, will see rain changing to snow Sunday morning with blowing snow by mid-day as winds pick up. This swath of snow will impact southern Iowa and extend all the way to Chicago by Sunday evening.

• WEST: It finally dries out, so you might be able to get a sunny ski session in before battling the roadways. The drive up and down the West Coast will be tremendously better than it was Wednesday.

All in all, the weather this week is much better than in previous years so most of you won't be able to use it as an excuse. Don't think you're going to be able to get out of turkey and turmoil with your in-laws.