KGUN 9 On Your SideNewsNational NewsTerrorism

305 people were killed after prayer service 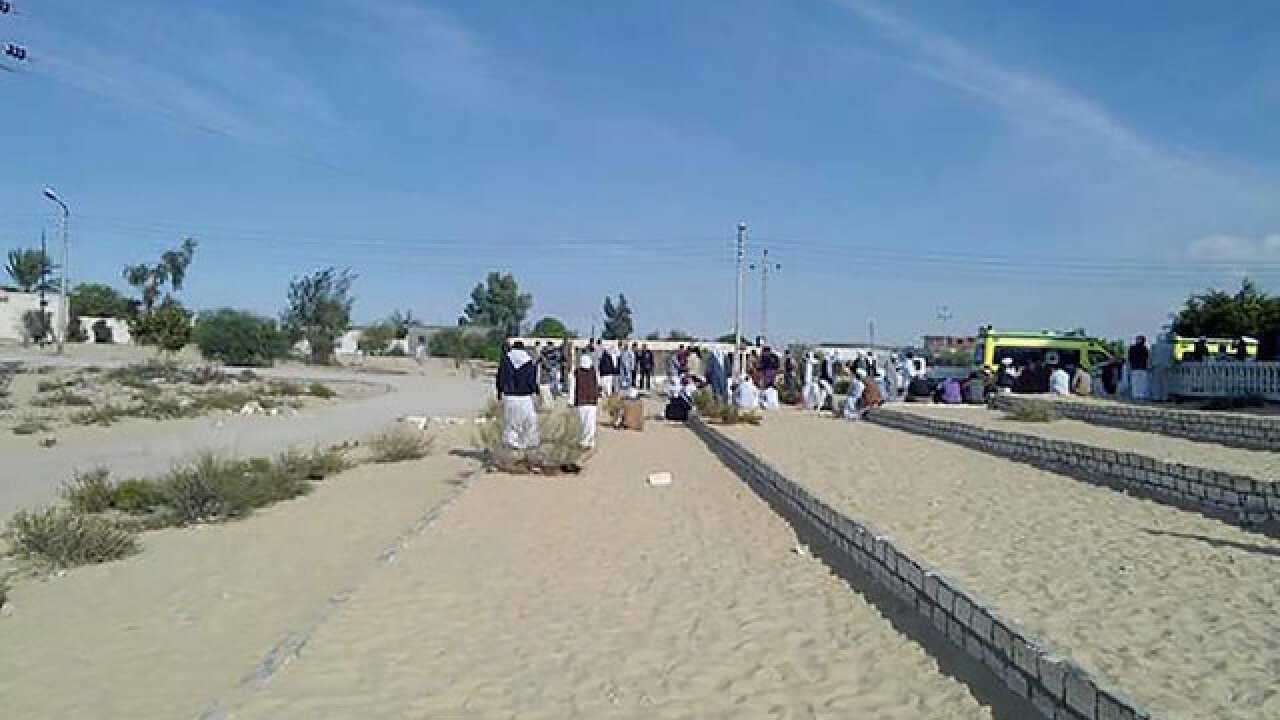 Copyright 2018 Scripps Media, Inc. All rights reserved. This material may not be published, broadcast, rewritten, or redistributed.
Stringer/AFP/Getty Images
**This image is for use with this specific article only** Egyptians gather outside Al Rawdah mosque, about 25 miles west of the North Sinai capital of Al-Arish, following the attack.

Twenty-five to 30 attackers arrived in five SUVs at the al Rawdah Sufi mosque in Bir al-Abed on Friday. Some wore masks and at least one was carrying an ISIS flag, the state prosecutor told state-run Nile TV in a statement.

They positioned themselves at the building's entrances and the front of the mosque shortly before the massive gunfire and loud explosions rang out.

By the time the attackers' weapons went quiet, 305 people were dead, including 27 children, the prosecutor said Saturday. An additional 128 people were wounded.

The al Rawdah Sufi mosque is known as the birthplace of an important Sufi cleric. Sufism is a mystical branch of Islam that some jihadists consider heretical.

Sitting outside a hospital emergency room, a survivor who did not want to be identified told CNN that he still had shrapnel in an eye that was covered by a bandage. He believes he survived because he was covered by the bodies of other victims as the attackers went around the mosque to ensure everyone was dead, he said.

"No one got out of the mosque," said another witness at a nearby hospital. The man, who also declined to be identified out of fear of retaliation, said his father and eight other family members, including a brother and nephew, were killed.

The nation has set aside three days of national mourning and President Abdel Fattah el-Sisi has ordered the armed forces to build a memorial to those killed at the mosque, a statement on his official Facebook page said.

Ahmed El-Tayyeb, the grand imam of Al-Azhar, condemned the "barbaric attack" on the mosque and said Egyptians would prevail over terrorism with solidarity and determination.

Al-Azhar is the premier religious authority in Egypt.

No claim of responsibility yet

President Sisi vowed to respond to the massacre -- believed to be the deadliest terrorist attack in the country -- with "brute force."

There has been no claim of responsibility from ISIS or its affiliate in Egypt. However, the attack bears the hallmarks of a strike by ISIS. The group maintains a foothold in the north of the Sinai Peninsula and inspires local Islamist extremist groups despite the efforts of Egyptian security forces.

Sisi has expressed concern recently that ISIS militants fleeing Iraq and Syria would come to Egypt.

The Wilayat Sinai group, which pledged allegiance to ISIS in 2014, has been behind numerous attacks and hundreds of deaths in the desert region.

It claimed responsibility for the bombing of a Russian passenger jet that crashed in October 2015 in the Sinai Peninsula, killing 224 people.

If it turns out ISIS militants are behind the latest attack, "it reflects their willingness to continue to do large operations that have large civilian casualties," said Timothy Kaldas, a fellow at the Tahrir Institute for Middle East Policy.

There would be two plausible motives for an ISIS attack, he said. First, ISIS considers Sufis to be heretics, making the Sufi mosque a legitimate target in the eyes of ISIS, even though all worshipers probably weren't Sufi.

Second, Kaldas said, ISIS may be taking revenge against members of the Sawarkah tribe, to which most of the people in the area belong, because it has been cooperating with the Egyptian government in its campaign against Wilayat Sinai.