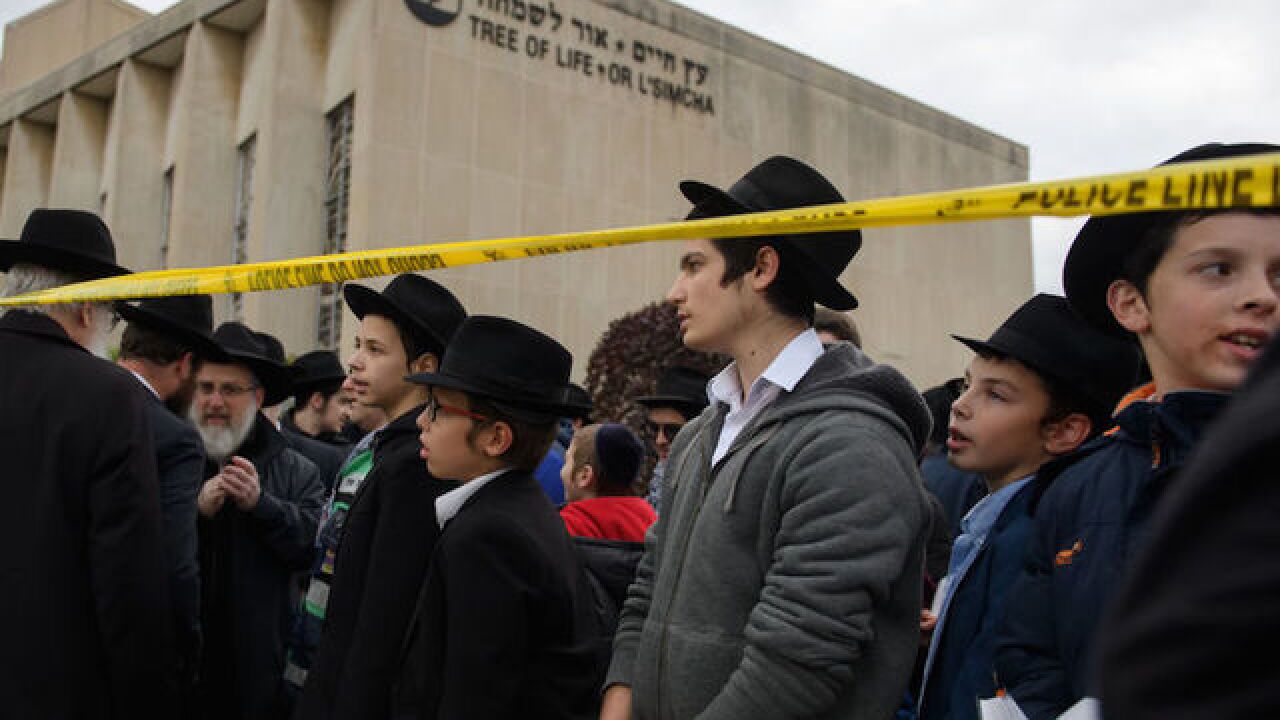 Image copyright 2018 Getty Images. All rights reserved. This material may not be published, broadcast, rewritten, or redistributed.
Jeff Swensen
<p>Orthodox Jews gather to hold a prayer session Monday afternoon at the site of the mass shooting that killed 11 people and wounded 6 at the Tree Of Life Synagogue on October 29, 2018 in Pittsburgh, Pennsylvania. Eleven people were killed and six more wounded in the mass shooting that police say was fueled by antisemitism. </p>

Defense attorneys for the suspect in the Pittsburgh synagogue massacre entered a plea of not guilty Thursday to federal charges and requested a jury trial.

Robert Bowers, 46, walked into court in wrist and ankle restraints Thursday, his second court appearance this week, after a federal grand jury indicted him on 44 federal charges in last weekend's slaying of 11 worshippers at the Tree of Life synagogue.

During the arraignment, Bowers watched prosecutors and nodded periodically. He responded "yes" that he understood the penalties of the charges, and his public defender, Michael J. Novara, entered a plea of not guilty "as is typical," he said.

Of the 44 charges, 32 counts are punishable by death, a grand jury filing released Wednesday said.

The court hearing comes the same day that crowds of mourners will lay more victims to rest and as their memorials continue to grow.

On Monday, Bowers had been brought to the courtroom in a wheelchair and only spoke to answer the judge's questions. Bowers was appointed a local public defender Wednesday.

He is being held at the Butler County Jail without bond.

"Today begins the process of seeking justice for the victims of these hateful acts, and healing for the victims' families, the Jewish community, and our city," US Attorney Scott Brady said in a statement.

Bowers is charged with 11 counts each of obstruction of the free exercise of religious beliefs resulting in death and use of a firearm to commit murder during a crime of violence, a conviction on any of which could be punishable by death, according to the indictment.

He faces 10 other potential death penalty charges, according to the federal indictment:

"Every American has the right to attend their house of worship in safety," Attorney General Jeff Sessions said in a statement announcing the indictment. "These alleged crimes are incomprehensibly evil and utterly repugnant to the values of this nation. Therefore this case is not only important to the victims and their loved ones, but to the city of Pittsburgh and the entire nation."

In the Squirrel Hill neighborhood, families and members of the Jewish community in Pittsburgh and around the nation are rallying together to honor the victims of the massacre.

The third day of funerals for the victims will begin with one celebrating the lives of Bernice and Sylvan Simon while the funeral for Richard Gottfried is set for later Thursday afternoon.

The Simons were the "sweetest people you could imagine," a neighbor who lived next to them for nearly 40 years said.

Bernice, 84, was a former nurse, who loved classical music and devoted time to charitable work and her husband Sylvan, 86, was a retired accountant with a good sense of humor, CNN affiliate WPIX reported.

"They held hands and they would always smile. He would open the door for her, you know all those things that you want from another person," another neighbor, Heather Graham, told CNN affiliate WTAE. "They were really generous and nice with everybody,"

Gottfried, 65, was a husband, a brother and a compassionate hand who helped many in his community.

Gottfried and his wife had a dental practice but he was getting ready to retire when he died in the shooting.

He volunteered at Catholic Charities free clinic for more than nine years and was part of a group of dentists and specialists who offer educational lectures and workshops in dentistry. Gottfried and his wife also helped prepare interfaith couples for marriage through the St. Athanasius church.

"He was about helping everybody," Catholic Charities of Pittsburgh executive director Susan Raucher told CNN affiliate KDKA. "Everywhere he could possibly be helpful, he was taking those hours and absolutely doing that. Regardless of source or background or any of that sort of things."

More funerals for the shooting victims are planned in Pittsburgh in the coming days.