Streb shoots 63 and joins Walker in lead at PGA 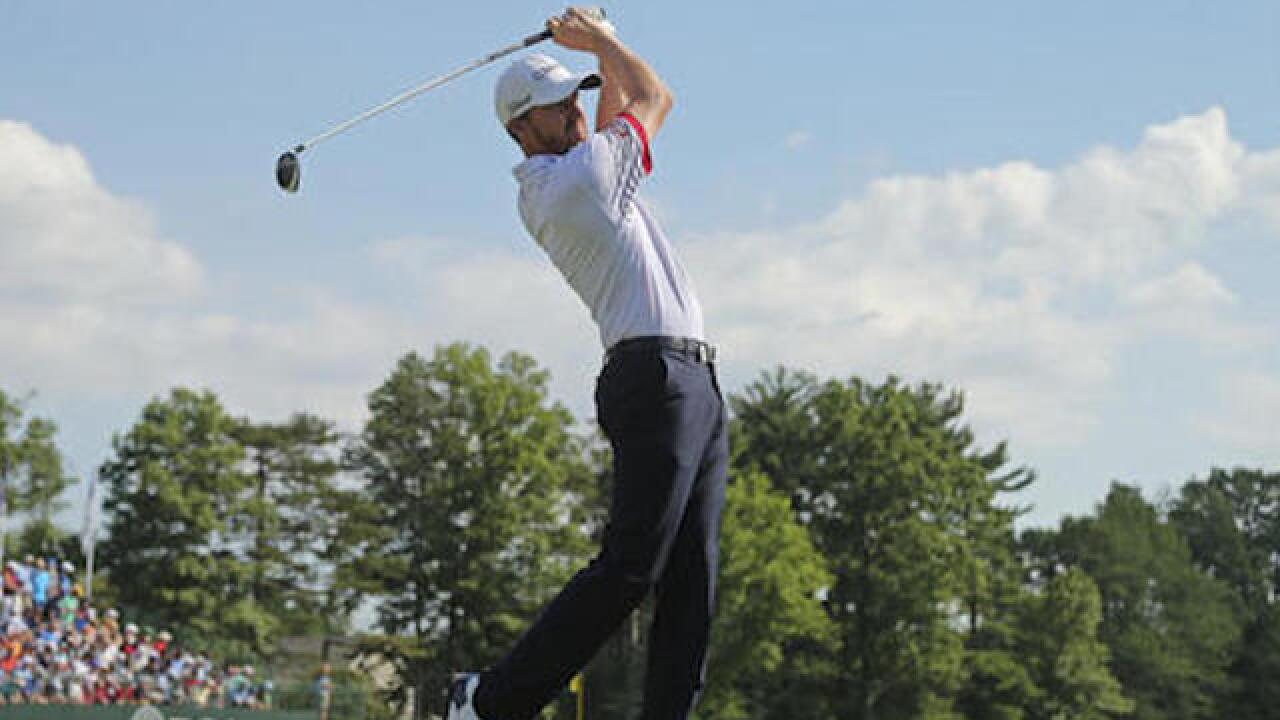 SPRINGFIELD, N.J. (AP) — Robert Streb became the latest player to shoot 63 in a major, and hardly anyone noticed in a PGA Championship with endless action across Baltusrol on Friday.

Streb was on the far end of the rain-soaked course when he hit 6-iron into 20 feet on his last hole, the par-3 ninth, and made the putt to become the 28th player with a 63 in a major. It was the third round of 63 in a major in the last 16 days, following Phil Mickelson (first round) and Henrik Stenson (fourth round) at the British Open.

"Happy to join the club that seems to be ever growing," Streb said.

Equally thrilling was to be tied for the lead with Jimmy Walker, who shot a 4-under 66.

They were at 131, matching the 36-hole record at the PGA Championship first set in 1983 by Hal Sutton at Riviera and last done by Jason Dufner in 2013 at Oak Hill.

Streb badly missed a 15-foot birdie putt on the eighth hole, and he was determined to at least give himself a chance on the ninth. He knew was at stake, and so did the small gallery that gathered around the ninth green.

"It was pretty noisy for the 15 people that were out there," he said.

Most of the crowd was at the par-5 closing holes at Baltusrol, and there was no shortage of entertainment.

In a summer of scoring records at the majors, Walker looked as though he would set the 36-hole mark when he was at 10 under with two par 5s remaining. But he hit into the hospitality area well left of the 17th and scrambled for par, and then his tee shot narrowly missed its mark and found the water on the 18th, leading to bogey.

Even so, he was tied at the halfway point of a major.

"It's going to be a new experience, and it will be fun," Walker said. "You still have to go perform. Doesn't matter what tournament it is."

Defending champion Jason Day dropped to even par with a double bogey on No. 7, and that appeared to wake up the world's No. 1 player. Day went on a tear with seven birdies over his next eight holes, two of them from 18 feet, one of them from 35 feet.

Suddenly, he was on the verge of a shot at 63 until he hooked his tee shot to the base of the hospitality area on the 17th, and pushed a driving iron into the right rough on the 18th. He settled for pars at both for a 65.

Day was right where he wanted to be, three shots behind going into the weekend, his name high on the leaderboard for everyone to see. At stake is a chance to join Tiger Woods as the only back-to-back PGA champions since the stroke-play era began in 1958.

Day was joined at 7-under 133 by Emiliano Grillo, the talented young Argentine who worked hard on his putting at Baltusrol and watched it pay off. Grillo got this afternoon of birdies going by making five of them in a seven-hole stretch on the back nine until he cooled on the front and had to settle for a 67.

This is new territory for him, too.

Just like Walker and Streb, he has never even contended in a major.

"I've never been in this situation, and I'm not afraid of it," Grillo said. "I'm going to go out and enjoy it."

By the end of the day, it was easy to overlook a familiar figure — Stenson, the British Open champion who made eagle on the 18th at the turn and polished off another 67. He was only four shots behind in his bid to match Ben Hogan as the only players to win two straight majors at age 40.

Mickelson made the cut, and that might have been the most entertaining of all.

He began his round with a tee shot so far left that it sailed off the property, bounced along Shunpike Road and caromed to the left down Baltusrol Way. Wherever it finished, it was out-of-bounds, and Mickelson had to scramble for a triple bogey. He spent the rest of the day battling to get back, and he delivered on the 18th with a birdie to post a 70.

"I think in the history of the PGA Championship, that's the worst start of any player's round. I'd have to look it up," Mickelson said.

No need to. Someone pointed out that Nicolas Colsaerts piped two over the fence and made 8.

"I'm having a difficult time right now managing my expectations, because I know how well I'm playing and I'm so result-oriented that I'm not playing very relaxed, free golf like I did at the British, like I did in the preparation here," Mickelson said.

A dozen players were separated by five shots going into the weekend, a group that included Martin Kaymer (69), Patrick Reed (65) and Brooks Koepka (67) at 135, and even Rickie Fowler getting into the act with a birdie-eagle finish for a 68 to get within five shots.

Jordan Spieth was finally back in the mix, at least on the fringes, after a hot start that led to a 67. He was in the group six shots behind.

The biggest surprise was Streb, who became the fourth player with a 63 at Baltusrol. Jack Nicklaus and Tom Weiskopf each had 63 in the opening round of the 1980 U.S. Open, and Thomas Bjorn shot 63 in the third round in the 2005 PGA Championship.

Streb hasn't had a top 10 on the PGA Tour since he tied for 10th in the PGA Championship last year. He found something in his swing a few weeks ago, birdied the last four holes a week ago Friday in the Canadian Open just to make the cut, and grabbed a sliver of history at Baltusrol.