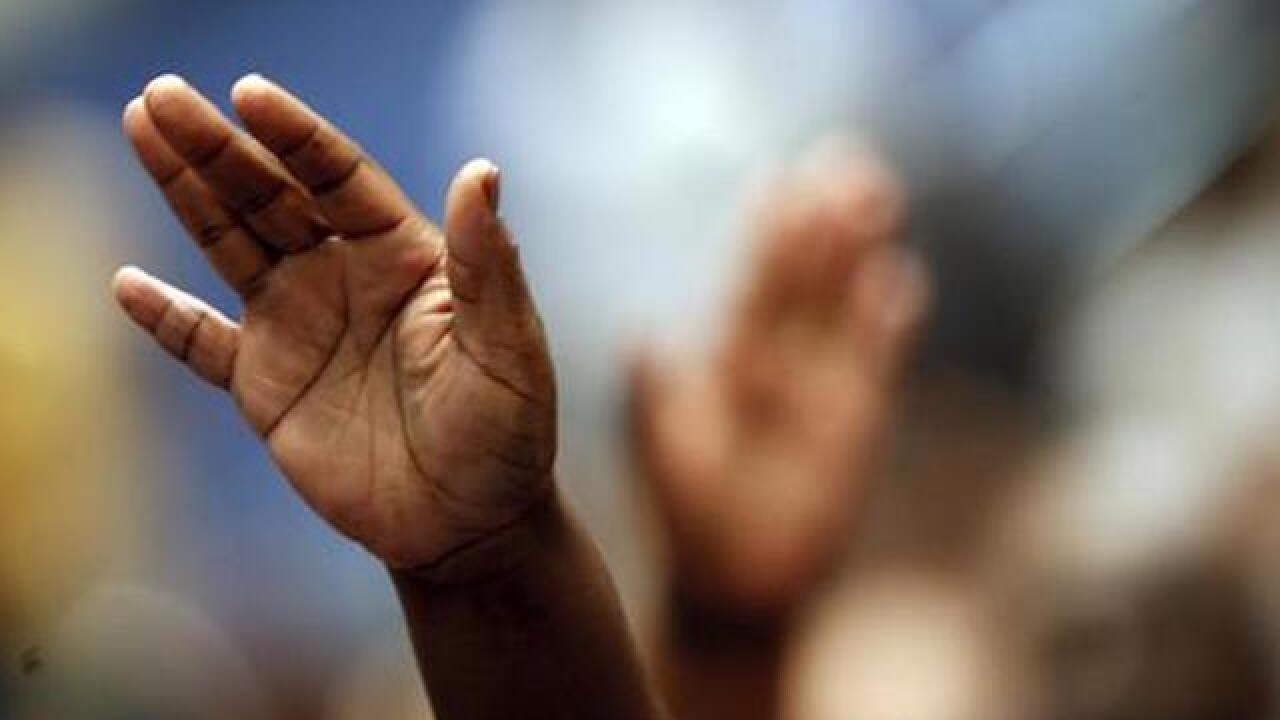 Copyright Associated Press
Gerald Herbert
<p>In this July 7, 2016, photo, members of the Living Faith Christian Center congregation sing a hymn at a prayer vigil for Alton Sterling, who was shot by Baton Rouge police in Baton Rouge, La. Two-thirds of young African-Americans and 4 in 10 Hispanics say that they or someone they know has experienced violence or harassment at the hands of the police, according to a new GenForward poll. The first-of-its-kind poll pays special attention to the voices of young adults of color, highlighting how race and ethnicity shape the opinions of a new generation. (AP Photo/Gerald Herbert)</p>

DETROIT (AP) — Crystal Webb cringes whenever a patrol car appears in her rearview mirror. She also never wants to see the inside of a police station again.

Her personal experience with police, plus recent fatal shootings of unarmed black men by white officers, has led the Apple Valley, California, mother of two to ask: Who are the good guys and who are bad?

"You are the people I'm supposed to go to when I'm in trouble," Webb says of police.

Two-thirds of young African-Americans and 4 in 10 Hispanics say that they or someone they know has experienced violence or harassment at the hands of the police, according to a new GenForward poll. That includes about 2 in 10 in each group who say that was a personal experience, including about 3 in 10 black men who say the same.

But the poll also shows that young people still desire a police presence in their communities.

GenForward is a survey of adults age 18 to 30 by the Black Youth Project at the University of Chicago with the Associated Press-NORC Center for Public Affairs Research. The first-of-its-kind poll pays special attention to the voices of young adults of color, highlighting how race and ethnicity shape the opinions of a new generation.

Those poll results come after the killing of several young black men by police around the country. Two of the more recent killings were the July 5 shooting death of Alton Sterling during a struggle with officers in Baton Rouge, Louisiana, and the fatal shooting of Philando Castile the following day by an officer in a suburb of St. Paul, Minnesota.

About 6 in 10 young adults consider the killings of black people by the police and violence against the police as extremely or very serious problems, according to the poll. But young African-Americans and Hispanics see killings by police as more serious problems and young whites see violence against the police as more serious. Most, especially blacks and Hispanics, say not-guilty verdicts for three Baltimore police officers charged in the April 2015 death of Freddie Gray give them less confidence in the police.

Gray, 25, was fatally injured while handcuffed and shackled in the back of the van.

Among young whites and Asians in the new poll, just 3 in 10 say they or someone they know has experienced police harassment, and just 1 in 10 white and 1 in 20 Asians say that was a personal experience.

Crystal Webb, who is black, says she was arrested last November by two officers — one white, the other black.

"They threw me in the police car and when I gave them my story, the other officer who was white gave me a look," she said. "While the officer of color was asking questions and being nice, the other officer got in the car and started yelling at me. He told me to just shut up."

Webb, 29, said she was four months pregnant at the time and her hands were cuffed behind her back in the rear of the car. She said the white officer was driving and sped off. "The car jerked and it almost broke my arm," Webb said. "He kept doing it all the way to the jail."

The charges eventually were dropped by a judge, she said.

Webb said she believes the white officer was rude to her because of her skin color.

"I think he looked at me like I was ghetto," she said.

The new poll shows young people, including young blacks and Hispanics, do want a police presence in their communities. In fact, most support adding more police or armed security guards in public places like schools, movie theaters and malls.

"We need good (police officers)," Webb said. "We need people who aren't going to react so quickly to a person of color."

Billy Busby, 24, of Atlanta, says he was working a security job and helping police in Myrtle Beach, South Carolina, with crowd and traffic control during the popular Black Bike Beach in May when he was approached by a white officer.

Busby said his supervisor showed up, vouched for him and defused the situation.

"I think she felt intimidated because I was a black male and doing traffic," Busby said.

Harassment of black men by white officers is routine, he added.

Some officers in southern Mississippi target Hispanics, thinking they're in the U.S. illegally, said Patience Buxton, 28, who owns a company in Forest, Mississippi, that shuttles people back and forth to various appointments.

Buxton is biracial and identifies as white, and says many of her customers are Hispanic.

"I know they are looking at me," Buxton said of officers. "I get nervous myself. I know I've done nothing wrong. They've called me a coyote, asked me if I'm transporting illegals. They abuse their authority completely."

The poll of 1,940 adults age 18-30 was conducted July 9-20 using a sample drawn from the probability-based GenForward panel, which is designed to be representative of the U.S. young adult population. The margin of sampling error for all respondents is plus or minus 3.8 percentage points.

The survey was paid for by the Black Youth Project at the University of Chicago, using grants from the John D. and Catherine T. MacArthur Foundation and the Ford Foundation.