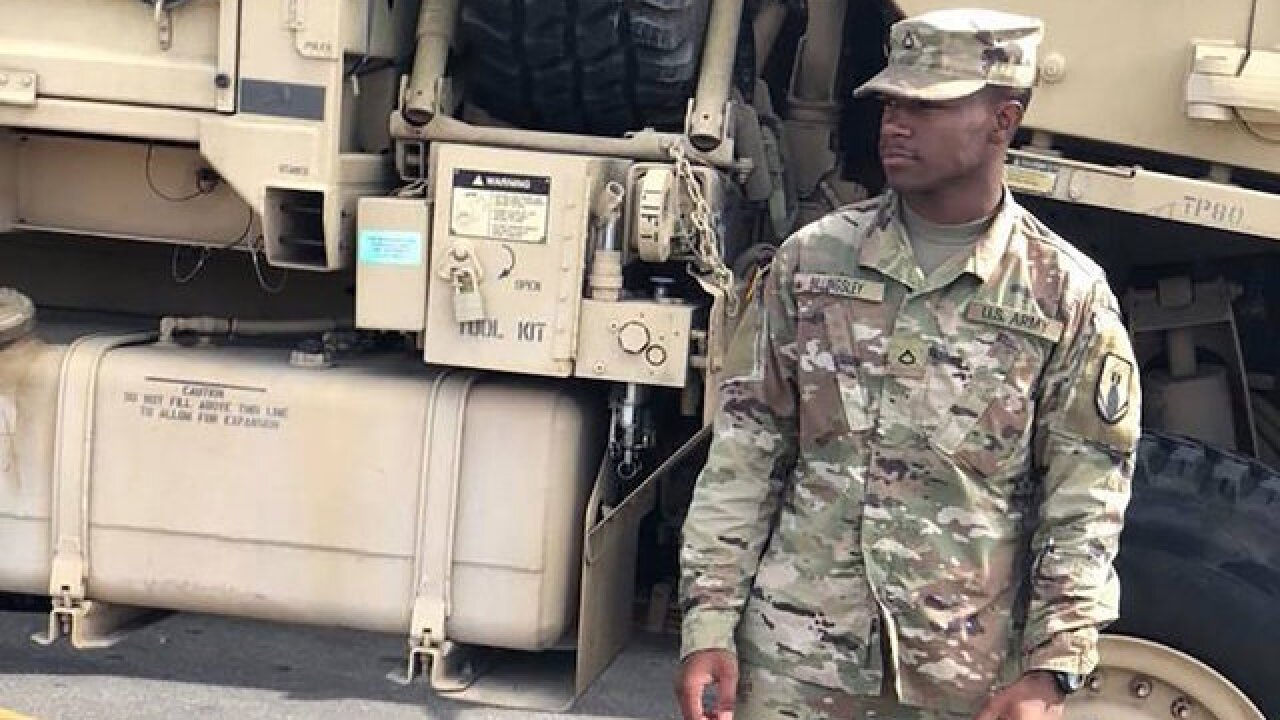 Image copyright 2018 Getty Images. All rights reserved. This material may not be published, broadcast, rewritten, or redistributed.
From Facebook
<p>A 12-year-old girl is out of the hospital and doing well after a Thanksgiving night mall shooting, thanks in part to a quick-thinking Army National Guardsman, Spc. Rashad Billingsley, whose training kicked in when shots rang out.</p>

Hoover police can't seem to get their story straight on why an officer killed a man at an Alabama mall.

First, they said a 21-year-old suspect shot and wounded two other people. Then they said Emantic Bradford didn't pull the trigger, but brandished a gun. Now we've learned Bradford didn't necessarily do that, either.

All the while, the real assailant who opened fire at the mall is still on the loose.

Police said two men got into a fight at the mall, and one of the men shot the other twice in the upper body.

Two uniformed Hoover officers working security at the mall were nearby, police said.

"While moving toward the shooting scene, one of the officers encountered a suspect brandishing a pistol and shot him," police said in a statement.

They identified the slain suspect as a 21-year-old from nearby Hueytown.

The other man who was shot at the mall and a 12-year-old girl struck by a stray bullet both survived.

Hoover police identified the man killed as Emantic Bradford Jr. They said Bradford fled the shooting scene "while brandishing a handgun," and an officer shot him.

But Bradford probably wasn't the gunman who shot and wounded an 18-year-old man at the mall, police said. They said the Alabama Law Enforcement Agency is now taking the lead on the investigation.

"New evidence now suggests that while Mr. Bradford may have been involved in some aspect of the altercation, he likely did not fire the rounds that injured the 18-year-old victim," Hoover police posted on Facebook.

"Investigators now believe that more than two individuals were involved in the initial altercation. This information indicates that there is at least one gunman still at-large, who could be responsible for the shooting of the 18-year-old male and 12-year-old female," police said.

"We regret that our initial media release was not totally accurate, but new evidence indicates that it was not."

Monday morning
Police: 'We can say with certainty Mr. Bradford brandished a gun'

Four days after the shooting, Hoover police and the city of Hoover offered their condolences to Bradford's family -- but insisted that Bradford brandished a gun.

"We extend sympathy to the family of Emantic J. Bradford of Hueytown, who was shot and killed during Hoover Police efforts to secure the scene in the seconds following the original altercation and shooting," a joint statement from the city and police department said.

"We can say with certainty Mr. Bradford brandished a gun during the seconds following the gunshots, which instantly heightened the sense of threat to approaching police officers responding to the chaotic scene."

Bradford's parents said their son had a permit to carry a weapon.

Hoover police said the officers' body camera footage is now in the hands of the Alabama Law Enforcement Agency. It's not clear if or when the ALEA will release that footage to the public.

Meanwhile, Bradford's parents told CNN they are distraught that police still hadn't reached out to them, almost four days after their son was killed by an officer.

"They haven't told me anything yet. Nobody has responded," said Bradford's father, Emantic Fitzgerald Bradford Sr. "We haven't gotten no calls and no apology."

Hoover police issued another clarification, saying Bradford simply had a gun in his hand:

"Earlier, we stated that Mr. Bradford 'brandished' a gun. To clarify, the word 'brandish' was used because Mr. Bradford had a gun in his hand as police officers responded to the active shooter situation between mall patrons."

But to "brandish" -- according to most definitions -- means to wave or show a weapon in an aggressive or menacing way.

Bradford was actually trying to help people to safety when he was shot, said his family's attorney, Ben Crump.

Crump also said Bradford had a permit to carry a concealed weapon.

Monday evening
The shooter is still out there

Hoover Mayor Frank Brocato said the state is still investigating the shooting, including the search for the suspect who remains at large.

He also said the city is in the process of requesting a meeting with the Bradford family.

The mayor and Hoover police have urged patience as state authorities try to determine what happened. The police department has referred CNN's questions to the ALEA.

But Crump said the Bradford family's patience is wearing thin.

"Show us the video. Your words mean nothing to them," Crump said Monday.

Crump said he believes the officer who killed "EJ" -- one of Bradford's nicknames -- rushed to judgment.

"(The officer) saw a black man with a gun and he made his determination that he must be a criminal," Crump said.