On 'mission to touch the sun,' NASA's Parker Solar Probe has launched 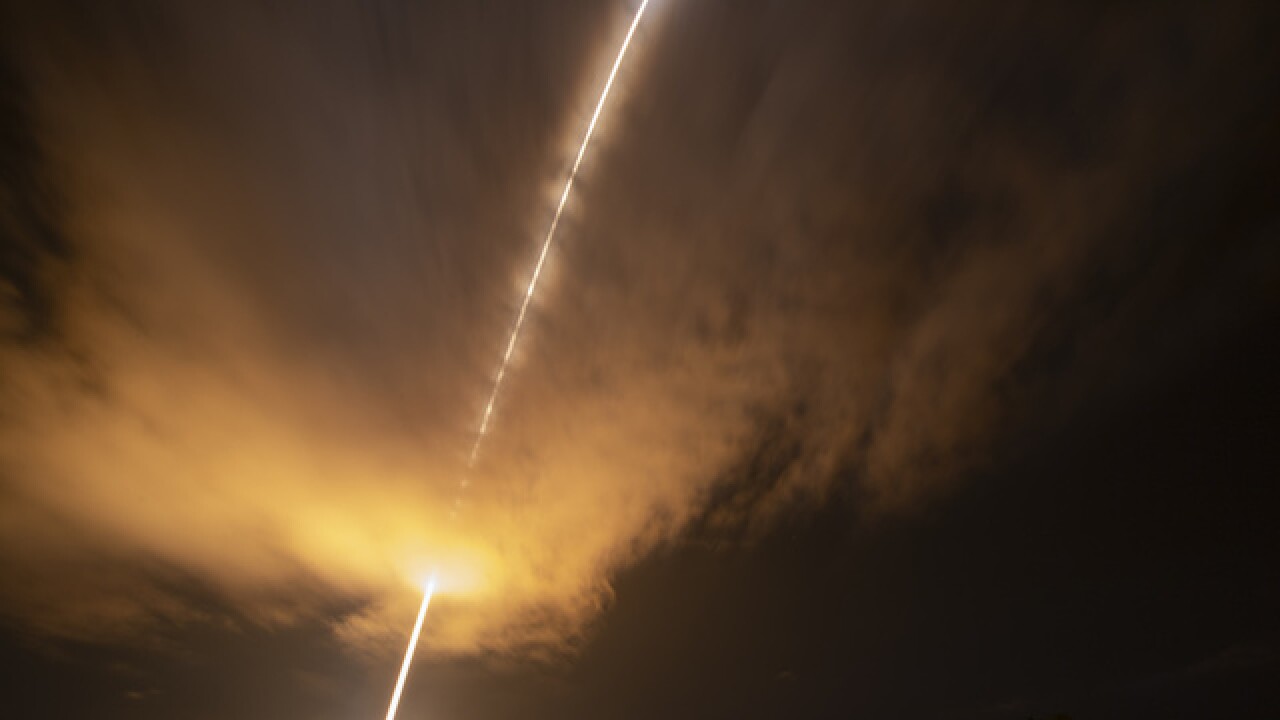 Image copyright 2018 Getty Images. All rights reserved. This material may not be published, broadcast, rewritten, or redistributed.
NASA
<p>In this handout provided by NASA, The United Launch Alliance Delta IV Heavy rocket is seen in this long exposure photograph as it launches NASA's Parker Solar Probe to touch the Sun from Launch Complex 37 at Cape Canaveral Air Force Station on August 12, 2018 in Cape Canaveral, Florida. </p>

Humanity's first visit to a star began this weekend. NASA's Parker Solar Probe will explore the sun's atmosphere in a mission that launched early Sunday. This is the agency's first mission to the sun and its outermost atmosphere, the corona.

After being delayed on Saturday, the probe successfully launched at 3:31 a.m. ET Sunday from Cape Canaveral, Florida, on a United Launch Alliance Delta IV Heavy rocket, one of the world's most powerful rockets.

Although the probe itself is about the size of a car, a powerful rocket is needed to escape Earth's orbit, change direction and reach the sun.

The launch window was chosen because the probe will rely on Venus to help it achieve an orbit around the sun.

Six weeks after launch, the probe will encounter Venus' gravity for the first time. It will be used to help slow the probe, like pulling on a handbrake, and orient the probe so it's on a path to the sun.

"The launch energy to reach the Sun is 55 times that required to get to Mars, and two times that needed to get to Pluto," Yanping Guo of the Johns Hopkins Applied Physics Laboratory, who designed the mission trajectory, said in a statement. "During summer, Earth and the other planets in our solar system are in the most favorable alignment to allow us to get close to the Sun."

Preparing for a journey to the sun

It's not a journey that any human can make, so NASA is sending a fully autonomous probe closer to the sun than any spacecraft has ever reached.

The probe will have to withstand heat and radiation never previously experienced by any spacecraft, but the mission will also address questions that couldn't be answered before. Understanding the sun in greater detail can also shed light on Earth and its place in the solar system, researchers said.

"We've been studying the Sun for decades, and now we're finally going to go where the action is," said Alex Young, solar scientist at NASA's Goddard Space Flight Center, in a statement.

In order to reach an orbit around the sun, the Parker Solar Probe will take seven flybys of Venus that will essentially give a gravity assist, shrinking its orbit over the course of nearly seven years.

The probe will orbit within 3.9 million miles of the sun's surface in 2024, closer to the star than Mercury. Although that sounds far, researchers equate this to the probe sitting on the 4-yard line of a football field and the sun being the end zone.

When closest to the sun, the 4½-inch-thick carbon-composite solar shields will have to withstand temperatures close to 2,500 degrees Fahrenheit. However, the inside of the spacecraft and its instruments will remain at a comfortable room temperature.

"We've been inside the orbit of Mercury and done amazing things, but until you go and touch the sun, you can't answer these questions," said Nicola Fox, mission project scientist. "Why has it taken us 60 years? The materials didn't exist to allow us to do it. We had to make a heat shield, and we love it. Something that can withstand the extreme hot and cold temperature shifts of its 24 orbits is revolutionary."

The probe will reach a speed of 430,000 miles per hour around the sun, setting a record for the fastest manmade object. On Earth, this speed would enable someone to get from Philadelphia to Washington in one second, the agency said.

Why send a probe to the sun?

The observations and data could provide insight about the physics of stars, change what we know about the mysterious corona, increase understanding of solar wind and help improve forecasting of major space weather events. Those events can affect satellites and astronauts as well as the Earth -- including power grids and radiation exposure on airline flights, NASA said.

Solar wind is the flow of charged gases from the sun, present in most of the solar system. It screams past Earth at a million miles per hour, and disturbances can cause disruptive space weather that impacts our planet.

Surveys by the National Academy of Sciences have estimated that a solar event with no warning could cause $2 trillion in damage in the United States and leave parts of the country without power for a year.

The mission's objectives include "tracing the flow of energy that heats and accelerates the sun's corona and solar wind, determining the structure and dynamics of the plasma and magnetic fields at the sources of the solar wind and explore mechanisms that accelerate and transport energetic particles."

Four suites of instruments will gather the data needed to answer key questions about the sun. FIELDS will measure electric and magnetic waves around the probe, WISPR will take images, SWEAP will count charged particles and measure their properties, and ISOIS will measure the particles across a wide spectrum.

But what part of this mission will "touch" the sun? The Solar Probe Cup, dubbed "the bravest little instrument," is a sensor that will extend beyond the heat shield to "scoop up samples" of the sun's atmosphere, according to Justin Kasper, mission principal investigator and professor of climate, space sciences and engineering at the University of Michigan. The cup will glow red when the probe makes its closest approach to the sun, sampling the solar wind and effectively touching the sun.

"The Alfvén point is the distance from the Sun beyond which the charged particles that make up the solar wind are no longer in contact with the surface of the Sun," Kristopher Klein, co-investigator for the probe and University of Arizona Lunar and Planetary Lab assistant professor, said in a statement. "If the Parker Solar Probe can reach below the Alfvén point, then we can say the spacecraft has entered the solar atmosphere and touched the Sun."

The probe will be close enough to watch solar wind whip up from subsonic to supersonic. It will also pass through the origin of the solar particles with the highest energy.

"It will provide us with a better understanding of the environment the Earth is in," Klein said. "Our ability to forecast space weather is about as good as our weather forecasts were in the 1970s. If you have a better understanding of the behavior of these solar energetic particles, then you can make better predictions about when to send astronauts to Mars or protect a satellite before it gets ripped apart by a radiation burst."

The mission is scheduled to end in June 2025. The first data download from the Parker Solar Probe is expected in early December, after the probe reaches its first close approach of the sun in November.

"Eventually, the spacecraft will run out of propellant," said Andy Driesman, Parker Solar Probe project manager at the Johns Hopkins Applied Physics Lab. "The way I like to think about it: In 10 to 20 years, a carbon disk will be floating around the sun in orbit, and it will be around until the end of the solar system."

In 2017, the craft -- initially called the Solar Probe Plus -- was renamed the Parker Solar Probe in honor of astrophysicist Eugene Parker.

"This is the first time NASA has named a spacecraft for a living individual," said Thomas Zurbuchen, associate administrator for the agency's Science Mission Directorate in Washington. "It's a testament to the importance of his body of work, founding a new field of science that also inspired my own research and many important science questions NASA continues to study and further understand every day. I'm very excited to be personally involved honoring a great man and his unprecedented legacy."

Parker published research predicting the existence of solar wind in 1958, when he was a young professor at the University of Chicago's Enrico Fermi institute. At the time, astronomers believed that the space between planets was a vacuum. Parker's first paper was rejected, but it was saved by a colleague, Subrahmanyan Chandrasekhar, an astrophysicist who would be awarded the 1983 Nobel Prize for Physics.

Less than two years after Parker's paper was published, his theory of solar wind was confirmed by satellite observations. His work revolutionized our understanding of the sun and interplanetary space.

"I'm greatly honored to be associated with such a heroic scientific space mission," Parker said.

The Parker Solar Probe will carry a chip with photos of Parker, his revolutionary paper and his message to the sun: "Let's see what lies ahead." It will also carry more than 1.1 million names submitted by the public that will eventually "orbit the sun forever," Fox said.

"The solar probe is going to a region of space that has never been explored before," Parker said. "It's very exciting that we'll finally get a look. One would like to have some more detailed measurements of what's going on in the solar wind. I'm sure that there will be some surprises. There always are."