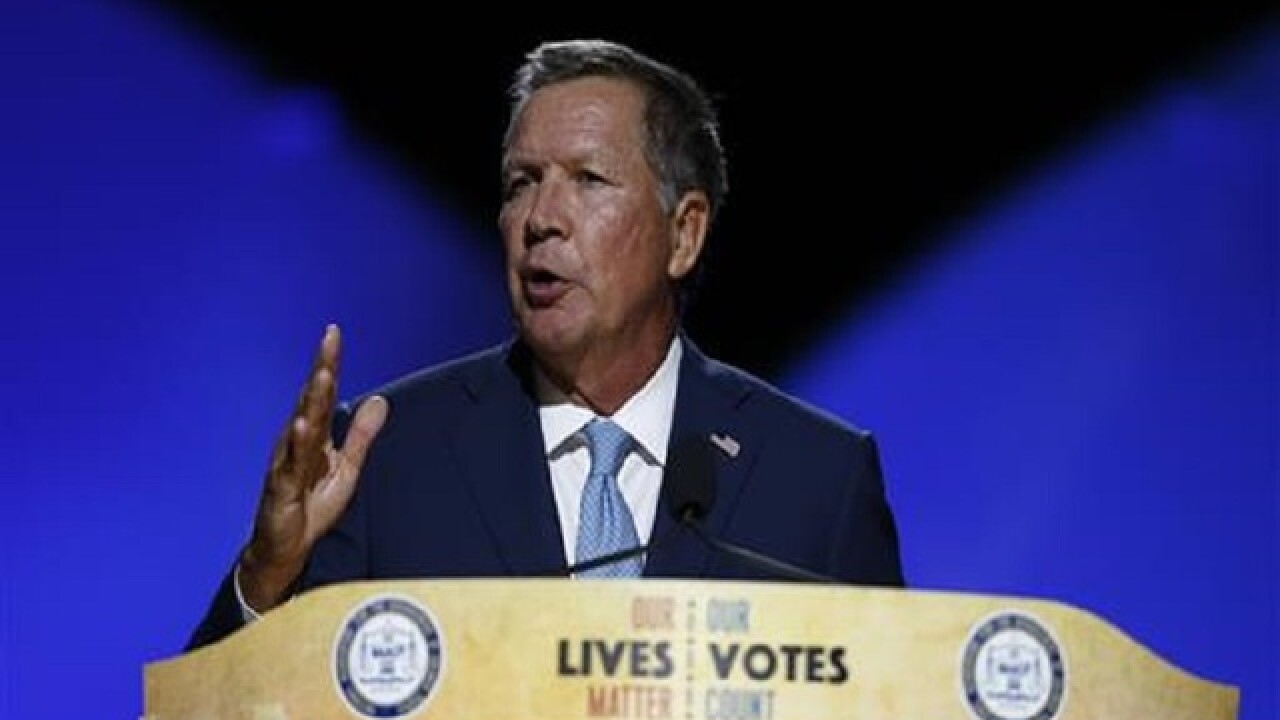 CINCINNATI (AP) — Ohio Gov. John Kasich condemned the slayings of police officers Sunday while urging that people work together for healing in a speech sprinkled with biblical references at the NAACP national convention.
Three officers were killed earlier Sunday in Baton Rouge, Louisiana, in the latest violence involving police across the country, and the Republican said he learned just before taking the stage Sunday evening of the shooting of a police officer in Milwaukee. That officer was seriously wounded, police said.
"And I know everyone in this ... auditorium condemns these terrible murders," Kasich said, as his audience burst into applause. "The Lord wants us to heal. The Lord wants us to work together. The Lord doesn't want violence."
In his address Sunday evening, Kasich described his Ohio initiative for a statewide collaborative effort on police-community relations. The bipartisan special board, which grew from a series of police shootings of blacks in the state, has been working on statewide policy for use of deadly force, improving recruiting of police to reflect more community diversity, developing data collection, and improving police-community understanding from both sides.
Presumptive Democratic presidential nominee Hillary Clinton will speak to the convention Monday morning. GOP presumptive nominee Donald Trump turned down the NAACP's invitation, with the Republican National Convention starting Monday in Cleveland.
Kasich, who opposed Trump for the GOP nomination, has declined to endorse Trump and won't speak at his party's convention in his home state. Kasich has disagreed with Trump's attacking style and presented himself as a more unifying, positive candidate.
"See, I think we all want the same thing," Kasich said. "We all want our children to do well. We all want peace and tranquility in our neighborhoods."
At a convention that warmed up for its evening session with rousing gospel music, Kasich quoted from the Bible: "Love God; love your neighbor, as you love yourself. ... Think about what that means in the way we approach others; even those that we may not agree with. Or some that we significantly disagree with."
The audience applauded several times during his speech and at the close. Republican presidential nominee Mitt Romney got booed at the 2012 NAACP convention when he told attendees he'd be better for black families than President Barack Obama had been.
Copyright 2016 The Associated Press. All rights reserved. This material may not be published, broadcast, rewritten or redistributed.