Newton on path toward Mexico's border with Arizona 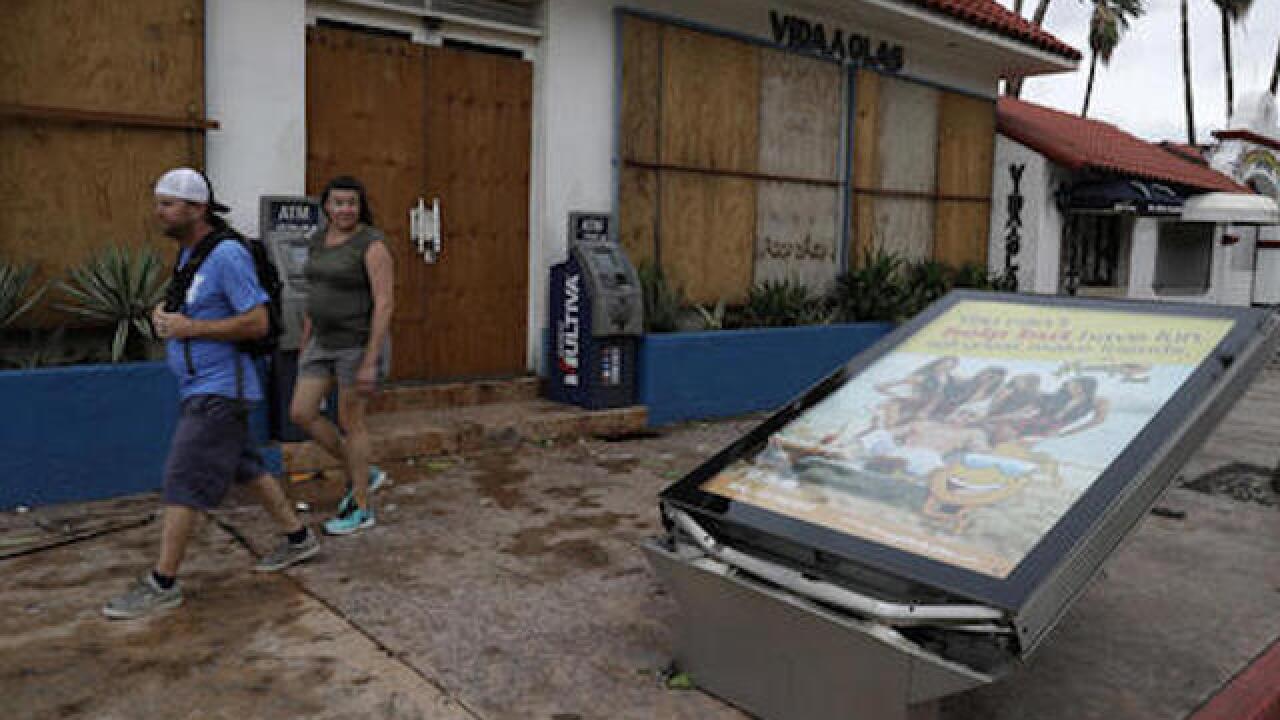 Copyright Associated Press
Eduardo Verdugo
<p>A couple walks next to an advertisement toppled by Hurricane Newton in Cabo San Lucas, Mexico, Tuesday Sept. 6, 2016. Hurricane Newton shattered windows, downed trees and knocked out power in parts of the twin resorts of Los Cabos on Tuesday, but residents were spared the kind of extensive damage seen two years ago when they were walloped by a monster storm. (AP Photo/Eduardo Verdugo)</p>

CABO SAN LUCAS, Mexico (AP) — Newton swept onto the Gulf of California after slamming the resorts of southern Baja as a hurricane before making landfall Mexico's mainland and weakening to a tropical storm.

And the storm remained on a path Wednesday morning that was expected to take it to the U.S. border with potentially dangerous rains for Arizona and New Mexico.

Newton first came ashore near the Los Cabos resorts Tuesday morning as a Category 1 hurricane with winds of 90 mph (150 kph), pelting the area with torrential rain as residents sheltered at home and tourists huddled in hotels. The storm broke windows, downed trees and knocked out power, but the area was spared the kind of extensive damage seen two years ago when they were walloped by a stronger storm.

A shrimp boat capsized in rough seas in the Gulf of California, killing two people and leaving three others missing, authorities said. The boat had set out from the port of Ensenada and was bound for Mazatlan.

After passing over the resort area, Newton headed northward up the sparsely populated interior of the peninsula and then sput out over the gulf during the night. Early Wednesday, its center was about 10 miles (15 kilometers) southeast of Bahia Kino and was moving north at around 17 mph (28 kph) with maximum sustained winds of 70 mph (110 kph).

After passing over relatively little populated areas in Sonora, the U.S. National Hurricane Center said Newton could push into southeastern Arizona in the afternoon and drop 1 to 3 inches of rain there and over parts of New Mexico through Thursday.

About 14,000 tourists were in Los Cabos during the storm, tourism officials said, and visitors began venturing out after Newton passed.

"Just trying to make it through the day, with a little help," Mark Hernandez, a visitor from California, said as he raised a can of beer at one of the few bars open in Cabo San Lucas. "We pray for the city of Cabo San Lucas. It was a rough one as you can see."

Palm trees were toppled along the town's coastal boulevard and some windows were broken. But there was calm in the city as firefighters cleaned refuse from the streets during the day.

In 2014, Los Cabos suffered heavy damage to homes, shops and hotels when it was hammered by Hurricane Odile, which hit land as a Category 3 storm.