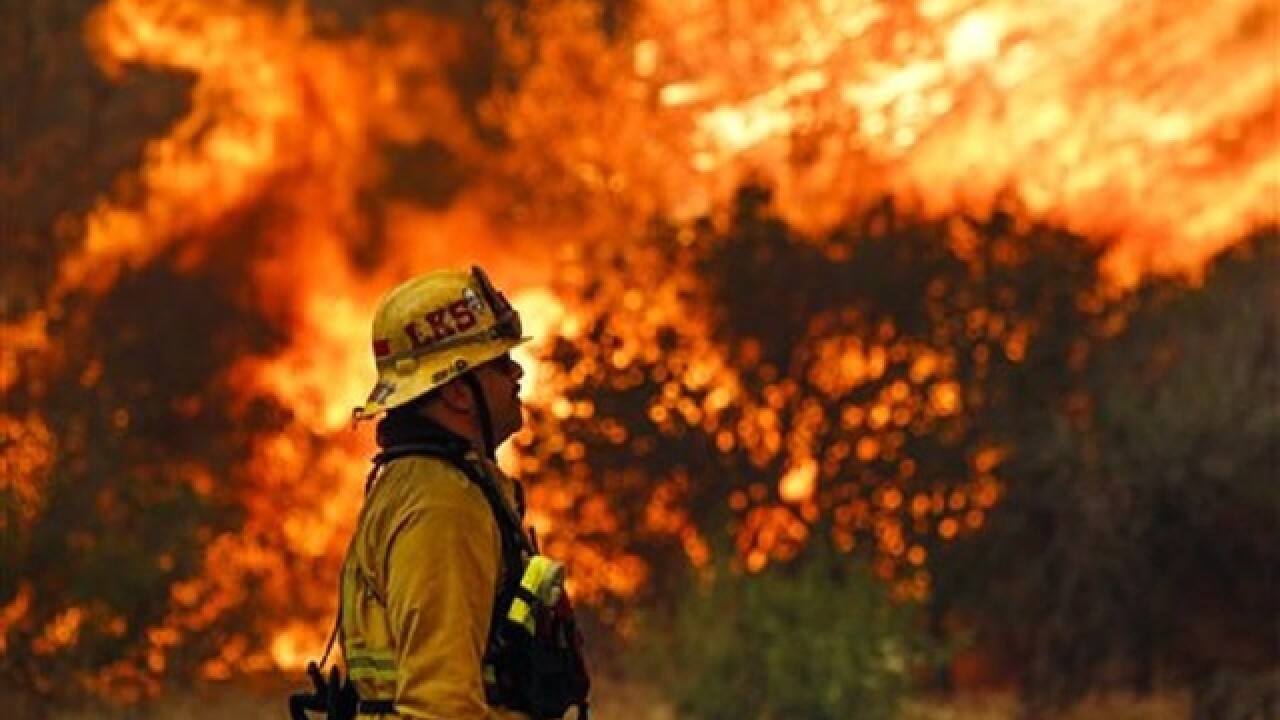 LOS ANGELES (AP) — New wildfires erupted Monday near Los Angeles and chased people from their suburban homes as an intense heat wave stretching from the West Coast to New Mexico blistered the region.
Towering columns of smoke rose from the San Gabriel Mountains as two fires burning less than 2 miles apart devoured brush on steep slopes above foothill suburbs.
Police in the city of Azusa and parts of Duarte ordered several hundred homes evacuated. Others were under voluntary evacuations.
"It's crazy. It's super close," said 17-year-old Tawni Atencio, whose family was evacuating their home in Bradbury.
She said the flames were just a couple miles away and were making the house hot despite air conditioning. She watched as smoke from the fire billowed outside and helicopters dropped retardant on the flames.
"It looked like a bomb exploded," she said. "It's scary. We're just praying it doesn't get to our house."
The two fires grew to a combined 7 square miles and brought fears they could soon merge into one.
The first was sparked by a fatal car crash, the California Highway Patrol said.
The second was much closer to foothill neighborhoods and brought quick evacuations. Its cause has not been found.
"We immediately had homes under threat," Los Angeles County Deputy Chief John B. Tripp said. But then the fire immediately started burning away from the homes, toward the forest. "That was extremely fortunate for us," he said.
A nighttime change in wind direction, however, could return serious danger in a hurry, Tripp said.
Officials had warned of extreme fire danger in the region as the heat peaked. Temperatures surpassed 100 degrees across much of Southern California well before noon, while some desert cities sizzled in the 120s.
Elsewhere, crews made progress against a nearly week-old blaze in rugged coastal mountains west of Santa Barbara. Overnight winds pushed flames into previously burned areas, allowing firefighters to boost containment to more than 50 percent.
Most mandatory evacuations will be lifted Wednesday morning and nearly all by Saturday, authorities said Monday night.
About 270 homes and other buildings were threatened by the blaze, which has charred more than 12 square miles since Wednesday.
Another wildfire was growing near Potrero, a small desert town close to the Mexico border. It surged to nearly 3 square miles amid triple-digit temperatures and forced the evacuation of about 75 people from the ranching community about 40 miles southeast of San Diego.
Three firefighters suffered heat-related injuries and were taken to a hospital for evaluations.
Other blazes burned wide swaths across Arizona and New Mexico, where firefighters also faced blistering temperatures.
In central New Mexico, a 28-square-mile fire that erupted last week and destroyed 24 homes in the Manzano Mountains south of Albuquerque was largely uncontained. Higher humidity overnight allowed crews to strengthen lines around the fire.
Farther north, a small blaze ignited in a popular recreation area where Santa Fe National Forest officials considered some youth camps and campgrounds threatened. Both camps posted social media updates saying the facilities were fine and there was no immediate threat.
In eastern Arizona, a fire doubled to nearly 42 square miles and led officials to warn a community of 300 residents to prepare to evacuate. The blaze on the Fort Apache Indian Reservation southwest of Show Low was not moving quickly toward the community of Cedar Creek because of sparse vegetation and shifting winds.
Copyright 2016 The Associated Press. All rights reserved. This material may not be published, broadcast, rewritten or redistributed.