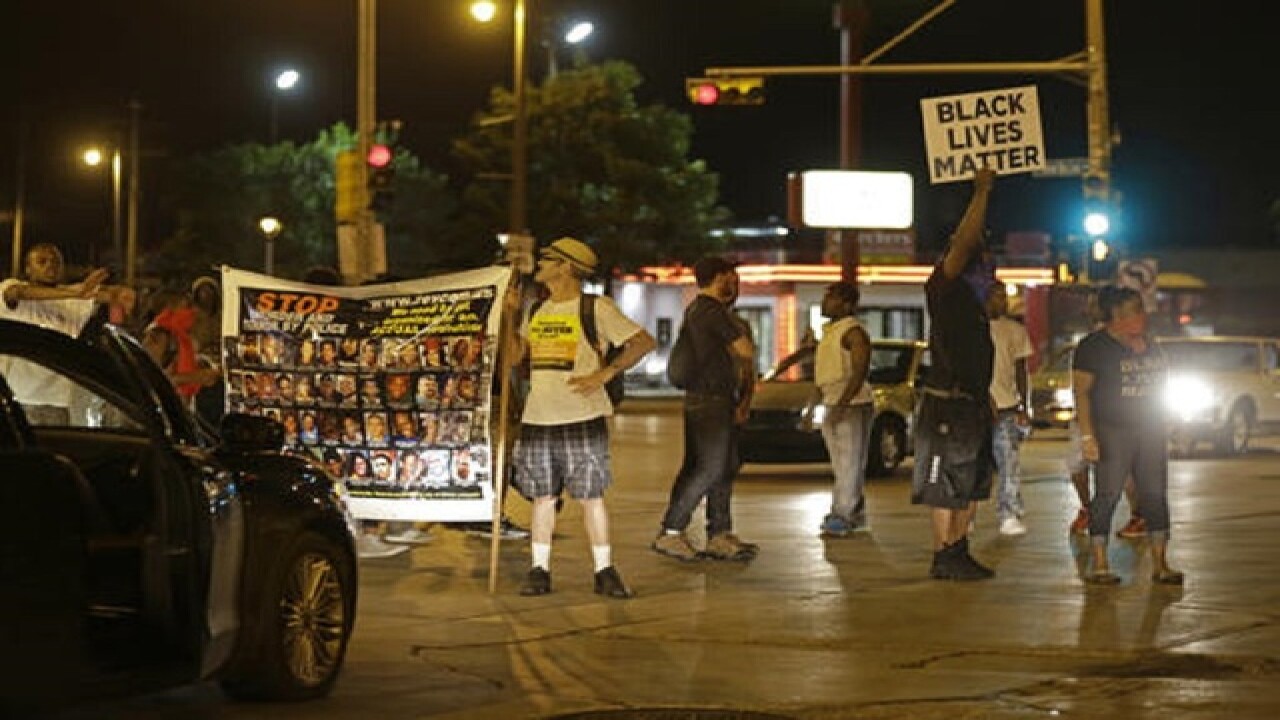 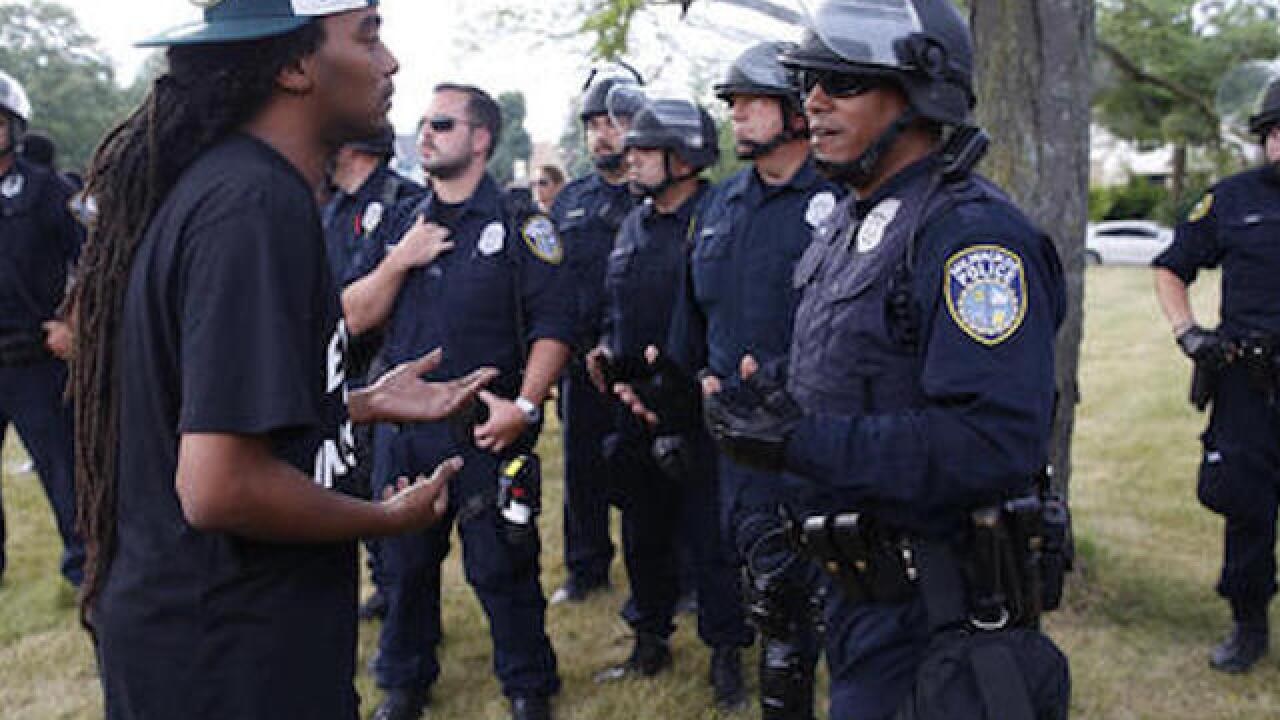 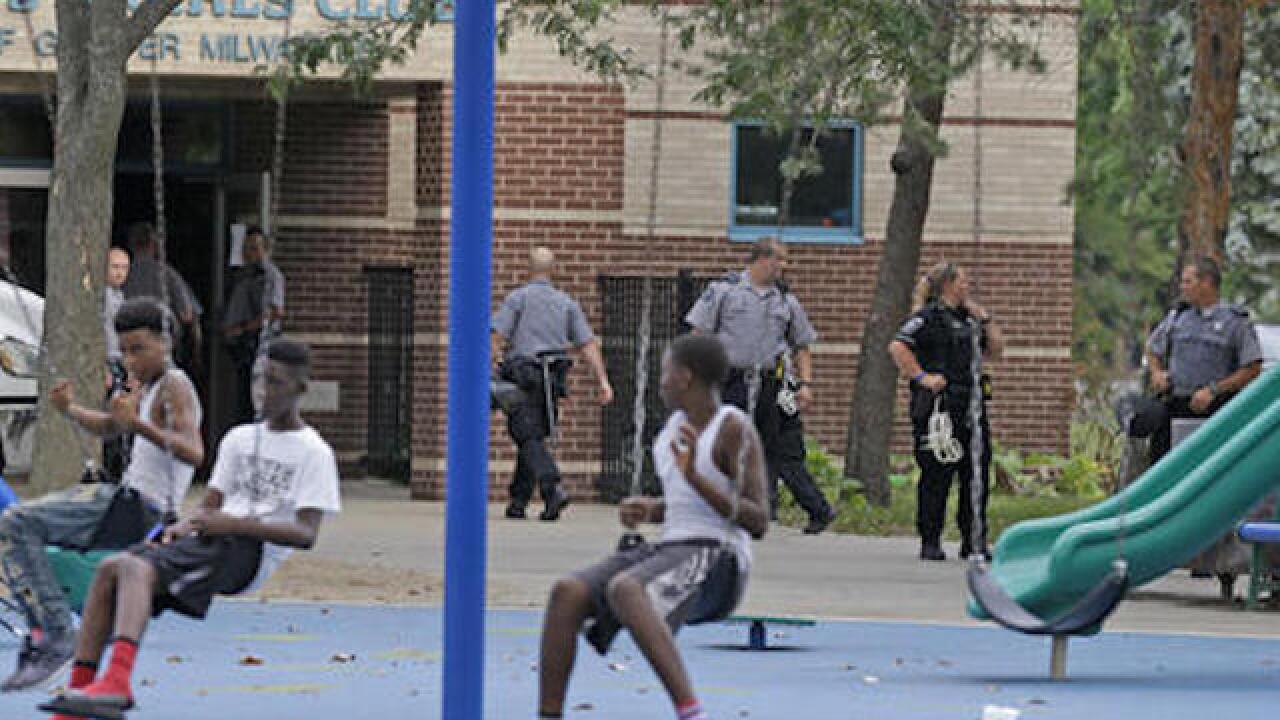 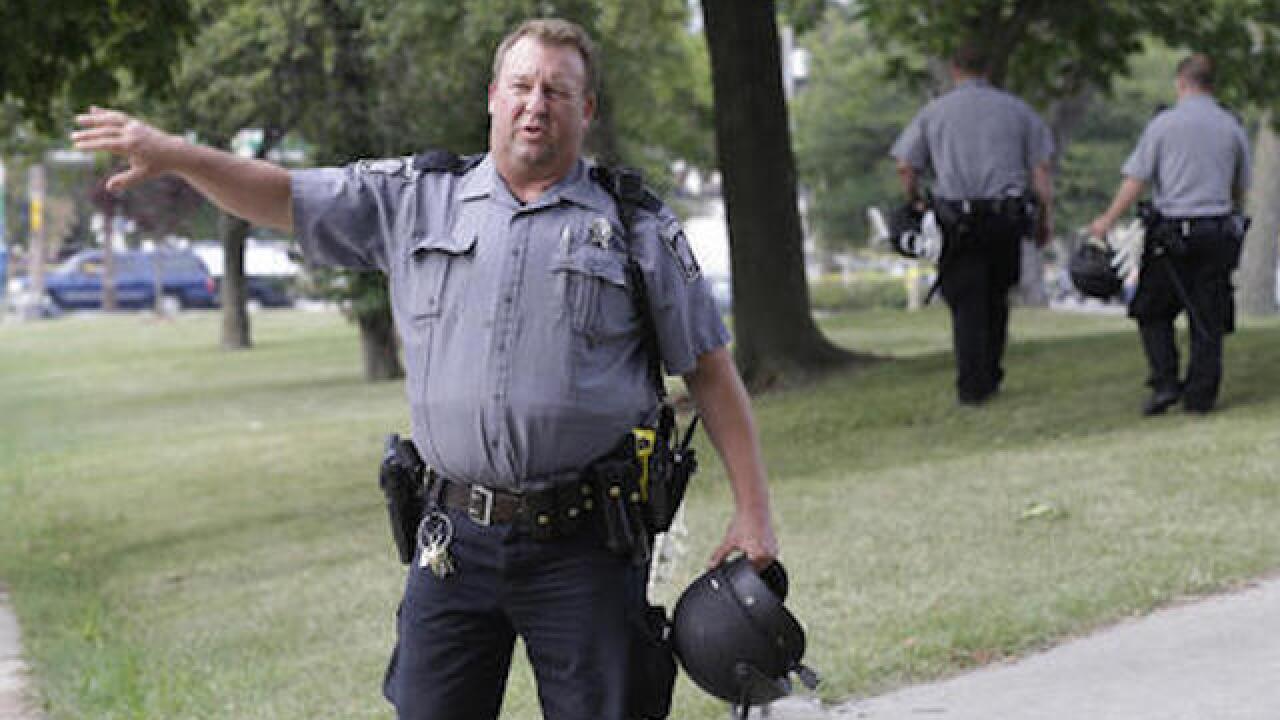 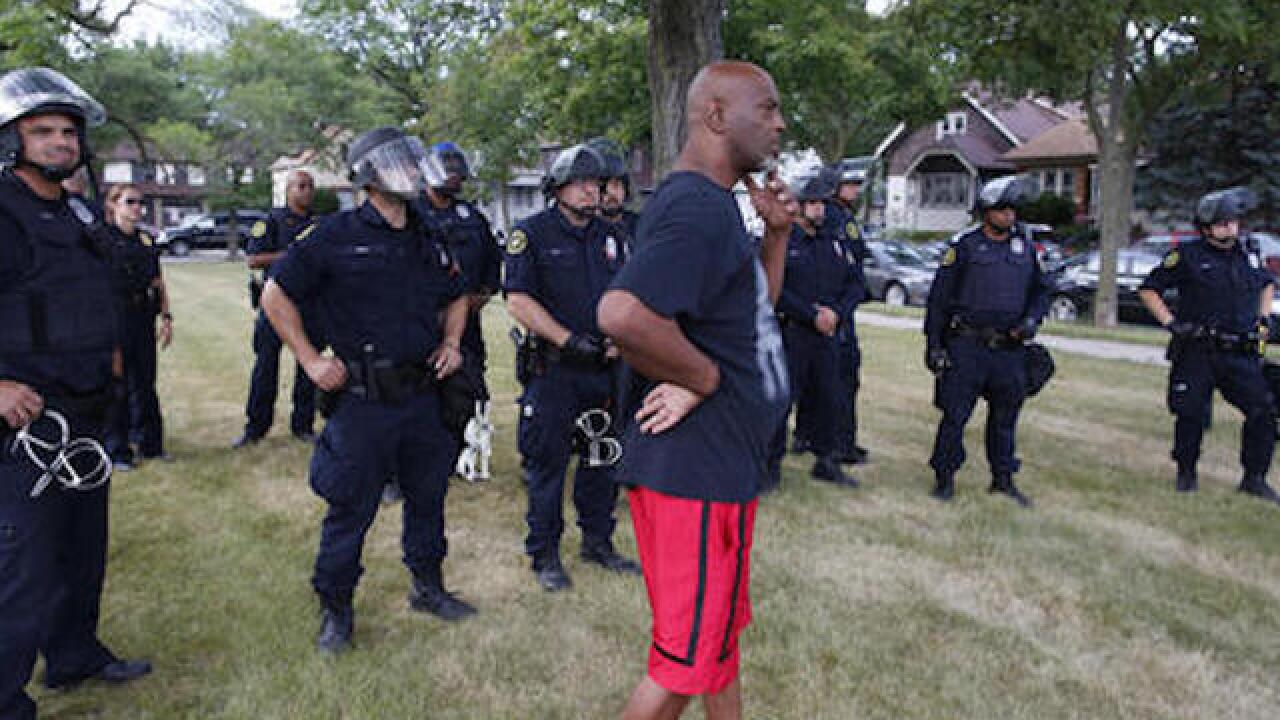 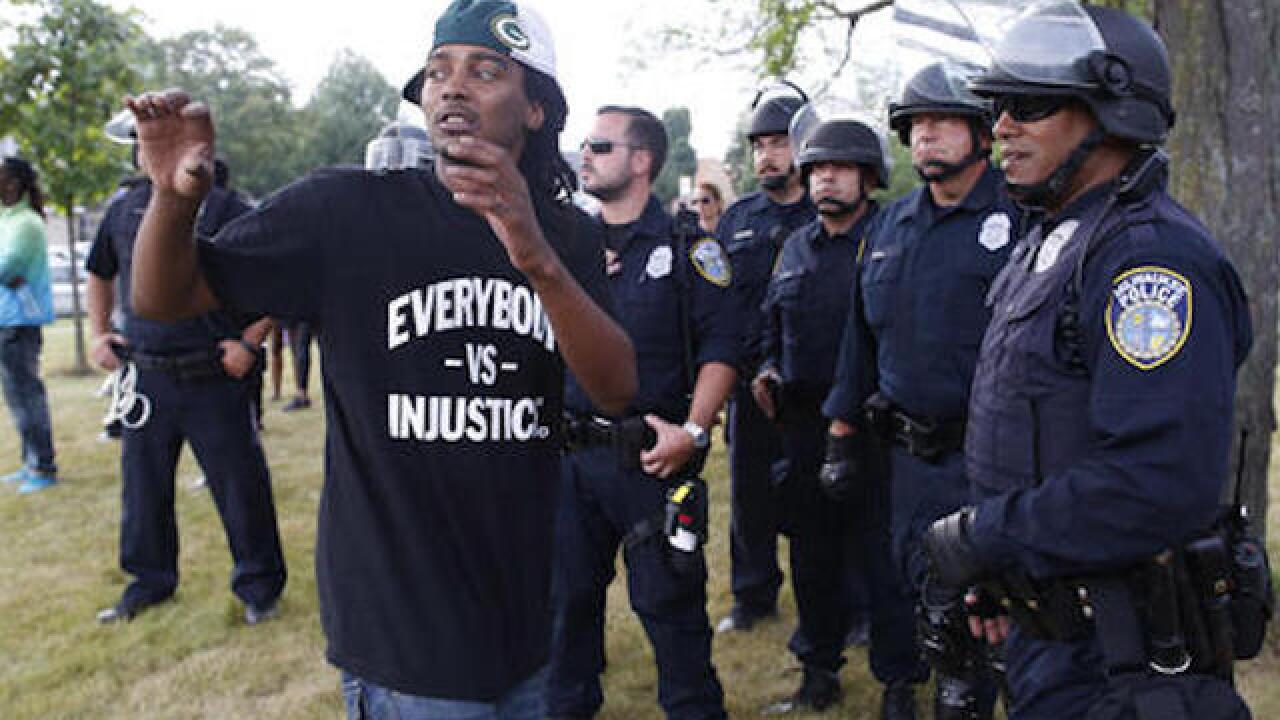 MILWAUKEE (AP) — Following a night of violence that left half a dozen businesses in flames, the Milwaukee police chief expressed surprise at the level of unrest that erupted after the fatal shooting of a black man by a black officer.

"This was, quite frankly, unanticipated," Police Chief Edward Flynn said Monday, two days after the worst of the rioting hit the Sherman Park neighborhood on the city's economically depressed and largely black north side.

The city was calmer on Monday evening after two nights of unrest. Six arrests were made after some "heated confrontations" but there was no destruction of property or rioting, Flynn said. A 10 p.m. curfew for those under the age of 18 appeared to be honored with the aid of community leaders and parents, Milwaukee Mayor Tom Barrett said.

The chief's statement raised questions about whether authorities could have taken steps to curb the violence, perhaps by sharing details of the shooting earlier, including the officer's race or footage from his body camera.

Randolph McLaughlin, a Pace University law professor and a civil rights attorney, questioned how Milwaukee leaders could have expected the streets to stay quiet on Saturday night given the national debate about law enforcement and race.

"For a mayor to say everything's fine (and) we just killed somebody, that's turning a blind eye to his town," McLaughlin said.

He said Barrett should have reached out to residents and community leaders and asked: "What do we need to do to make sure your community is safe?" McLaughlin said. "He needs to stay on the job."

David Klinger, a University of Missouri-St. Louis sociology professor who studies police use of deadly force, said it would not necessarily have helped for police to release the officer's race sooner. He pointed out that the city saw disruptions on Sunday night, after his race had been publicized, though less intense than the previous night.

He also said the city may have hesitated to give the officer's race sooner for fear it would identify him.

Remy Cross, a criminologist at Webster University in St. Louis, said the officer's race probably does not matter to many people in the community.

"They see the institution as racist, not the individual," Cross said. "Once you put on the uniform, you're blue, and blue sees black as bad."

Flynn said it was "an error in narrative to assume" that because police shot someone that the shooting will be controversial "so let's have a riot."

Cecil Brewer, 67, who owns an apartment house directly across from the intersection where protesters burned a gas station on Saturday night and hurled rocks at police on Sunday night, said the rioting was all but inevitable.

"There's so much anger in these kids," Brewer said. The shooting "was like a spark in a powder keg. It doesn't matter to them if what the authorities are saying is true."

The problems began Saturday afternoon when police stopped a rental car that was driving suspiciously, Flynn said. Sylville Smith bolted from the car with a gun, leading an officer on a short foot chase before the officer shot the 23-year-old man. Police said Smith was fleeing a traffic stop but released few other details.

The violence erupted later that evening.

During a news conference around midnight calling for calm, Barrett said people were gathering at the scene when he left at 5 p.m. Saturday, but they were peaceful and he thought everything was under control.

At another news conference Sunday afternoon, Flynn offered new details, revealing that the officer who opened fire was black, like Smith, and said body-camera video showed Smith had turned toward the officer and refused to drop his weapon. He also said the officer shot Smith in the chest and arm. Some people interviewed on the north side had speculated that Smith was shot in the back.

The body-camera footage has not been released. It's in the custody of the state Justice Department, which is leading the investigation into the shooting.

Flynn activated the department's 150-member crowd-control team on Sunday night, and Gov. Scott Walker put the National Guard on standby. Hundreds of people gathered near the scene of the shooting that evening, but remained peaceful. Most of them eventually dispersed.

Around 10:30 p.m., however, a group of perhaps 100 demonstrators began marching through the streets, eventually blocking an intersection next to a BP gas station that burned down the night before. They threw bottles, chunks of concrete and rocks at officers. Dozens of officers arrived and forced the group down the street.

Seven officers were injured and 14 people were arrested by the time it was over. An 18-year-old man was shot near the intersection. Police had to use an armored vehicle to rescue him. He was taken to a hospital, but Flynn said his life was not in danger.

Smith's death was just the latest in a string of shootings involving police and black men to spark demonstrations and protests.

In Baton Rouge, Louisiana, where 37-year-old Alton Sterling was fatally shot in July during a struggle with two white police officers, protests largely dissipated after three law enforcement officers were killed in a shooting attack that appeared to target police. Demonstrations also unfolded after 32-year-old Philando Castile was shot and killed in suburban St. Paul, Minnesota, during a traffic stop by a Latino police officer. Those protests dwindled in the ensuing weeks.

DeShawn Corprue, 31, who lives behind the burned-out BP station, said nothing that police released about Smith's death would have stopped the weekend's unrest.

"People are just so angry," he said.

Flynn blamed a Chicago chapter of the Revolutionary Communist Party for coming to town and inciting Sunday's violence.

"There is ample opportunity for second-guessing, I'm sure," Flynn said.