Mexico says 98 migrants to be deported after US border clash 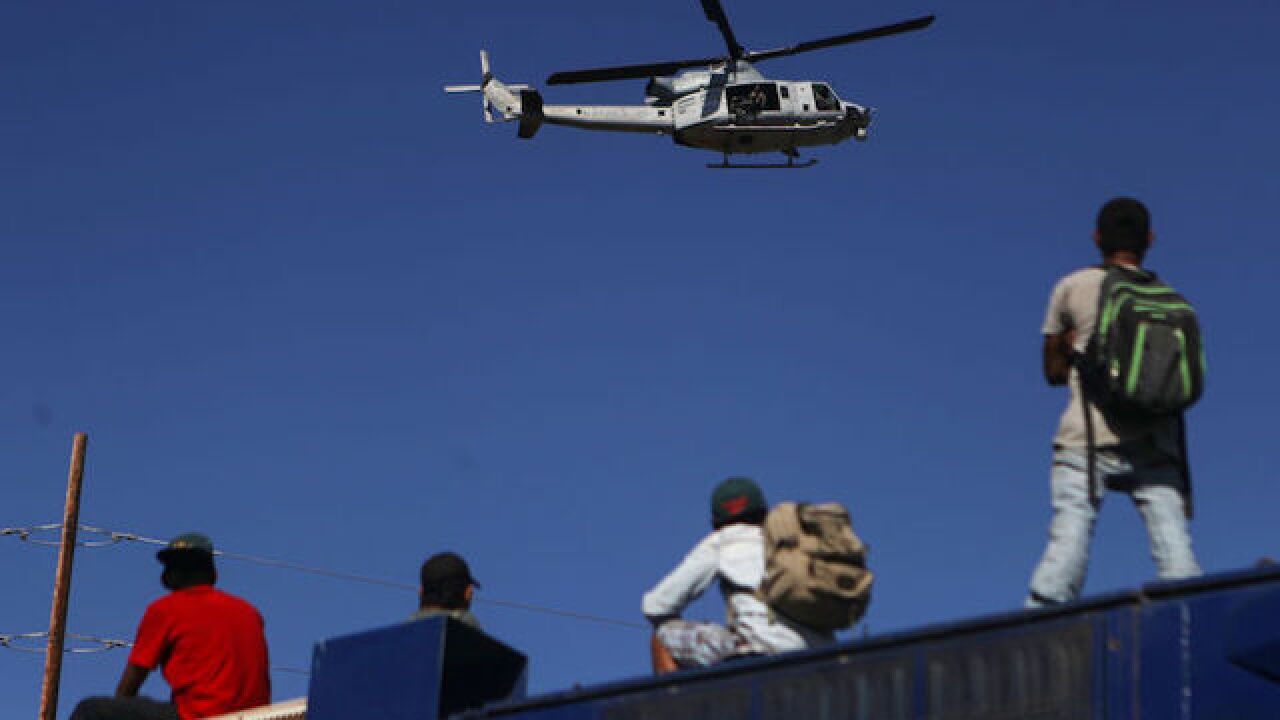 Image copyright 2018 Getty Images. All rights reserved. This material may not be published, broadcast, rewritten, or redistributed.
Mario Tama
<p>A U.S. Marine helicopter patrols above migrants gathered atop a train car near the U.S.-Mexico border fence on November 25, 2018 in Tijuana, Mexico. Migrants made their way to the location along the border after circumventing a police blockade as they attempted to approach the El Chaparral port of entry. U.S. Customs and Border Protection temporarily closed the two ports of entry on the border with Tijuana in response. Around 6,000 migrants from Central America have arrived in the city with the mayor of Tijuana declaring the situation a 'humanitarian crisis'.</p>

Nearly 100 migrants will be deported following an incident Sunday in which hundreds of people rushed the US-Mexico border, Mexican authorities say.

About 500 migrants on the Mexican side of the border overwhelmed police blockades near the San Ysidro Port of Entry on Sunday, two journalists in Tijuana told CNN. US Customs and Border Protection, which said that as many as 1,000 people tried to enter the US illegally, said the migrants threw projectiles that struck several US Border Patrol agents.

Agents fired tear gas at the group. Video of the scene showed a cloud of tear gas that sent people running and screaming, including families with young children.

The incident forced a temporary closure of the major border crossing into San Diego.

On the US side, 69 people were arrested for illegally crossing the border, CBP said. Tijuana police said they arrested 39 people Sunday on the Mexican side.

Mexico's Interior Ministry said Monday that 98 migrants would be deported following the incident.

It was not clear from the ministry's statement how many of the migrants were among those arrested on Sunday or when the deportations would take place.

Sunday's incident began with a march to the border that organizers said would be peaceful. In response, CBP deployed additional personnel to San Ysidro in expectation of demonstrations on both sides of the border.

But as migrants reached the border area, some protesters split off toward multiple locations, CBP said, attempting to gain entry to the US through the port and "directly east and west" of it.

Mexico's Foreign Ministry has asked the United States to investigate US Border Patrol agents' use of tear gas on migrants attempting to cross the border. In a diplomatic memo to the US Embassy in Mexico City on Monday, Mexico's Foreign Ministry requested an "exhaustive investigation" into the use of non-lethal weapons by the United States toward Mexico, the ministry said in a statement.

The ministry said Mexico is committed to protecting the human rights and security of the migrants and reiterated that tight cooperation was needed to deal with the migrant situation "with a focus on shared responsibility."

The US government has stood by its use of tear gas to disperse migrants attempting to rush the border. US Customs and Border Protection said on Sunday that some migrants were throwing rocks at Border Patrol agents, prompting the agents to respond with force to protect themselves.

President Donald Trump said on Monday that the tear gas was "very safe." He questioned why parents were approaching the border with children at all, suggesting that some of the adults "grabbed" children to better their chances of entering the US.

When asked for evidence of that claim by reporters, Trump -- who was speaking at a roundtable event in Mississippi -- demurred.

"It's a term that's used because, as you know, many people, it's a very violent, horrible thing, that they feel they have an advantage when they're with a young child, and they call them grabbers," he said.

In a statement Monday night, Homeland Security Secretary Kirstjen Nielsen said some members of the group are using women and children as "human shields."

"The caravan members are predominately male. It appears in some cases that the limited number of women and children in the caravan are being used by the organizers as 'human shields' when they confront law enforcement," Nielsen said.

The incident at the San Ysidro crossing marked an escalation of tensions that have been mounting since groups of Central American migrants began arriving in Tijuana a few weeks ago on their journey to attempt entry into the United States.

The migrants' presence has drawn demonstrators -- for and against them -- and threats from Trump to close the US-Mexico border. Meanwhile, Tijuana's mayor has called on the Mexican government and the international community for help.