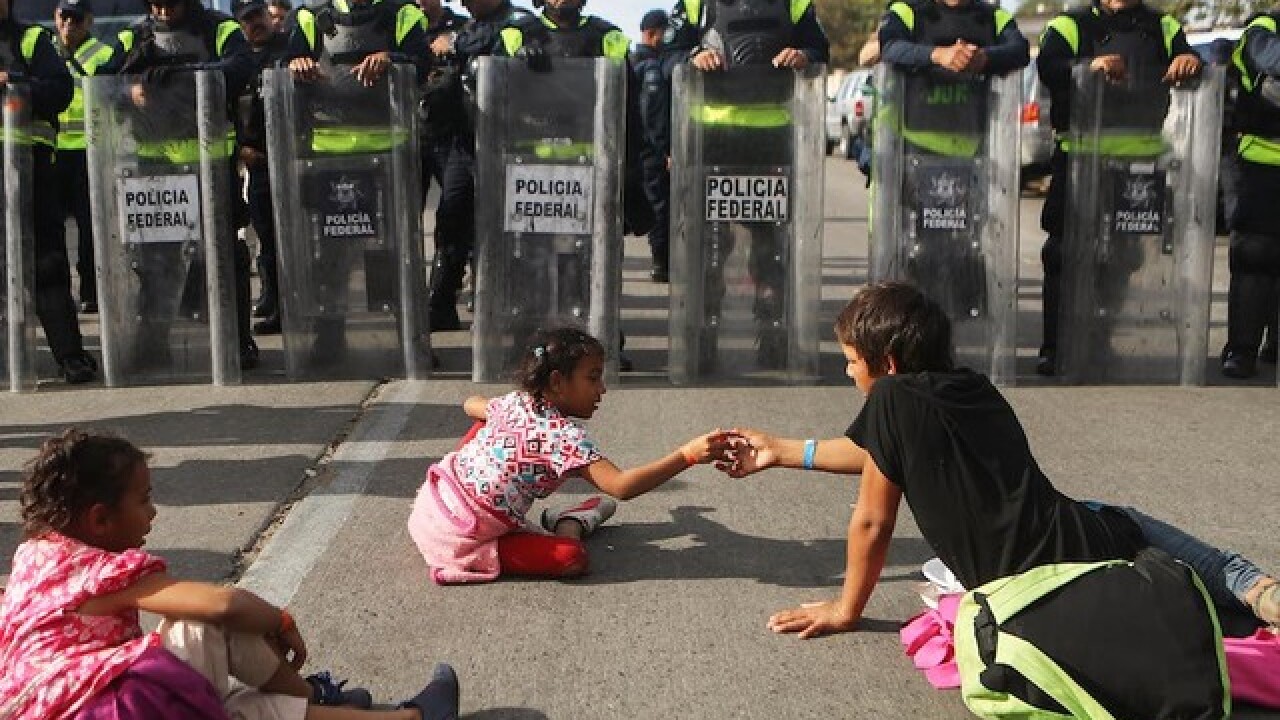 Image copyright 2018 Getty Images. All rights reserved. This material may not be published, broadcast, rewritten, or redistributed.
Mario Tama
<p>Migrant children, part of the 'migrant caravan', sit in front of Mexican riot police outside the El Chaparral port of entry on November 22, 2018 in Tijuana, Mexico. Parts of the migrant caravan have been arriving to Tijuana after traveling for more than a month through Central America and Mexico to reach the U.S. border. President Donald Trump today threatened to close the U.S.-Mexico border if the arrival of migrants leads to a loss of 'control' on the Mexican side. </p>

Mexico's incoming government on Saturday night denied that an official deal had been made regarding migrants staying in the country before entering the United States, Mexico's incoming interior secretary, Olga Sánchez Cordero, said according to a statement acquired by CNN.

The statement is at odds with a previous report by The Washington Post, which had claimed that the incoming Mexican government supported a Trump administration plan that would require individuals seeking asylum to remain south of the US border while their applications are being processed.

In the statement Saturday night, Sánchez Cordero explained that the next administration does not have any plans to make Mexico a "third safe country" for migrants.

"Mexico's next federal administration does not consider within its plans that Mexico assume the condition of "third secure country" for the attention of Central American migrants or citizens of other countries in Mexican territory or those who will have that intention in the future," Sánchez Cordero said in the statement.

She added that the incoming administration will focus on ensuring the migrant caravans will receive help in accessing food, health, shelter and protection of their human rights.

However, according to The Post, the plan, called "Remain in Mexico," emerged after a meeting in Houston last week that included Mexico's incoming foreign secretary, Marcelo Ebrard, Secretary of State Mike Pompeo, Homeland Security Secretary Kirstjen Nielsen, and other high ranking US officials, US and Mexican officials told the Post.

Regarding the deal with Mexico, White House spokesman Hogan Gidley said in a statement: "President Trump has developed a strong relationship with the incoming Obrador Administration, and we look forward to working with them on a wide range of issues."

On Saturday evening, President Donald Trump tweeted about the border, saying he would close the US' southern border if necessary.

"Migrants at the Southern Border will not be allowed into the United States until their claims are individually approved in court. We only will allow those who come into our Country legally. Other than that our very strong policy is Catch and Detain. No "Releasing" into the U.S..." Trump wrote in his first tweet.

He continued in a subsequent one: "....All will stay in Mexico. If for any reason it becomes necessary, we will CLOSE our Southern Border. There is no way that the United States will, after decades of abuse, put up with this costly and dangerous situation anymore!"

In a statement Thursday, Pompeo said that he, Nielsen and Ebrard had met "to discuss the migrant caravans."

"We have affirmed our shared commitment to addressing the current challenge," he said. "The caravans will not be permitted to enter the United States."

US officials began receiving guidance on "Remain in Mexico" this week and were told it could be implemented soon, the Post reported, but US and Mexican senior officials stressed that elements of the plan had not yet been established and that no formal agreement has yet been signed.

If put into effect, the new policy would end the current practice of asylum seekers remaining in the United States while their applications are processed, disparaged as "catch and release" by Trump, who is a vocal opponent of the practice.

US officials told the Post that they hope to pilot the policy at San Diego's San Ysidro border crossing before potentially expanding it to five to seven other ports of entry along the southern border.

"For now, we have agreed to this policy of Remain in Mexico," Sánchez Cordero -- López Obrador's top domestic policy official as Mexico's interior secretary-elect -- told the Post, calling it a "short-term solution."

"The medium- and long-term solution is that people don't migrate," Sánchez Cordero also said to the Post. "Mexico has open arms and everything, but imagine, one caravan after another after another, that would also be a problem for us."

James McCament, Acting Homeland Security Under Secretary for Policy, said in a statement Saturday that the United States has been working with the current and impending Mexican governments "to identify and address shared issues of concern."

"These include our joint desire to promote beneficial legitimate trade and travel, interest in ensuring that those traveling to our borders do so safely and orderly, concern for the safety and security of vulnerable migrant populations, and respect for each nation's sovereignty," McCament added. "We appreciate the leadership and partnership the Mexican government has shown on these and other challenging issues."

Under the new policy, applicants seeking asylum at ports of entry would receive a credible fear screening and remain in the United States until their initial appearance with an immigration judge, according to the Post.

Two US officials speaking anonymously told The Post that the new policy would allow the government to double the number of asylum claims it could process, as it would no longer be limited by detention space.