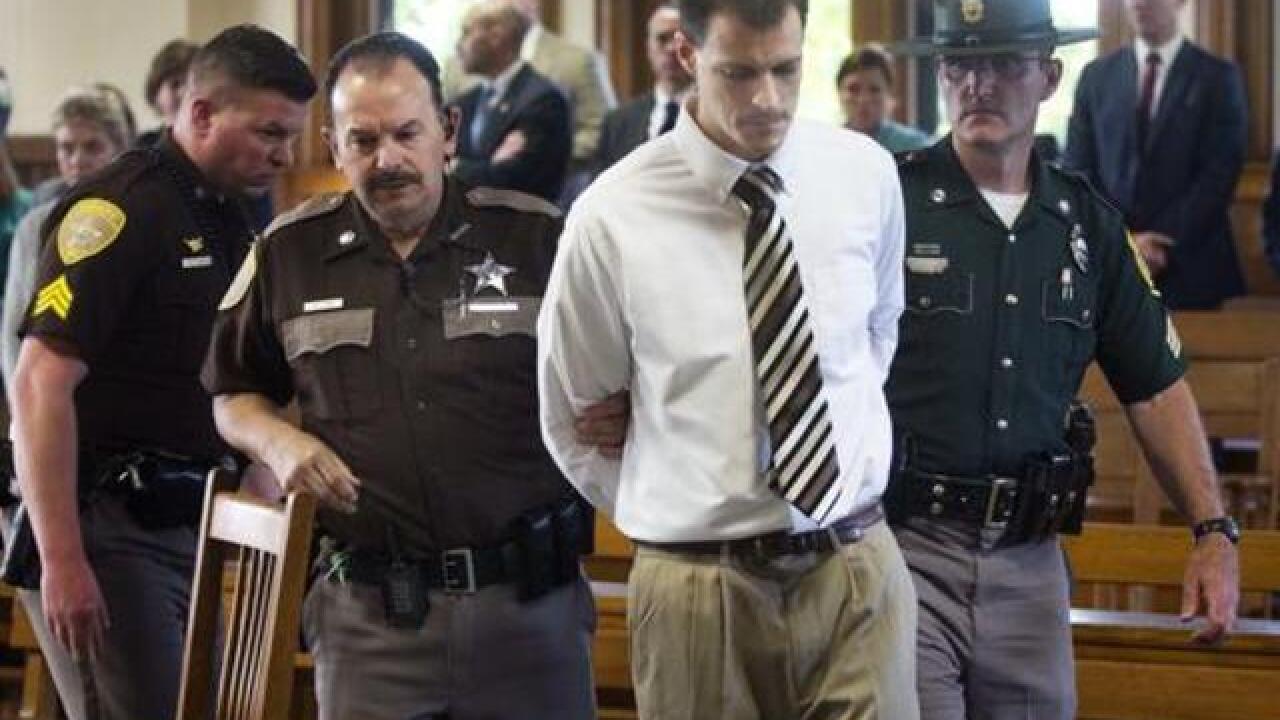 Jim Cole
<p>Nathaniel Kibby is escorted out of the Belknap County Superior after pleading guilty and being sentenced 45-90 years in prison for kidnapping, rape, criminal threatening and witness tampering Thursday May 26, 2016 in Laconia, N.H. (AP Photo/Jim Cole)</p>

By: Associated Press
Posted at 5:52 PM, May 26, 2016
LACONIA, N.H. (AP) — A man who kidnapped a 14-year-old girl when she accepted his offer of a ride home from school because her feet were sore, held her in captivity for nine months and raped her repeatedly at his trailer acknowledged his crimes on Thursday.
Nathaniel Kibby pleaded guilty to kidnapping, aggravated felonious sex assault and criminal threatening, and prosecutors asked for a sentence of 45 to 90 years in prison for him.
Kibby, who had pleaded not guilty shortly after his arrest, had been scheduled to go on trial next month on nearly 200 felony charges related to the girl's October 2013 disappearance and the months that followed. But he changed his plea to guilty at a hearing on Thursday.
Before the 35-year-old Kibby could enter his new plea, a prosecutor said Kibby had kidnapped the girl by offering her a ride home from her school and then brandishing a gun when she attempted to get out of his car.
Prosecutor Jane Young said the girl and Kibby didn't know each other and she accepted the ride because she'd worn boots to school and her feet were blistered. Young said when the girl tried to get out of the car in a parking lot Kibby pulled out the gun and threatened to "blow her brains out."
Kibby also pleaded guilty to witness tampering and other offenses. Last week, a judge ruled Kibby's lawyers could not question the girl before his trial about her exposure to media coverage and the amount of freedom she was given to move about his trailer in Gorham, where prosecutors say he used a stun gun, zip ties and a shock collar to control her.
Kibby was charged with kidnapping the girl on Oct. 9, 2013, as she walked home from her high school in Conway. The girl returned to her home in North Conway the night of July 20, 2014, but prosecutors have not elaborated on the circumstances of her return. She waited until a week after she was home to reveal Kibby's identity. She was able to identify Kibby because she spotted his full name inside a cookbook in his home.
Lawyers hired by the girl's family said she had suffered "numerous acts of unspeakable violence" during her months of captivity. Their statement was largely a plea for privacy and did not elaborate on what she endured. The girl, who is now 17 years old, attended Thursday's hearing.
Copyright 2016 The Associated Press. All rights reserved. This material may not be published, broadcast, rewritten or redistributed.